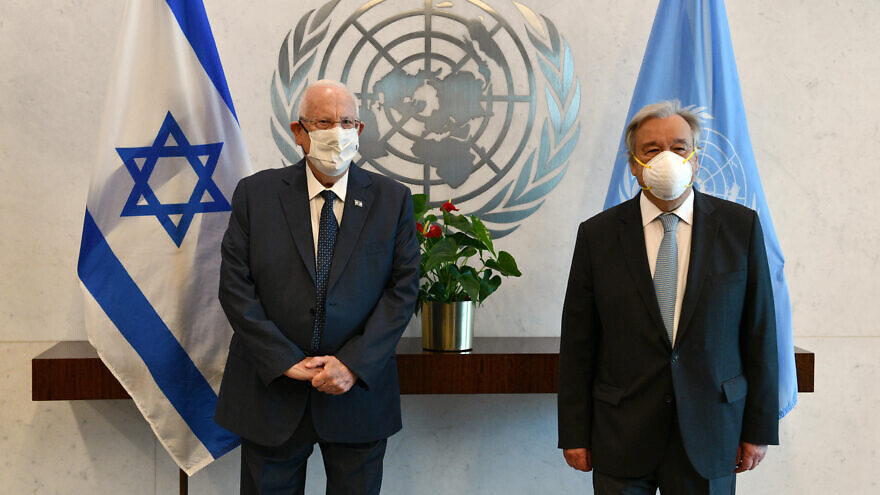 Israeli President Reuven Rivlin met with U.N. Secretary-General Antonio Guterres on Tuesday at the U.N. headquarters in New York as part of his farewell tour of the United States.

During the meeting, Rivlin addressed anti-Israel bias in the U.N. and called for it to end.

“Our region, the Middle East, needs trust between people. Peace between Israel and the Palestinians will never ever be achieved by anti-Israeli resolutions or investigation committees,” Rivlin told Guterres according to a news release.

Rivlin was accompanied by Lea Goldin, mother of Hadar Goldin whose body is being held by Hamas in Gaza.

“We are interested in continuing to work with the U.N. to provide humanitarian assistance to the people of Gaza, with whom we have no conflict,” Rivlin said. “However, any agreement should include steps to return our soldiers and citizens, who are held by Hamas, a terrorist organization.”

Rivlin later met with ambassadors to the U.N. to talk about the challenges facing Israel considering regional dynamics.

The meeting comes after Rivlin met with U.S. President Joe Biden at the White House on Monday and with members of Congress later that day.

Rivlin has served as Israel’s president for the past seven years and will be replaced by president-elect Isaac Herzog on July 9.