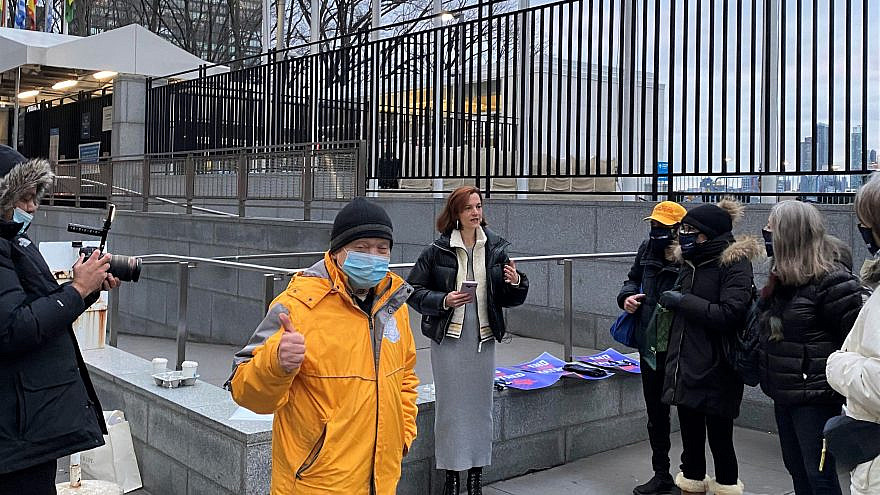 On a blustery day in late January, Holocaust survivor Sami Steigmann, 81, made his debut on Clubhouse—the buzzy, audio-based, social-media platform that launched in the venture capital and Hollywood communities last spring and now connects millions of “regular” folk with celebrities for spontaneous conversations.

Steigmann, who lives below the poverty line in Harlem, N.Y., was preparing to speak outside the United Nations on International Holocaust Remembrance Day for an “End Jew Hated” rally. Jewish rapper Kosha Dillz, a 30-something who assists Steigmann with errands, decided to come along to hear his friend. Inspired by Steigmann, Dillz (whose real name is Rami Even-Esh), helped the octogenarian set up a Clubhouse account, thinking it would be nice for his friend to join a conversation taking place for Holocaust remembrance.

Dillz stressed the value of bringing his friend’s message of tolerance, survivorship and bridge-building to audiences beyond the Jewish world.

“The spaces that would normally host Sami are Jewish places or museums,” said Dillz. “It’s very comfortable to preach to the choir. But that’s not all we need.”

Swig said that amplifying the voices of elders is crucial, especially given Holocaust survivors’ dwindling numbers and the rise in online hate, particularly in this pandemic year. 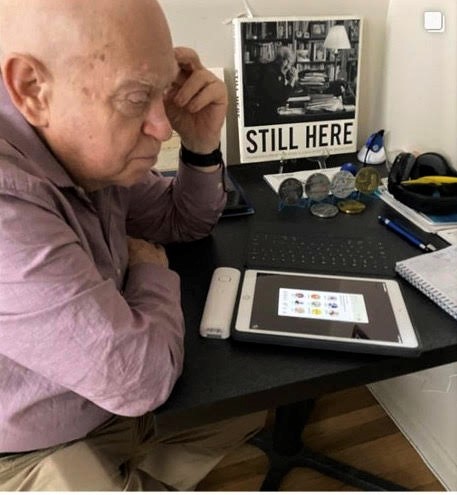 “Kosha [Dillz] and I take ‘Never Again’ very seriously,” said Swig. “It is ingrained in us, and we want to honor these people and their life experiences. … These stories need to be told [and] … the most powerful thing about [using Clubhouse] is it’s in real time; we are all in the same room, you can interact with a survivor.”

The original Clubhouse event with Steigmann wound up lasting 16 hours, five of them comprised of Steigmann taking questions from participants ranging from a government minister in Dubai to German descendants of Nazi SS members. By its conclusion, Steigmann had amassed more than 5,000 followers, and Swig was determined to bring Steigmann’s voice to more hearts and minds.

Steigmann, who feels an urgency to reach more listeners, praised the platform’s reach.

“Clubhouse is gaining speed,” he told JNS. “You never know who will be there, from what country and what the questions will be … a platform where people come in and out … at one point there were 10,000 people, so you have reach.”

Some participants have asked about the Israeli-Palestinian conflict. Swig pointed out that Steigmann has been a “model” for younger listeners in how to civilly respond to anti-Israel sentiment. “I explained that I can’t answer intelligently without context—when, where, and, most important, why did something happen,” said Steigmann. “And I invited them to follow up with me privately for a conversation.”

Asked what he said to descendants of Nazi SS members, Steigmann said he stressed that “children and grandchildren are not guilty of what their grandparents did … not to feel guilty, but not to follow in their footsteps.” 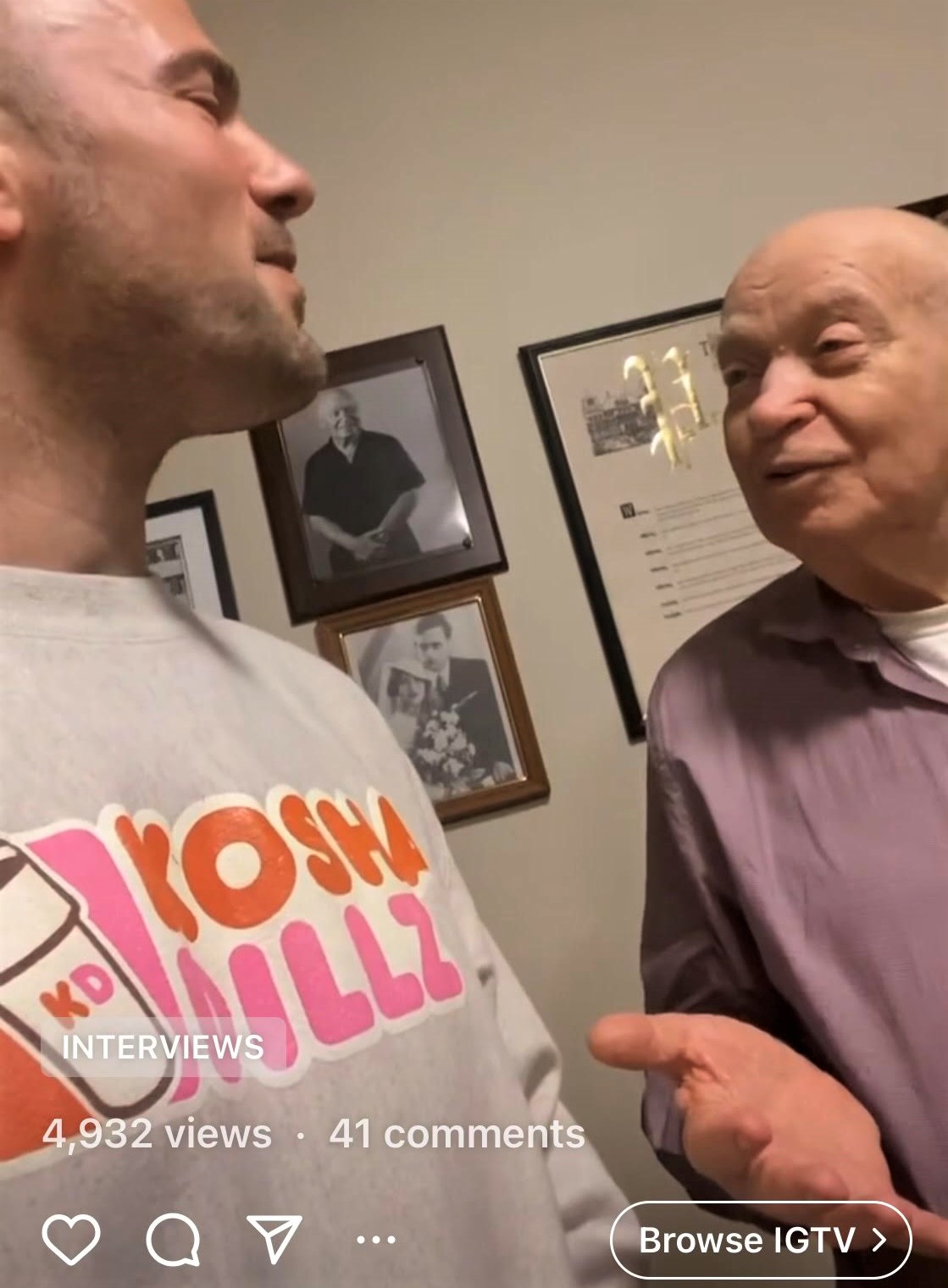 The February event introducing the octogenarian as the first Holocaust survivor on Clubhouse drew in as many as 10,000 participants, including other Holocaust survivors, among them Eva Perlman, author of Eva’s Uncommon Life: Guided by Miracles, a book about her family’s Holocaust survival. It ended up with Steigmann speaking and taking questions for 14 hours straight without a break. Swig recalled that “Sami wanted to take every question, and that marathon session made the ‘Legend of Sami,’ but I was worried about him because that’s a long time.” (One listener, a medical professional, sent Steigmann “kosher steaks” to his Harlem apartment to make sure he was eating during the marathon event).

“It was a surprise because this doctor didn’t even know me,” said Steigmann. “She sent enough steak and French fries for two.” He added, “The steak was excellent.”

Steigmann, who survived Nazi medical experiments performed on him as an infant at the Mogilev-Podolsky Labor Camp in Transnistria, credits his stamina to his training in the Israel Defense Forces when he worked for 36 hours straight repairing Mirage 3-C fighter jets during the 1967 Six-Day War. (After World War II, he and his parents first repatriated to Romania, then ultimately, the family, including a younger sister Betty born in 1946, immigrated to Israel in 1961).

Steigmann is again scheduled to appear on Clubhouse on April 7 at 1 p.m. Eastern Standard Time for Yom Hashoah as part of an event called “Voices from the Holocaust: Meet the Survivors.” It will commemorate Israel’s official Day of Remembrance of the Holocaust, which is also the Hebrew calendar anniversary of the first day of the Warsaw Ghetto Uprising. (The revolt began on April 19, 1943, and ended four weeks later, on May 16.)

“I’ll talk about how Israel is the world’s only Jewish country and to remember Jews did resist; they did not go like sheep,” said Steigmann. “There was not only armed resistance but spiritual, and humanitarian resistance.” He will also point out that the young Warsaw Ghetto fighters “against the mighty German Army, lasted more than a month, longer than many nations in Europe.”

Other survivors set to participate include Perlman. Musical performers will include clarinetist Jonathan Hadas of the Israeli Philharmonic and songwriter/musician Happie Hoffman. 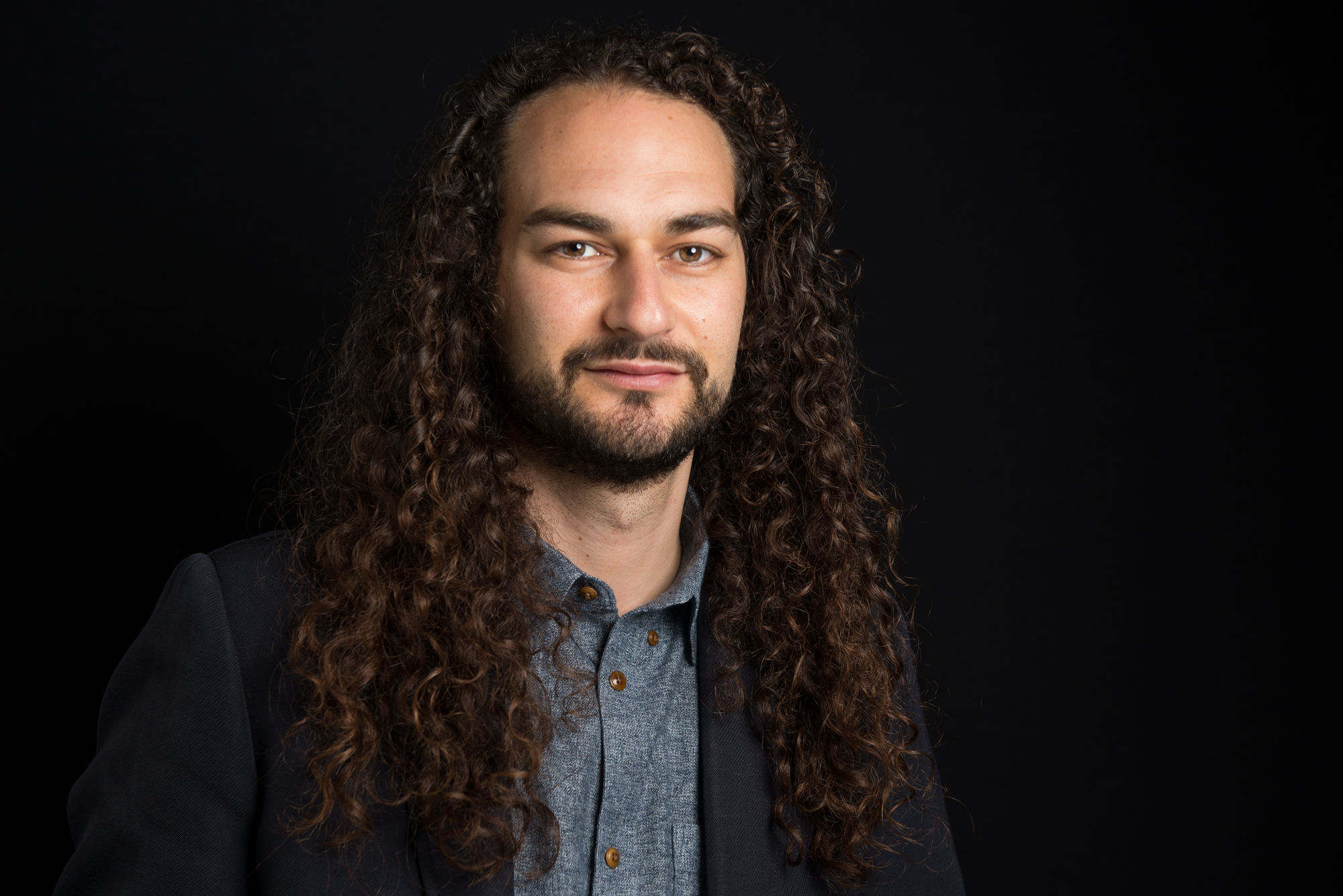 ‘No one has to walk that road again’

Bridge-building between Jewish and other communities has been a theme of Steigmann’s appearances on the platform. Following the welcome event, Swig brought together Steigmann and Dr. Clarence B. Jones, now 90, who served as an attorney for Dr. Martin Luther King Jr. and wrote the book, What Would Martin Say, to discuss King’s legacy.

“I was able to tell Dr. Jones I admired not only what Dr. King accomplished, but the way he accomplished it through nonviolence,” said Steigmann.

Kianta Key, 34, an Atlanta-based social-media strategist who describes herself as a “black woman in the South” with an interest in social justice, was listening when Steigmann appeared on Clubhouse with Jones. Key said she feels grateful to have heard from a “primary source.”

“To hear this Holocaust survivor whose temperament was so peaceful” impacted her, she said. “His message was: You have to be able to trust people, you can’t let anger hinder you from living your best life.” 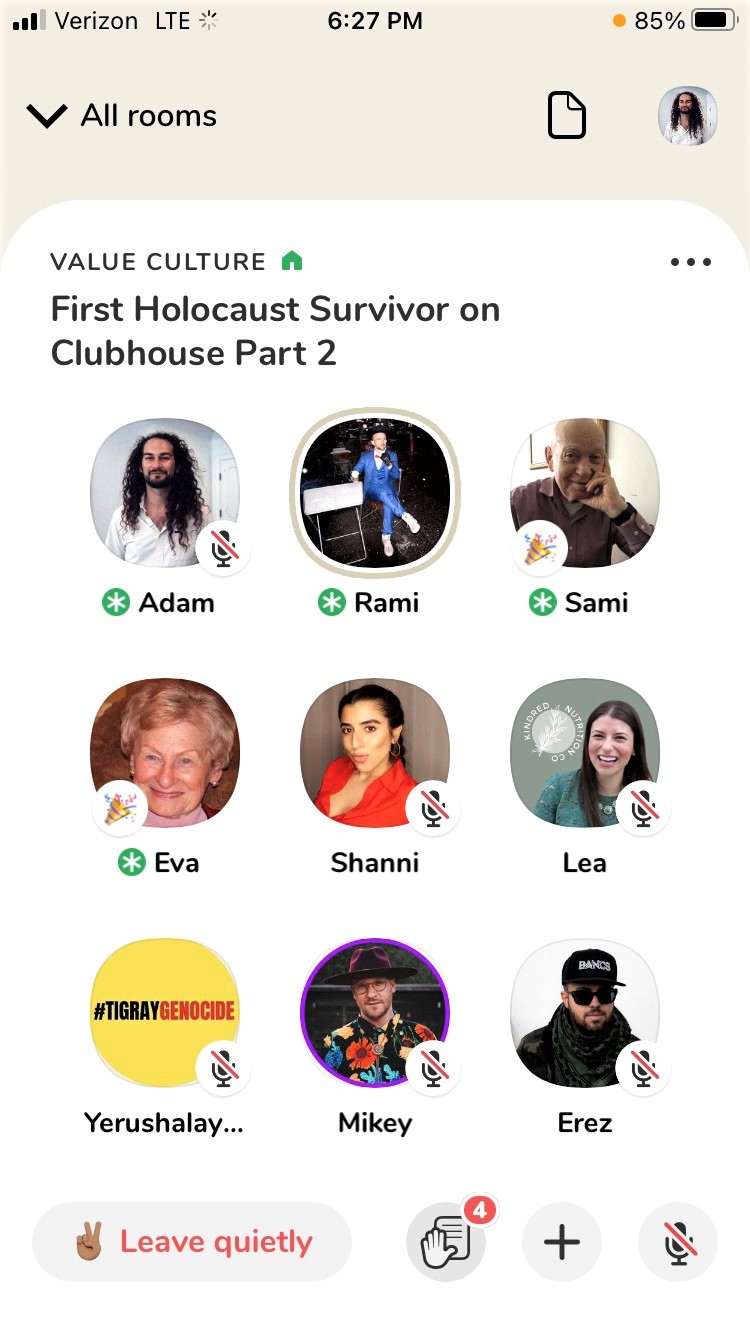 Holocaust survivor Sami Steigmann and others on Clubhouse.

Key noted that the last time she heard a Holocaust survivor speak was about 25 years ago when author Elie Wiesel appeared on “The Oprah Winfrey Show.” She analogized the effort to bring Steigmann and other Holocaust survivors to Clubhouse to a WPA program to interview African-Americans who were living survivors of slavery.

“For Holocaust deniers, their capacity for denial is ingrained, so I’m not sure how effective it is in reaching them,” said Key. “But what the Holocaust survivors share on Clubhouse is important for people like me to hear. It makes me feel I must commit to whatever I have to—to make sure no one has to walk that road again.”

In the Passover event, Steigmann pointed out that Jews need to stand up for their own even as they stand with others.

“Jewish people are fighting for other people, that is wonderful, but when are we going to fight for ourselves?” said Steigmann. “I would like to see when minorities whom we help also help us fight anti-Semitism. It is here, and it is worldwide.”