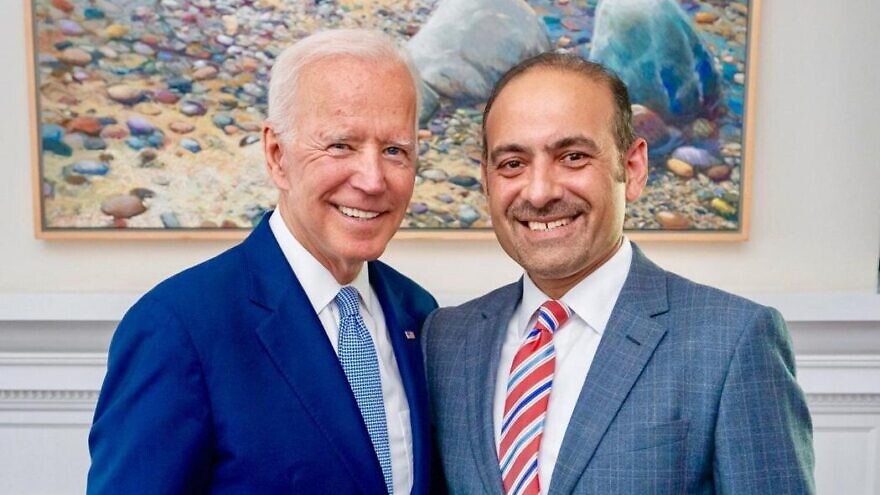 A Biden administration nominee for deputy administrator of the Small Business Administration (SBA) has become the focus of controversy as U.S. senators and Jewish groups fight over whether his membership in an organization critical of Israel should play a factor in his nomination.

The senators expressed concern over Syed’s position on the board of Emgage Action, a Muslim-American political action organization, in light of its recent anti-Israel statements and organizational position towards Israel.

According to the letter, Syed, a Pakistani-American businessman who holds degrees from the University of Texas at Austin and the University of Pennsylvania, has been a member of the group’s board since 2017, which he disclosed during his confirmation hearing on April 21. The Republican senators said that they grew concerned after seeing the group’s statements during the latest conflict between Israel and Hamas in the Gaza Strip.

“Since its occupation of East Jerusalem and the West Bank in 1967, Israel has pursued a systematic campaign to displace and replace Arabs with Jewish settlers in violation of international law,” the statement read. “This has been accompanied by well-documented discriminatory practices that forbid housing construction by Arabs, especially in Jerusalem, in addition to mass-scale home demolitions.”

The senators’ letter cited Emgage Action’s support of accusations that Israel is an apartheid state and being supportive of Rep. Ilhan Omar (D-Minn.) last month when she compared Israel and the United States to Hamas and the Taliban.

“Emgage’s history of supporting the Boycott, Divestment and Sanctions (BDS) movement, combined with its overtly anti-Israel positions and rhetoric, necessitates an additional hearing to ensure Mr. Syed’s confirmation to be the second-most-powerful individual at the SBA would not jeopardize small businesses with close ties to Israeli companies or small businesses owned by Jewish Americans,” the senators wrote. “If an individual who supports these accusations was to be confirmed, it would hinder the close cooperation businesses in America and Israel have in areas such as, cybersecurity, artificial intelligence, medicine, bio-medicine and more.”

‘It is unconstitutional, and it must stop’

The American Jewish Committee defended Syed against the attacks in a news release on Wednesday, calling accusations “un-American.”

The release said that Syed has been an active partner with the San Francisco Jewish community and took part in a program for the national Muslim-Jewish Advisory Council, which the AJC co-convened.

He had also traveled to Israel with the Jewish Community Relations Council of San Francisco and had been involved in other Jewish-Muslim dialogue efforts.

“The unsupported accusation that somehow Jewish businesses or those with ties to Israel may not fare as well under Syed’s leadership in the [SBA] has no factual grounding,” AJC’s release stated. “Indeed, he has specifically disavowed support for the [BDS] movement, which seeks the dissolution of Israel.”

AJC cited Syed answering a question about BDS during his nomination hearing.

“Let me unequivocally state that I do not support BDS. Throughout my career, I have supported engagement with Israeli business. I have personally conducted business with Israeli companies and have mentored entrepreneurs based in Israel,” Syed told the committee.

Other Jewish supporters that are coming to his defense include Rabbi Jack Moline, executive director of Interfaith Alliance and Bend the Arc: Jewish Action.

Moline penned an op-ed in The Times of Israel arguing that the questioning of Syed’s affiliations amounts to a religious test for a public office forbidden under Article VI of the U.S. Constitution.

“The continued attempt to hold Muslim Americans to a different standard simply because of their faith is anti-Muslim bigotry,” Moline wrote. “It is unconstitutional, and it must stop.”

Moline also questioned why Syed’s foreign-policy affiliations are being a greater factor in his confirmation than his business credentials.

Meanwhile, the Zionist Organization of America (ZOA) and the Endowment for Middle East Truth (EMET) are adamant that Syed’s place on the board of the group for the past four years is indicative that his sympathies align with the most controversial stances of the group.

“Syed’s activist support and leadership of a virulent Israel-hating group like Emgage should never be given the power and credibility he would receive if confirmed to a top position at SBA,” said ZOA national president Mort Klein. “More importantly, such a confirmation would … further mainstream and legitimize anti-Semitism, which has recently grown dramatically. This confirmation is a danger to American Jews by further legitimizing and emboldening Jew-haters.”

Klein said that he would like to hear Syed condemn Emgage and that his board membership was a mistake.

Klein and Sarah Stern, founder and president of EMET, which advised Risch’s office on the letter, both said that it was not a question of Syed’s Muslim faith that is at issue but the positions he supports through his activism in Emgage.

Stern pointed out that Emgage publicly supports House Bill 2590, which she said uses biased sources to justify withholding aid to Israel from the United States based on false accusations.

Stern said that it didn’t matter what Syed’s religion was in this situation, as some have called those against his nomination “Islamophobic,” but that the statements Emgage has made and positions it espouses are “inimical to the survival of the State of Israel.”