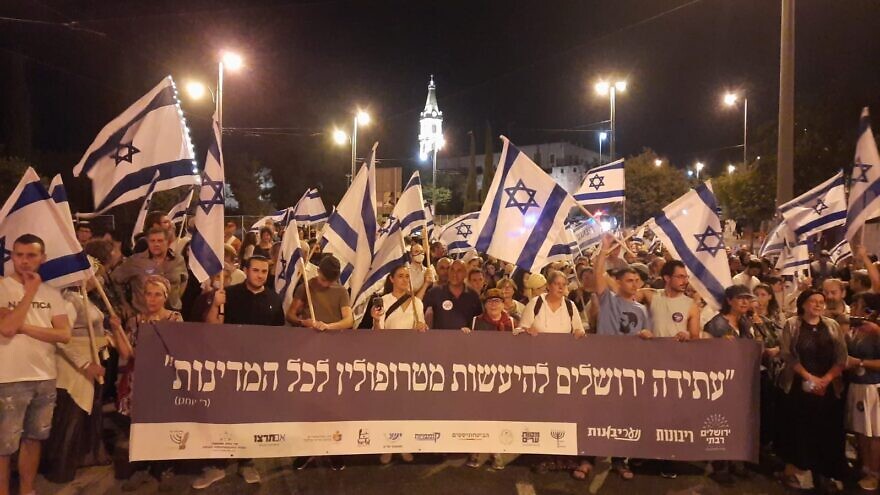 Hundreds of participants took part in the 27th annual Tisha B’Av walk around Jerusalem’s Old City on Saturday night to commemorate the destruction of the two Jewish Holy Temples, as well as to demonstrate Israeli sovereignty over Jerusalem.

The annual walk is organized by the Sovereignty Movement, co-chaired by Yehudit Katsover and Nadia Matar. This year, the walk was held under the motto of “Greater Jerusalem,” with the organizers calling to annex the Jerusalem metropolitan area to the city’s administrative jurisdiction as a first step in the application of Israeli sovereignty.

Katsover and Matar told JNS, “This year, the annual walk has been more important than any in the last 26 years. The talk of returning the American consulate on Agron Street or freezing construction in Jerusalem due to American pressure is once again provoking talk of dividing Jerusalem. Therefore, we must concentrate our efforts on strengthening the position of our united Jerusalem, the exclusive capital of the Jewish people.”

The concept of a united Jerusalem is not new.

And former Israeli Prime Minister Yitzhak Rabin repeated this in 1995 when he said, “Jerusalem is not a bargaining chip. United Jerusalem always was and always will be the capital of the Jewish people under Israeli sovereignty.”

Katsover and Matar explained that the campaign for a Greater Jerusalem calls for turning Jerusalem into a metropolis, which will include the Jewish communities around it such as Ma’ale Adumim, Gush Etzion and Beitar, “thus ensuring that there will always be an overwhelming Jewish majority in our united and eternal capital.”

The participants waved Israeli flags and walked in the usual route that was approved by the police, around the gates of the Old City, among which were the Nablus Gate and the Lions Gate. Members of the opposition and the coalition spoke in the area of Lions Gate.

Member of Knesset Yomtov Kalfon of the Yamina Party spoke about the value of unity—that it is important for us to “preserve it and implement it, especially on this day.”

Member of Knesset Orit Struk of Religious Zionism warned against dividing the city, and the danger of the American administration’s recognition of the Palestinians’ right to the capital and a state. She added that she would “mobilize all means” to promote the Greater Jerusalem Plan.

Matan Peleg, chairman of the movement Im Tirtzu who participated in the event, said “this is an extremely important event for this day. Waving the flags around the Old City connects to the phrase, ‘Renew our days, as of old,’ as well as to Jewish nationalism in the land of Israel, especially now when we want to remind the decision-makers of what is most important to us.”

Also attending the event was Amir Avivi, director of Habithonistim (“The Security Experts”), who said, “On the day when we commemorate the destruction of the [First and Second] Temples, when there are challenges to our sovereignty in Jerusalem, this is the opportunity, especially by waving Israeli flags in our capital, to preserve the tradition of walking around the Old City. Kudos to everyone who came to fulfill this important national task!”

Katsover and Matar concluded by noting that “the entire world has its eyes on Jerusalem and many want to harm our Jewish sovereignty over it. But if there is one thing that unites the Jewish people more than anything, it is Jerusalem. We will not let anyone harm our hold on it.”