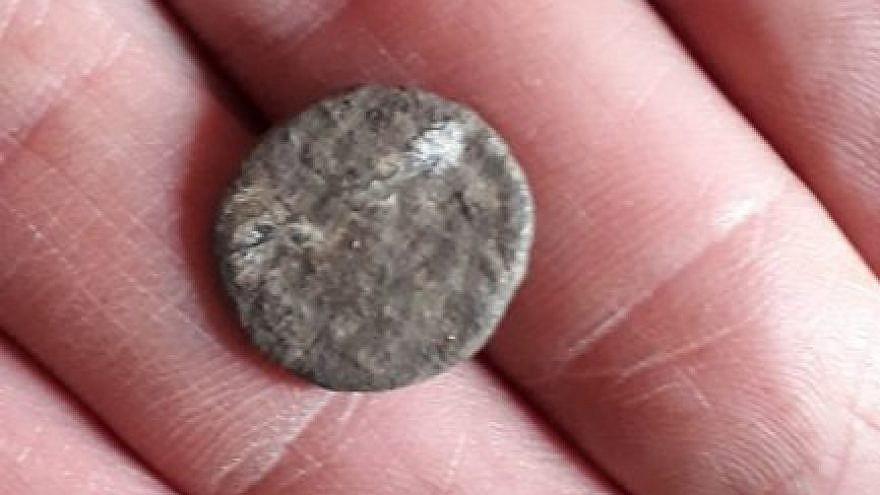 Students from schools in the Lev Hasharon Regional Council helping on an archaeological dig on the Sharon plain have unearthed an ancient coin dating back to the year 300 C.E., among other finds.

Most of the finds at the Kilodia site near Moshav Kfar Yavetz, east of Netanya, date to the early Muslim period (700-1050 C.E.). They include glazed bowls, wine jugs, decorative bronze weights, a bronze bell and semiprecious stones. The coin predates all these discoveries by several centuries.

The excavation is a joint project with Ariel University, and is being overseen by archaeologist Ahiya Cohen-Tabor. Researchers believe that Kilodia was populated in the Byzantine period, based on the discovery of a wine press with a mosaic floor typical of that era.

The students are helping with the excavation as part of the local council’s Karev program, which is designed to interest young students in history and which spearheaded the first excavation at the Kilodia site. Relics were unearthed in the very first dig.

Cohen-Tabor said, “What’s nice here is that local children are coming to investigate a site very close to their homes, and are discovering and getting to know the children who lived in the same place 1,000 years ago.

“The great thing about this project, other than the archaeological aspect, is that it’s mainly educational,” she continued. “One of the students said that if he had something like this in his backyard, he wouldn’t touch his phone. For me, that’s the most important thing.”