Home News Israel Summertime Blues and Whites: In an era of BDS, kids connect to... 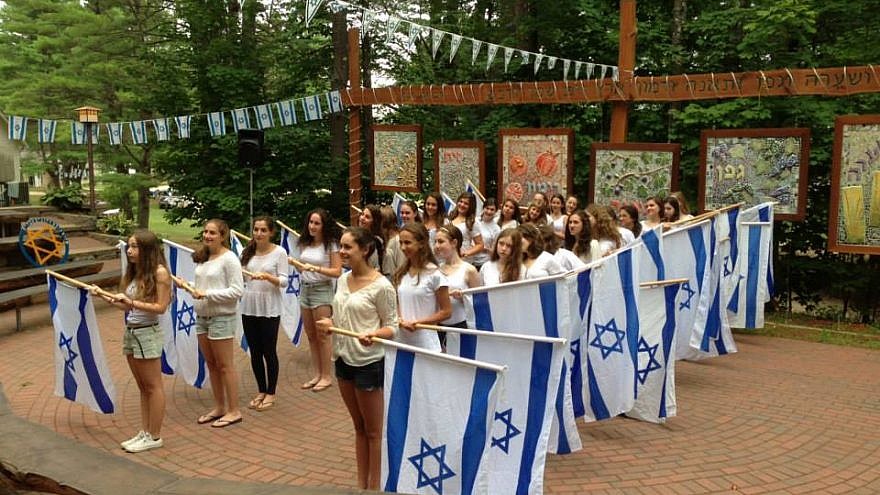 Aviva Weinstein fell in love with Israel thousands of miles from the Jewish homeland at Camp Ramah in the Poconos.

Weinstein is among the generations of North American Jewish teens who have forged lifelong attachments to the Jewish state in the intimate petri dish of an overnight Jewish camp environment, where friendships, values and Jewish peoplehood are born and raised.

This inspiration and connection come at a crucial time in American and Jewish history as the college campuses these youngsters will soon walk onto become increasingly hostile to Israel, and sometimes, even to Jews. 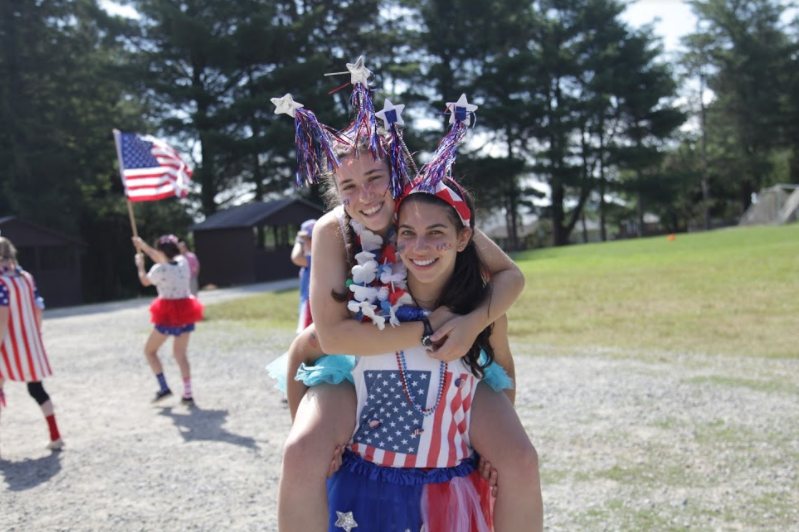 Aviva Weinstein (front) marking the Fourth of July with a friend at summer camp. Credit: Courtesy.

More student governments—joined by some unions and faculty groups—are voting for their schools to stop buying Israeli products or cooperate with Israeli academics and scientists. And roughly half of these 66 campus BDS (Boycott, Divestment and Sanctions) resolutions have passed, according to AMCHA Initiative, a watchdog group that monitors anti-Israel and anti-Semitic activities on North American campuses.

These votes are not isolated incidents. Many schools are seeing an increasing number of professors preaching anti-Israel doctrine—from those whose salaries are paid by deep-pocket funders, including wealthy Arabs, and by others who, as an AMCHA’s Tammi Rossman-Benjamin puts it, “use ‘academic freedom’ as an excuse to push their leftist politics down students’ throats.”

In addition, many schools have chapters of such anti-Israel groups as Students for Justice in Palestine (SJP), as well as Jewish ones like the Jewish Voice for Peace, J Street U and IfNotNow.

And at nearly 50 campuses, these groups hold an annual Israeli Apartheid Week (aka Palestine Awareness or Anti-Zionism Week), exposing countless thousands of students to a litany of Israel’s “crimes.”

Not content to influence the next generation of leaders on campus, last spring the group IfNotNow, which describes itself as “a movement led by young American Jews to end our community’s support for the Israeli occupation,” held training for incoming counselors at Jewish summer camps to ‘enlighten’ their young campers about the “occupation.” 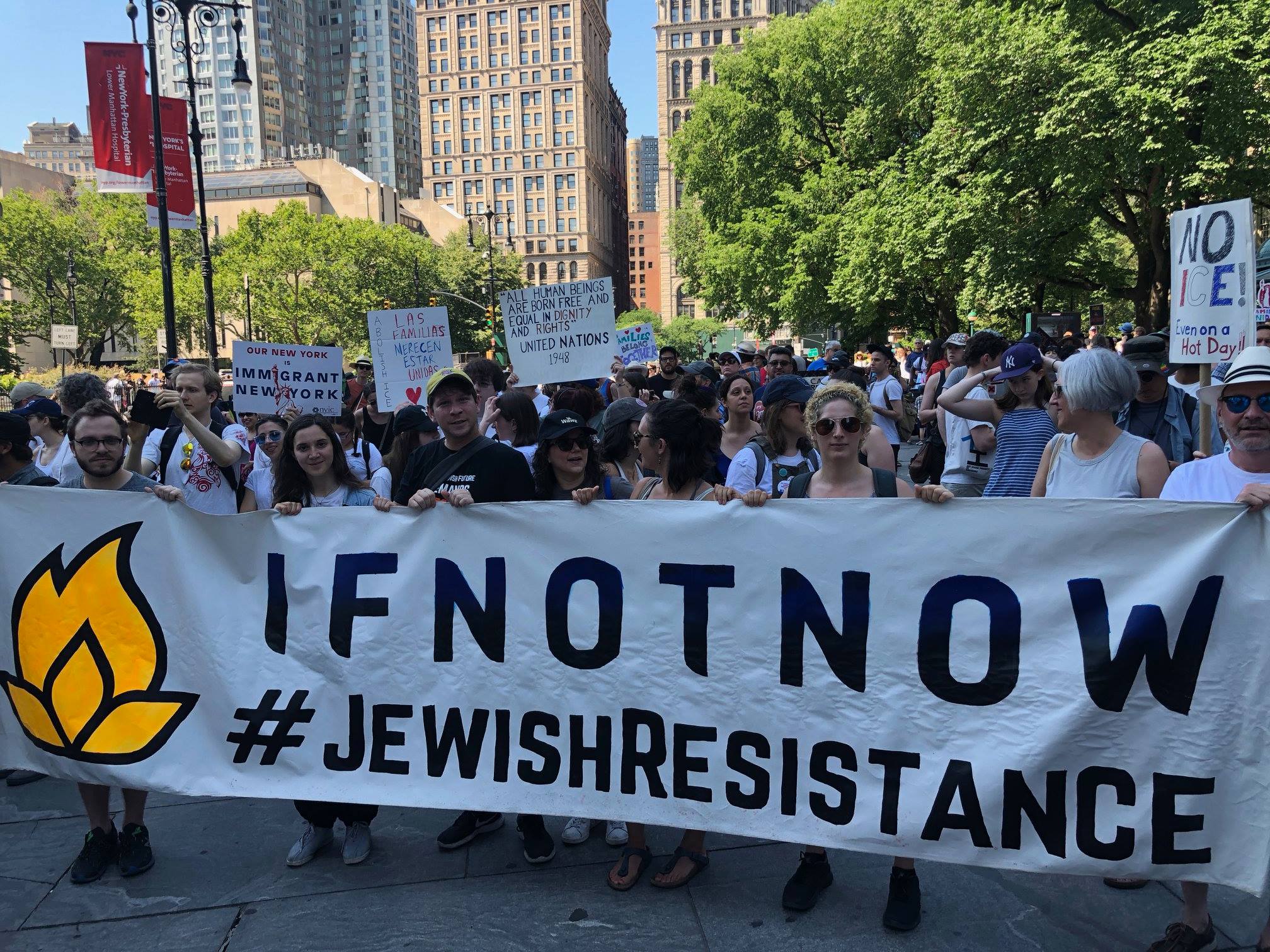 IfNotNow supporters at a rally in New York City. Credit: IfNotNow via Facebook.

This strikes many observers as particularly destructive due to the intimate nature of the camp experience.

“Summer camp, for many American Jews, is an immersive experience—the only time that they can ‘do Jewish’ with other Jews their own age, 24 hours a day, seven days a week,” says Jonathan Sarna, professor of American Jewish History at Brandeis University and author of such award-winning books as American Judaism: A History. “To turn an immersive experience into a divisive one would be a tragedy. Far better for camps to do what they have always done best: offering Jewish youngsters a taste of Utopia.”

CAMERA director Andrea Levin shares Sarna’s concern about the challenges today’s campers are likely to face tomorrow. Her media watchdog has fellows on 40 campuses in North America and the United Kingdom to keep an eye on campus media (including social media) and reach out to Jewish students who say they “increasingly feel marginalized.”

“They need to feel a deep love for Israel, certainly,” she says. “But at the end of the day, it’s only by having strong knowledge about Israel and its history that these kids will be able to defend [the Jewish state]—and themselves—when they get to campus,” says Levin. “Without that, they are sure to be browbeaten in any ‘open discussions’ when critics assert ‘facts’ the Jewish students don’t know enough to refute. Knowledge is their best armor, and camps are important players when it comes to this.”

‘An investment in time and money’

Are camp organizers aware of the environment they’re sending their campers into? “It would be impossible not to think about it,” says Bil Zarch, who runs Camp Yavneh in New Hampshire. From a letter he sent out to parents and supporters last year: “The right of the Jewish people to a homeland in Israel is a core belief at Camp Yavneh … understanding that there is a difference between Jews living in the relative safety of the U.S. and Canada and Jews living in Israel.” 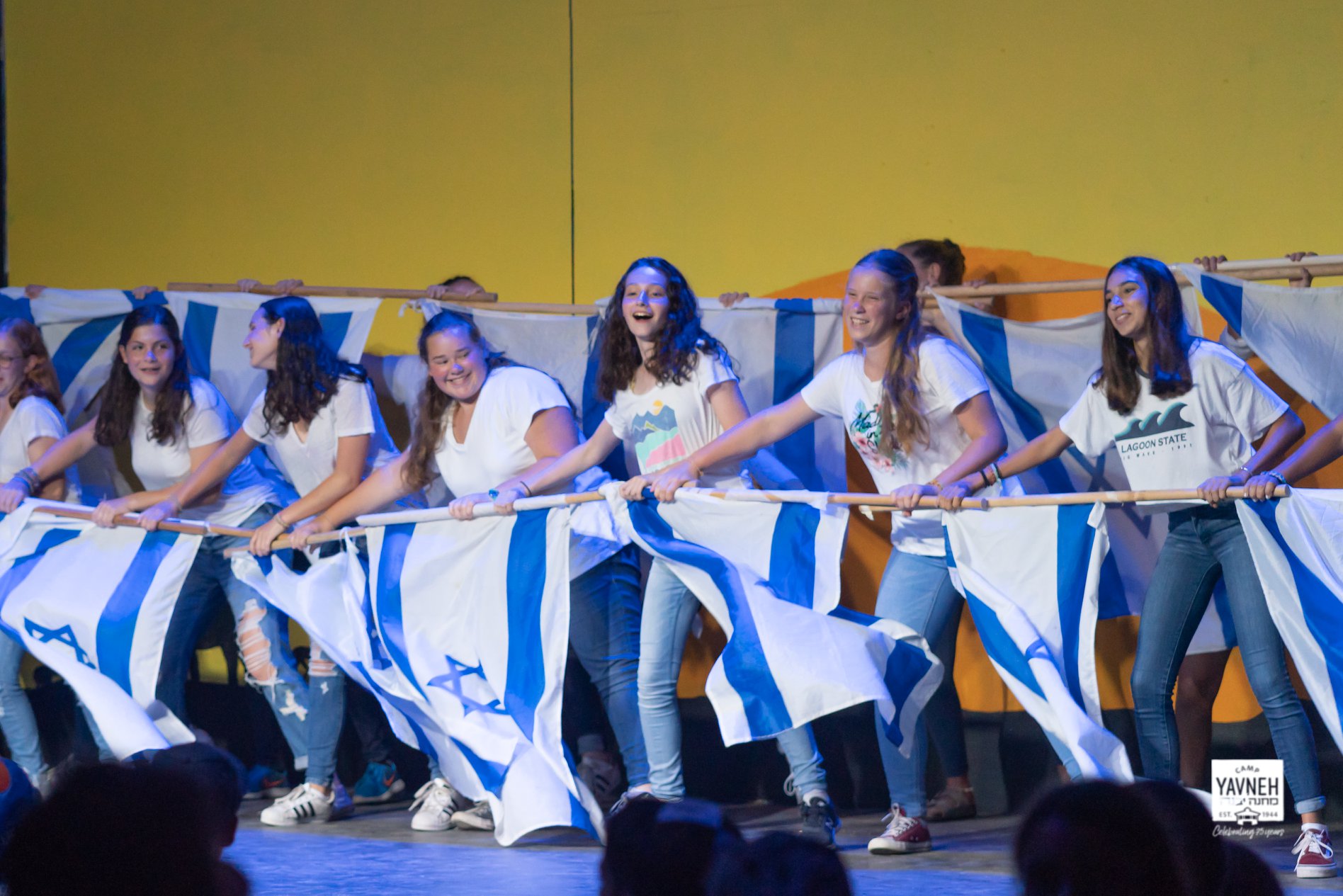 In a similar move, this spring Rabbi Mitchell Cohen, director of the National Ramah Commission of the Jewish Theological Seminary in New York, sent out a strong message on behalf of the Conservative movement’s Ramah camps. “We, the leadership of Ramah, are proud that Zionism is a central part of our core mission, as we nurture within our campers and staff members a deep and enduring love for the State of Israel. At Camp Ramah, campers and staff develop a positive, personal and meaningful connection to Israel.”

Cohen is proud that Ramah flies in some 300 young Israelis to work as counselors and teacher specialists at Ramah’s 10 overnight camps. “It’s an investment in time and money,” he says. “But the return is significant. Our campers and counselors gain Israeli friends from whom they learn so much. The bridges they build are important, especially with attacks from BDS.”

So when three of the IfNotNow trainees landed as counselors last year at Ramah camps, open discussions ensued, and the counselors were informed that no anti-Israel propaganda would be tolerated. “They’re wonderful, passionate young adults, but we needed them to know that this kind of thing is outside the scope of Ramah,” says Cohen. “They weren’t necessarily happy with the decision, but they were respectful.”

It was a learning opportunity for the camps as well, he adds: “Our directors and division heads have to have their antennae up.”

‘The kitchen table for discussing everything that matters’

At the Union of Reform Judaism (URJ), Rabbi Reuven Greenvald, who as director of Israel engagement works with the 18 URJ camps and their 10,000 campers, also met last year with counselors trained by IfNotNow. “As far as we know, no troubles arose, but we let them know that if they want to work in one of our camps, they have to work within our framework.” Also on site is a cadre of young Israeli shluchim”—staff who “make organic connections with both our campers and college-age counselors,” said the rabbi. 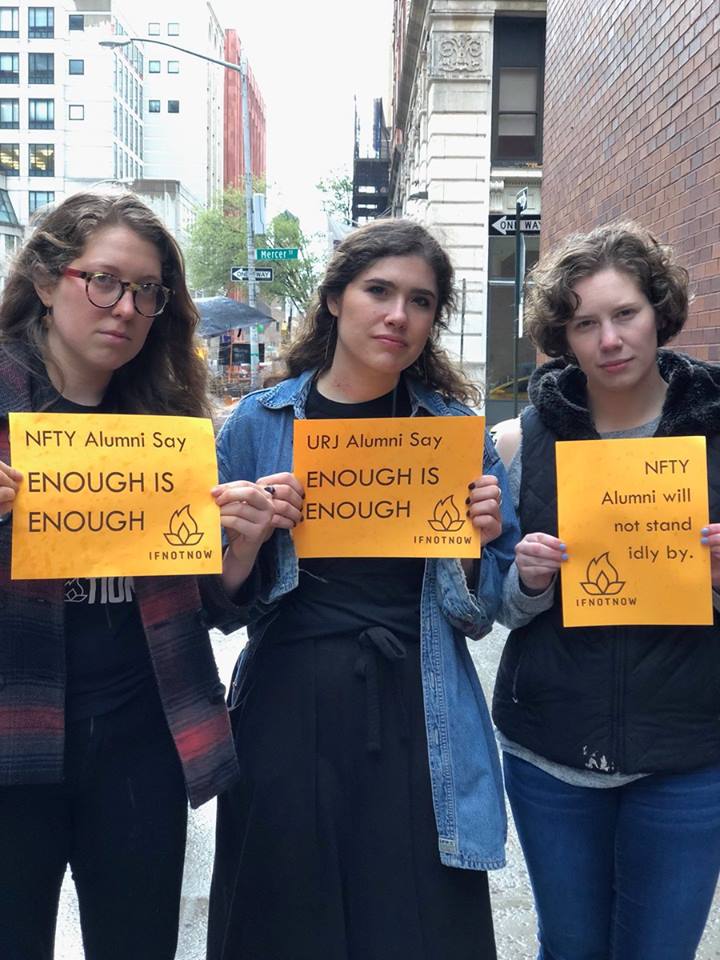 Unlike URJ and Ramah camps, the 25 Jewish Community Center camps (the largest such network in the United States) operate independently. But they do share many basic values, says David Ackerman, senior vice-president of the JCC Association of North America. Among them: “We believe that a strong connection with Israel is one the big ideas in Jewish life that connects us to our past and to Jews around the world today,” he says. “And the more knowledgeable about Israel they are, the more enduring their connection to strengthen them for what they’ll encounter, whether it’s in the media or their college cafeteria.”

And though he says he hasn’t heard any anti-Israel rumblings from the camps, “we do know that camps are the kitchen table for openly discussing everything that matters. That’s the magic—and the opportunity.”

At TheZone, a keruv (outreach) camp in the Catskills that attracts youngsters from across the Jewish spectrum, “the goal is to foster a strong Jewish identity and community and Israel is a big part of that,” says Meira Zisowitz, director of the girls’ camp that hosts 500 each summer (TheZone boys camp has about an equal number of campers) and where one-quarter of the counselors are Israeli. “We create an excitement about Israel, about going there someday,” she adds. “And many of them do. You never know the effect you have on kids until much later.”

An attachment to Israel is such a foundational part of Bnei Akiva camps that “even before they walk in they know we’re religious Zionists, so there will be a strong Israel focus. That’s one reason families send their children to us.”

So says Rabbi Shaul Feldman, executive director for Bnei Avika’s five North American overnight (and two day) camps and a former Israel Defense Forces paratrooper. “They leave not only more knowledgeable but also connected,” he adds. “I say, ‘Good luck to anyone who tries to tell them Israel has no right to exist.’ ”

‘One unwavering voice for Israel’

Former camper Marissa Sandler, whose love of Israel was first ignited 15 years ago at Camp Young Judaea Texas, reports that “I actually attribute a lot of my adult life to that camp.”

Not only did she meet her future husband, Yosi, there when they served as counselors, she says “that’s also where I fell in love with Israel.”

It proved a love so powerful that in 2010, she made aliyah and is now the mother of two young Israelis.

“We create a space where it feels good to be Jewish and love Israel,” says Young Judea Texas director Frank Silberlicht. “There’s a reason singing ‘Hatikvah’ is the last thing we do each night.”

The folks at the umbrella organization Foundation for Jewish Camp (FJC) are also keeping their eye on Israel’s role in summer camps. It’s a topic that comes up often during Cornerstone Fellowship, a leadership-training program for senior counselors. “Israel education, as part of the overall mission, is a central to the work of Jewish camps,” says CEO Jeremy Fingerman. “We encourage camps to provide developmentally appropriate, relevant and engaging material to our campers, staff and families.”

That issue of Israel programming that’s developmentally appropriate resonates with Josh Bar-on (Brown), a longtime camper and counselor at Yavneh who has since led teen groups around Israel. “You can’t give a so-called ‘balanced view of the conflict’ to young kids; they’re not ready for complex political explanations,” says Bar-on, who now lives with his family in Efrat. “All they really need is to bond with the Jewish homeland. There’s plenty of time for politics when they’re older and already have that connection.”

Bar-on says he’s “thankful that what I heard at camp was one unwavering voice for Israel—that being Jewish meant being strong, having a history and a state. For that alone, I owe Camp Yavneh an enormous debt.”

One particular memory: The night in 2001 when the Second Intifada was just beginning and parents were balking at sending their teens on Yavneh’s summer Israel trip. “I’ll never forget director, Debbie Sussman, telling the parents that this is exactly the time we need to show our support of Israel. In the end, nearly all of us went.”

Ramah’s Rabbi Cohen put it this way. “If they know why Israel is so important to our people, when they’re old enough to understand things within the context of Israel’s role in Jewish history and destiny, then they’ll engage in dialogue about the complexities facing Israel today.”

He offers this advice to parents: “Tell your kids to befriend the Israelis at camp and hear their stories, how they defended our people in the army. The more personal their connection to Israel, the greater sense that Israel belongs to them, too.”