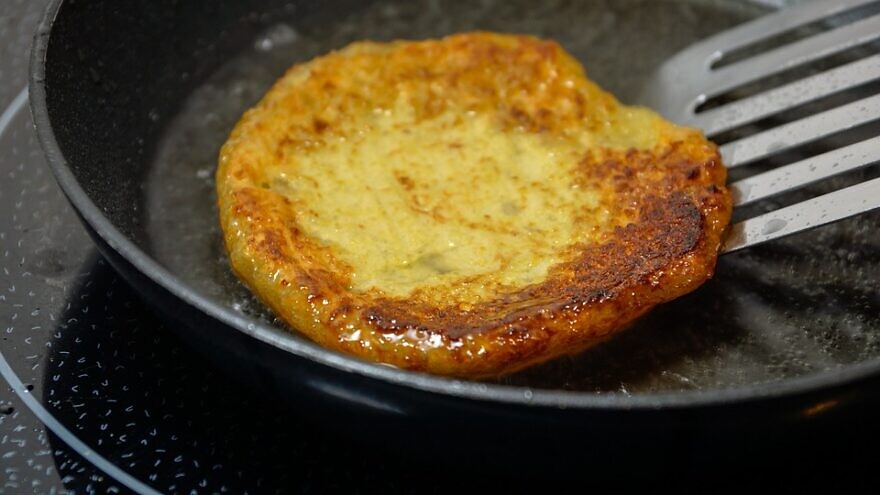 Paula Shoyer’s Instant Pot Kosher Cookbook was a near-instant success. It offers 46 kosher-for-Passover recipes that can be used for other holidays as well, from soups and salads to appetizers, sides to main courses and desserts—a number of which are vegetarian, vegan and gluten-free—this is the time to pull out that Instant Pot you received as a gift and were afraid to use.

The latke recipe is just right for Hanukkah with the applesauce offering that last wisp of fall. The wings are a warm accompaniment, topped off by more fall flavor with the pumpkin doughnuts, a nod to oil-reminiscent foods for the holiday. Both come from Shoyer’s prior collections.

Put them together, with a favorite salad on the side, to create a tapas-oriented lighter meal.

Everyone loves potato latkes but no one likes the mess of frying them or the guilt associated with eating them. These latkes are baked in the oven and easily won over my kids. You do need to watch them so they do not burn; they were done at different times in different ovens.

The Pickled Applesauce is a tangy accompaniment.

2 tablespoons sunflower or safflower oil, or more if needed

When the oven is hot, pour 2 tablespoons of oil onto 2 jelly-roll pans and turn them in every direction so that the oil coats the pans. Heat the pans in the oven for 5 minutes.

Place the onions and scallions in the bowl of a food processor and chop them into small pieces. Place them in a medium bowl.

Shred the potatoes by hand on the large holes of a box grater or in a food processor with the shredding blade and place in the bowl. Add the lemon juice, eggs, baking powder, potato starch, salt and pepper; mix well.

Very carefully (I mean, really carefully; move very slowly) remove one of the pans and use your hands or a spoon to scoop up and drop clumps of the potato mixture, a little less than ¼ cup, onto the pan. I use my hands. Press the mixture down to flatten it a little.

Place the pan in the oven for 10 to 12 minutes, and immediately remove the second oiled pan.

Repeat the same process with the remaining potato mixture and bake the second pan of latkes for 10 to 12 minutes. Bake them until the edges are well browned, and then with a slotted spatula turn them over and cook the latkes for another 8 to 10 minutes, or until the bottoms are browned.

May be made 2 days in advance and reheated in the oven.

To make the applesauce: Heat the oil in a small saucepan over medium heat. Add the onions and cook them for 3 minutes, until they soften. Add the vinegar and brown sugar, and cook for another 3 minutes. Add the apples, coriander, ginger, cinnamon stick, salt and pepper, and cook, covered, on low heat for 15 minutes, or until the apples are soft. Let the mixture cool for 10 minutes and then purée it, using an immersion blender or a food processor. May be made 4 days in advance, and served warm or cold. 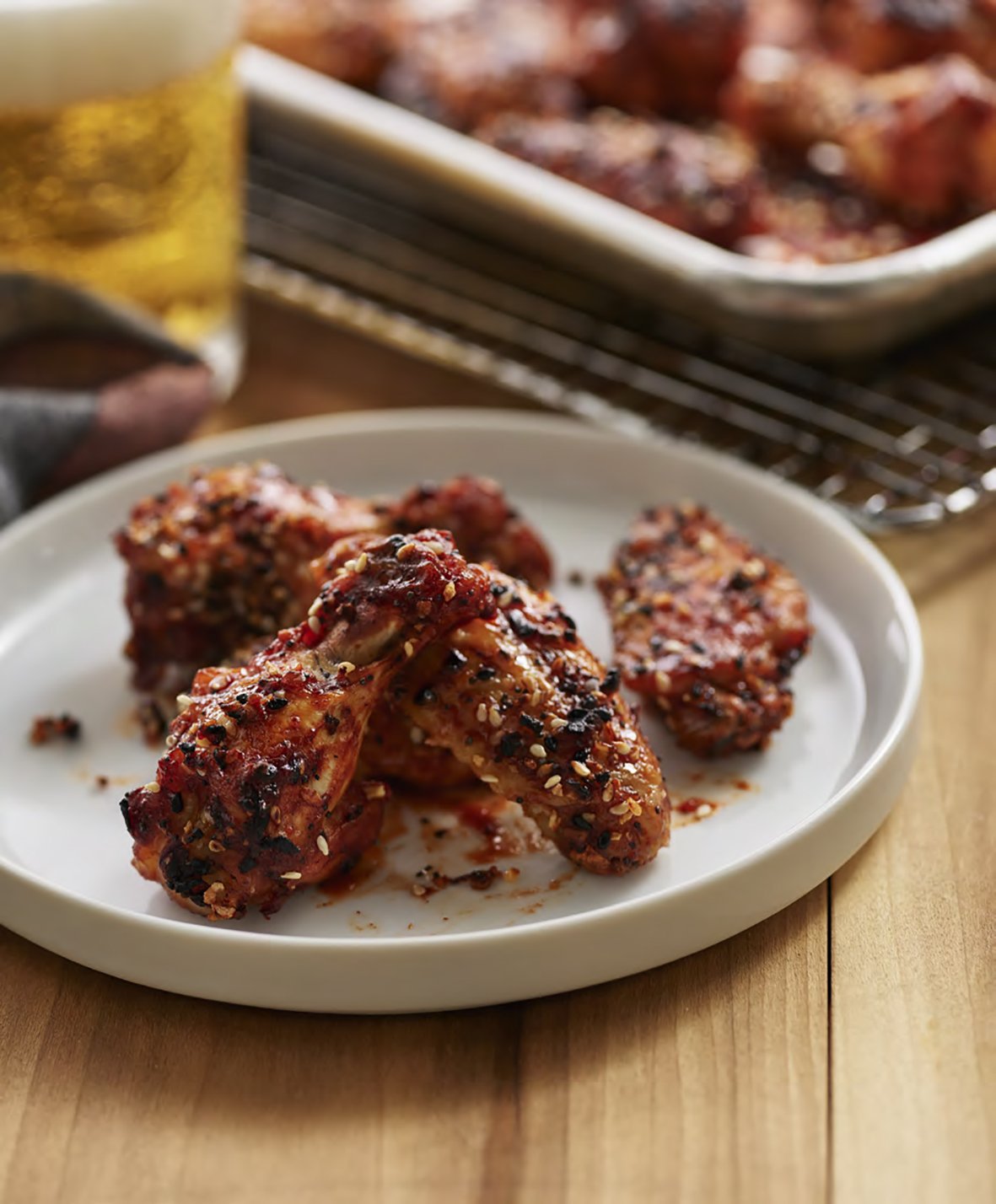 Years ago, I tested recipes for two of Susie Fishbein’s cookbooks and learned that the best way to make chicken wings was to boil them first and then bake them. The instant pot recipe makes the process faster.

Button to use: Pressure Cook

Advance prep: May be made two days in advance

3 to 3½ tablespoons Everything Bagel spice, divided

Place the water into the inner pot and add the steam rack. Pile the wings on top.

Secure the lid, ensuring that the steam release handle is in the Sealing position. Press the Pressure Cook button and set the cooking time for 5 minutes.

When the cooking time is complete, turn the steam release handle to the Venting position to quickly release the pressure. Preheat the oven to broil. Press Cancel and open the lid.

Remove the wings to a baking pan.

Pour the barbecue sauce and pepper on top and toss to coat. Sprinkle half of the Everything Bagel spice on top.

Place the pan into the oven on a rack in the top third of the oven, but not on the oven rack closest to the heat. Broil for 5 minutes.

Turn the wings over, and add the remaining Everything Bagel spice and broil for another 5 minutes, or longer until desired browning. 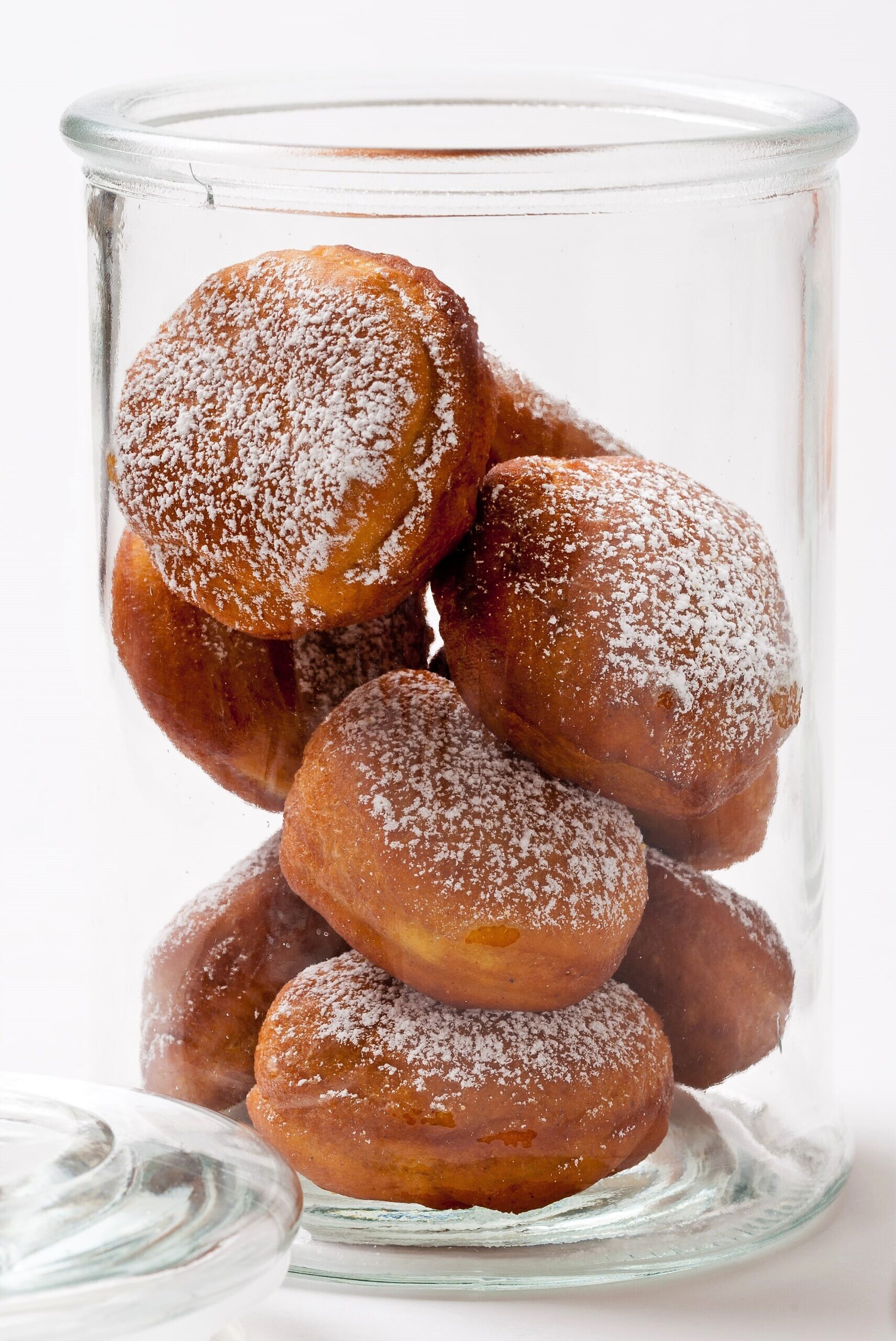 With Thanksgiving just days before the start of Hanukkah this year, it’s the perfect flavor for a holiday treat.

2 tablespoons margarine, at room temperature for at least 15 minutes

3 to 3 ¼ cups all-purpose flour, plus extra for dusting

In a large bowl, place the yeast, warm water, and one teaspoon of sugar and stir. Let the mixture sit for 10 minutes, or until thick.

Add the remaining sugar, brown sugar, soy milk, margarine, egg, pumpkin purée, salt, cinnamon, nutmeg, vanilla and 2 cups of flour to the bowl, and mix on low speed with either a dough hook in a stand mixer or a wooden spoon.

Add another cup of flour and mix well.

Add more flour, a tablespoon at a time, and mix it in until the dough becomes smooth but not sticky, scraping down the sides of the bowl each time before you add more flour.

Cover the dough with a clean dishtowel and let it rise for one hour in a warm place. I use a warming drawer on a low setting, or you can turn your oven on to its lowest setting, place the bowl in the oven and then turn off the oven.

Punch down the dough by folding it over a few times and reshaping it into a ball. Then recover the dough and let it rise for 10 minutes.

Dust a cookie sheet with some flour. Sprinkle some flour on your counter or a piece of parchment paper and roll the dough out until it’s about ½-inch thick. Use a 2½-inch round cookie-cutter or drinking glass to cut out circles and place them on the prepared cookie sheet. Re-roll any scraps. Cover the doughnuts with the towel. Place the cookie sheet back in the oven (warm but turned off) or warming drawer. Let the doughnuts rise for 45 minutes.

Heat 1½ inches of oil in a medium saucepan for a few minutes and use a candy thermometer to see when the temperature stays between 365 and 375 degrees; adjust the flame until the oil stays in that temperature range.

Cover a cookie sheet with foil. Place a wire rack on top of it and set it near your stovetop.

Gently slide the doughnuts, no more than 4 to 5 at a time, top-side down, into the oil and fry for 1½ minutes. Turn the doughnuts over and cook another 1½ minutes. Remove them with a slotted spoon, letting any excess oil drip off, and place on the wire rack to cool.

Repeat for the remaining doughnuts. Dust with the confectioners’ sugar and serve.

Store covered at room temperature for up to 1 day and reheat to serve.