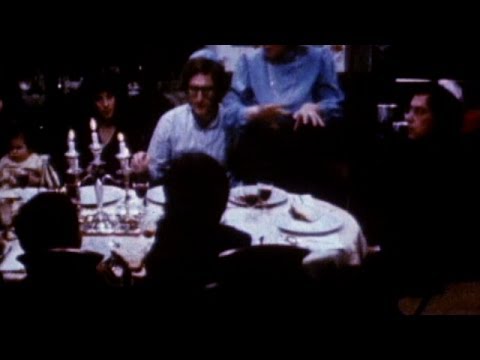 A Generation Apart, a 1983 Holocaust documentary streaming on paid Amazon Prime, explores the impact of the Holocaust on the families of the survivors.

You may wonder why I have chosen this film for this week’s review. Well to answer that question is frankly what A Generation Apart is all about.

Like the participants in the film, I am also seeking answers about the past of both my survivor parents (of blessed memory). Neither of them spoke to my sister or me about any of their war experiences. Each had a very different Holocaust experience.

Mom (Eva Friedman) a survivor of Auschwitz (she was only 15 when she was deported in May 1944), was also transferred to Germany’s Ravensbruck concentration in 1945. She was forced into slave labor at the Siemens plant adjected to the Ravensbruck camp. Mom was liberated in May 1945 by the Russian Army. After going back to Kosice, Czechoslovakia, she decided Kosice was not a place for her, so she made her way to Palestine on the ship Exodus 1947. A horrid trip through Cyprus to Palestine nearly took a year. Mom arrived in 1947 and stayed with her cousins who had immigrated to Palestine after the war. Mom quickly was able to support herself as she was a trained beautician. Eventually, she opened a very successful Beauty Salon in Tel Aviv. Mom was a remarkable woman with amazing mental acumen and determined entrepreneurship abilities. I once told mom that she could “sell a freezer to Eskimos”.

Dad  (Rolf Giesener) escaped Berlin in Nazi Germany at the age of only 15. He was placed on the last Hadassah Aliyot Kindertransport out of Berlin by his father Alfred and his mother Katie Giesener in 1935. He escaped Germany right after the Nuremberg Laws were instituted as it quickly became intolerable for Jews in Berlin. Historically Hitler was happy to have Jews leave the country during this time. Shortly after these laws were passed things changed dramatically for the Jews of Germany.

Both my grandparents were educated and feared what was to come of Germany under the Nazi regime. Dad traveled with 100 other teenagers from Italy on the ship The Galilea to the Port of Haifa, Palestine, and arrived in 1935/36. Dad was typically German in demeanor, stoic, exacting with a precise mental outlook. He was incredibly kind and generous. He was a skilled wood craftsman, self-taught, and highly focused. Ever since I can remember Dad was all about improving his life and that of his family. In Palestine, he grew up on the Yagur Kibbutz where he learned to be a master woodworker. He served in the Hagenah constructing wood propellers for planes in the Air Force. He served in the War of Independence in 1948. My parents met on a beach in Tel Aviv, were married in 1950, and were sponsored to come to the Allentown, Pennsylvania in 1954, while mom was pregnant with my sister. I was born there in 1958.

Both my parents came to this country without a penny to their name and not knowing a word of English. Through hard work, pluck, persistence, and dedication to their families plus a consistent and clear focus on their futures they worked extremely hard to educate us,  paying for both our college educations. Eventually, Mom and Dad together were able to purchase a large Beauty Supply wholesale and retail distribution business. They invited me to join their business after I graduated from Temple University. I spent 16 valuable and lovely years working with my parents.

You may be asking why I am telling you all of this when I am supposed to be reviewing a movie.

Well,  to understand my background is in many ways to understand the film A Generation Apart. I needed to share the above and the lens through which I watched this documentary.

The film is a series of montages with the participants speaking to one another in family settings. Fortunately for them, they had the opportunity to listen and discuss firsthand their parents’ war experiences. Not only were they able to discuss their deepest feelings about the Holocaust with their other siblings they also got to dialogue with their parents.

My sister and I didn’t have such an opportunity. Whenever we asked, or to be honest, kind of a non-ask we got the “distinct vibe” from both my parents that they preferred not to discuss their war experiences. For us, their “Holocaust silence” was deafening.

Through these films, other primary online research, and our personal networking, my sister and I are patiently putting our family Shoah historical puzzle together piece by painful piece.

However, in a curious way, A Generation Apart relays to us, those whose parents were reticent to discuss their Holocaust experience, how this frightening silence has affected us. How? Well, that is not easy to answer either but for me, and I can only speak for myself, my parents’ war experiences have led to the strangest of emotions, nightmares, and phases of difficulties throughout my life. But why?  Honestly, I don’t know. And why this topic is such a mind bend. Can there be a right answer?

The energy exposed trying to attain closure finally enables the Survivor mother and daughter to talk at the deepest levels while unmasking years of personal pain for both. On the other hand, this documentary suggests that children of Survivors react to inherited Holocaust trauma in separate but very different ways.

When my sister and I speak to each other we speak in similar ways as do the Survivor children in the film. This is exactly why I would advocate that you watch this film but do so with your generational surviving siblings. Or if you’re lucky enough to have your parents, watch this film with them.

Of course, with each passing year fewer of us have the blessing to have our parents with us. My parents passed in 2011 (mom at 83) and 2012 (dad at 93). Only if only I could have used this film to open a dialogue with my parents! It would have opened new channels of understanding just as it did for both sets of families in the film.

Some advice… use these discussion sessions to open a dialogue Record them with your mobile phone so you can preserve them for your children and their children’s generation…#NEVERAGAIN!