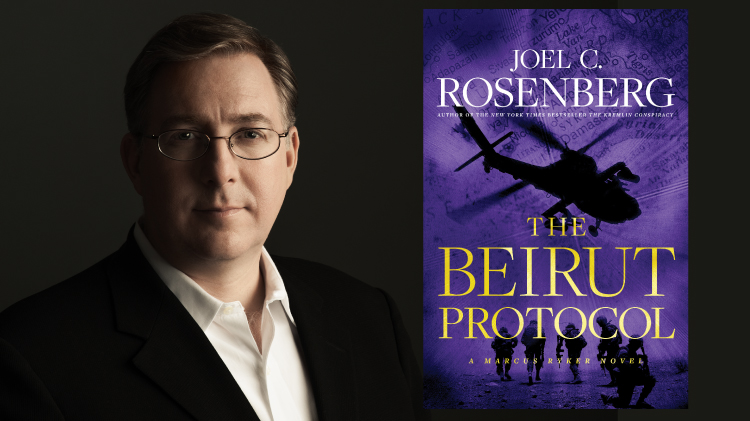 In his fourth appearance in a Joel Rosenberg fictional thriller, CIA Agent Marcus Ryker fights valiantly when he and two others making a peaceful inspection tour of the Israeli-Lebanese border are ambushed and captured by a unit of Hezbollah.  The operatives of the Radwan unit don’t know how big a prize Ryker is, thinking at first that he is an Israeli, and finding out belatedly that he is an American.  But, given that he provides them with his alias, they don’t know his real name of why such countries as Russia and Iran have put a big price on his head.

The two associates who had been accompanying him were a female former police officer now working for the U.S. Diplomatic Security Service, and an English-speaking Israeli escort, whose identity as the nephew of Israel’s Prime Minister must at all costs be kept secret.

And that’s just the beginning of the fast-moving book.  Before it is over, we get a look at how, despite the calculations of Hezbollah leaders in Lebanon, their Shia overlords in Iran, and the Israeli military, a determined group of terrorists can plunge the region into a devastating war.

Some people have called Rosenberg such a close student of Middle Eastern events that he is able to accurately predict the Middle East’s unfolding real-life drama.  When I read an advance copy of the novel in November,  the fictional war between Lebanon and Israel prompted by the abduction of Ryker and friends was thought to be an effort to prevent Saudi Arabia from signing a peace pact with Israel – a peace pact that in the reality of today’s world more and more observers believe is likely.  However, unless Rosenberg rewrites parts of  the book before its release date, he has such Gulf States and Bahrain waiting on Saudi Arabia before deciding whether they too will sign a peace treaty with Israel.  In the real world, of course, the UAE and Bahrain have made peace with Israel before Saudi Arabia has done so.

As we follow Stryker’s efforts to free himself and his colleagues, we also see the world spiraling into chaos as not only players in the Middle East but in the United States try to interpret, and often miscalculate, what is happening on the ground.

Stryker, who is an American-style James Bond, without the polish, doesn’t wait passively to be rescued, even though he is outnumbered and has been severely injured.  You’ll want to keep turning the 455-pages to determine if there ever can be a fifth Marcus Ryker adventure.

The suspense novel, published by Tyndale House Publishing, is scheduled to hit the book stands on March 9, 2021.