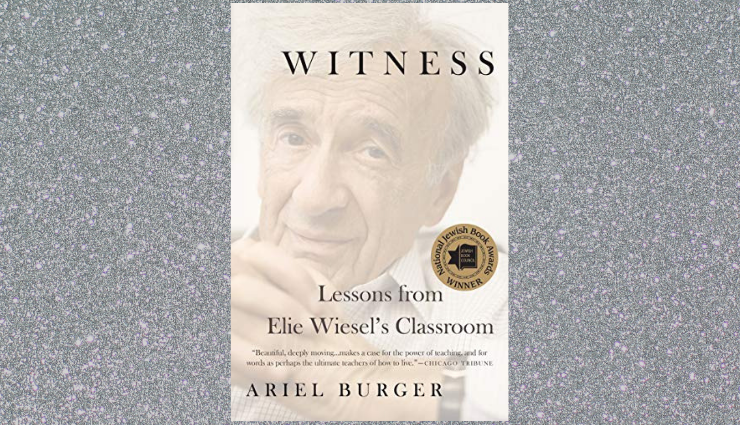 Elie Wiesel (1928 – 2016), Holocaust survivor and Nobel Prize laureate, perhaps best known for his memoir Night, and arguably the most well-known Holocaust spokesman of his generation, was a teacher as well as an author. He taught first at City College of New York beginning in 1972, and in 1976 he moved to Boston University, where he remained for the next thirty-four years.

Witness by Rabbi Ariel Burger comprises autobiographical snapshots intertwined with vivid accounts of Wiesel’s lectures captured from “twenty-five years’ worth of journal entries, five years of classroom notes, and interviews with Elie Wiesel’s students from all over the world.” Being Wiesel’s teaching assistant at Boston University for a number of years places Burger in a unique position to write this book, in which each chapter garners lessons gleaned from Wiesel’s courses.

Wiesel, we discover in Chapter 1, perceived learning to be his key to surviving the concentration camp and Holocaust. Yet, he could not explain the disconnect between humanity’s wisdom and the realities of world in which he lived, only bridging this gap by latching on to an old Hasidic saying, “Forgetfulness leads to exile, memory to redemption.” For Wiesel, “Memory is our only protection. ‘My goal is always the same: to invoke the past as a shield for the future,’” achieving this by unabashedly examining literature through the twin lenses of ethics and morality with the goal of awakening “sensitivity to others’ suffering.”

Looking at the past to enlighten the present, Wiesel, in Chapter 5, asks his class why Cain killed his brother Abel? He responds to his own question by pointing out that just before the murder, Cain and Abel speak to each other (Gen. 3:8). The Hebrew Bible says, “And Cain spoke to Abel,” but the sentence has no content; the conversation is never recorded. Why he asks? Burger, describing the interchange between student and teacher, shows us the importance and worthiness Wiesel places on communication.

In the same chapter, Wiesel, lecturing on the construct called madness, explains there are a number of different kinds of madness—clinical madness, political madness, mystical madness. For him, the twentieth century held two mass movements of madness, Nazism and Communism, both of which were examples of collective insanity fostered by individual madness; namely Hitler and Stalin, both of whom were filled with misconceptions and mistrust.  “One must be mad,” Wiesel said, “to believe that we can make the world better…. It is unreasonable, irrational. But I am for that madness.”

Witness, covering a wide swath of Wiesel’s beliefs, including faith, compassion, conflict, and genocide, is a clear accounting of the high moral and ethical standards through which he lived, along with the thought processes of one of the most important writers and activists of the twentieth century. Witness is a must read for anyone wanting to understand Wiesel’s approach to teaching and learning in addition to the values supporting his writings and activism.