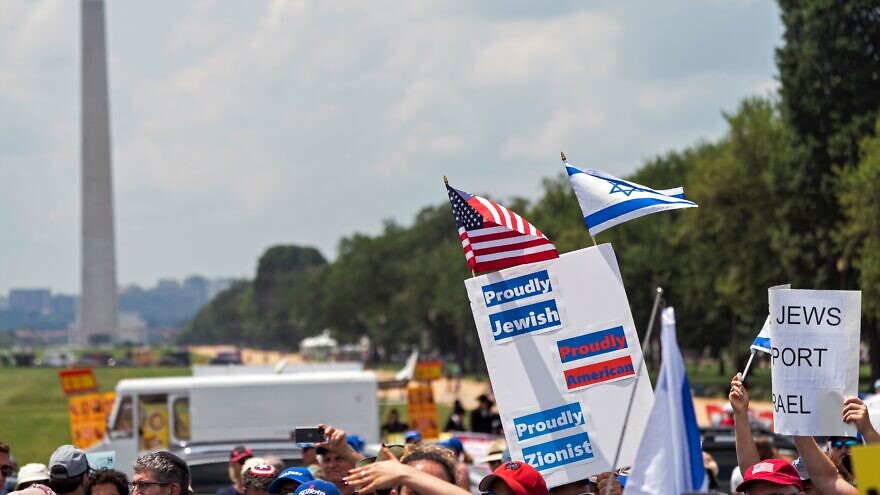 Despite the sweltering heat in the early afternoon at the U.S. Capitol on Sunday, Jews who attended the “No Fear: A Rally in Solidarity With the Jewish People” enthusiastically received the many speakers on the rally stage.

The attendees, frustrated over growing anti-Semitic acts in the United States, felt it was their duty to show up and be heard in close proximity to the epicenter of American democracy.

“A wise man once told me that any civilization that allows anti-Semitism to persist—that is Jew-hatred—is the canary in the mineshaft. Once that happens, once that is not stopped, the civilization collapses,” said Adam Lovinger, an attorney and professor at Georgetown University from Chevy Chase. “So I believe in America. I believe in Western civilization, believe in Israel and believe that we have to stop anti-Semitism, nip it in the bud.”

Lovinger said he felt that the Jewish community was sharply divided by politics and that the enemies of the Jewish people consider it a victory when Jews are divided because history shows that Jewish people become weaker when that happens.

The crowd of thousands, many wearing blue hats with “#NoFear” written on them or carrying signs—homemade or distributed at the event—seemed to separate into three groups on the grassy field. The largest and most enthusiastic was in the center, in front of the stage. It was flanked by two other, less dense groups to the north and south, where trees provided ample shade and some even brought picnic blankets and folding chairs. 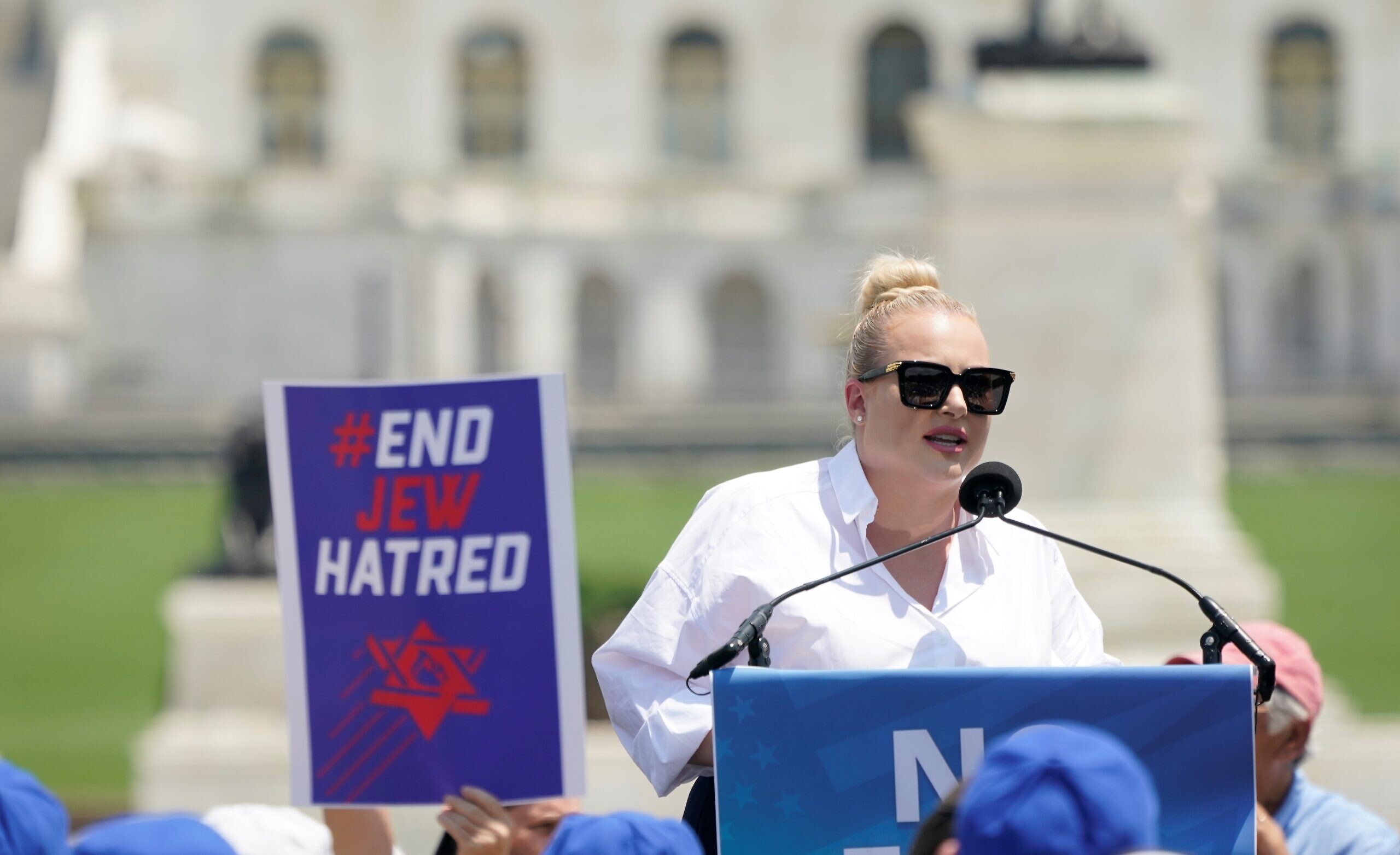 Meghan McCain, columnist, author and television host, makes remarks at the “No Fear: A Rally in Solidarity With the Jewish People” on the National Mall in Washington, D.C., on July 11, 2021. Credit: Chris Kleponis.

One such group comprised Olivia and Benjamin Dolgin, and Steve Schobel and his wife, neighbors from Fredericksburg, Va., seated in a semicircle on camping chairs. Among the older attendees present at the rally, they were angry at what they saw happening in the country.

“Anti-Semitism is out of control. It’s become normalized. It’s everywhere,” said Olivia Dolgin. “It’s in Congress, it’s in the universities, it’s in the school systems. The media is posting lies, distortions and insulting everybody. They are inciting hatred, and they have weaponized anti-Semitism. It cannot be explained, other than pure Jew hate.”

Her husband, Benjamin Dolgin, was expelled from his native Soviet Union because of government-sponsored anti-Semitism.

“Unfortunately, I see the same thing happening now, here in the United States,” he said. “It horrifies me beyond anything. I never expected to ever find myself in a situation where telling anybody that you are Jewish is dangerous. I don’t want to see it ever again, and that’s why I’m here.”

Schobel agreed. He said he was most concerned about right-wing anti-Semitism, which has increased over the past five years and was visible in the white-supremacist “Unite the Right” rally in Charlottesville, Va., in August 2017.

“My wife and I went to the University of Virginia, and we were absolutely shocked and blown away to see the level of hatred that was going on and the support that it was getting from our president, from the GOP, people not speaking out against it. And it just was left to fester for that entire period of time, and it’s grown worse, much worse,” said Schobel.

Despite concerns, the only counter-protesters were the ubiquitous Netruei Karta Chassidim holding signs on the other side of the street from the rally. Walking the sidewalk on the side of the rally, was a lone protester wearing a facemask with a double-sided sign that said “Free Palestine” and “End the occupation now.”

Few attendees paid attention to either. 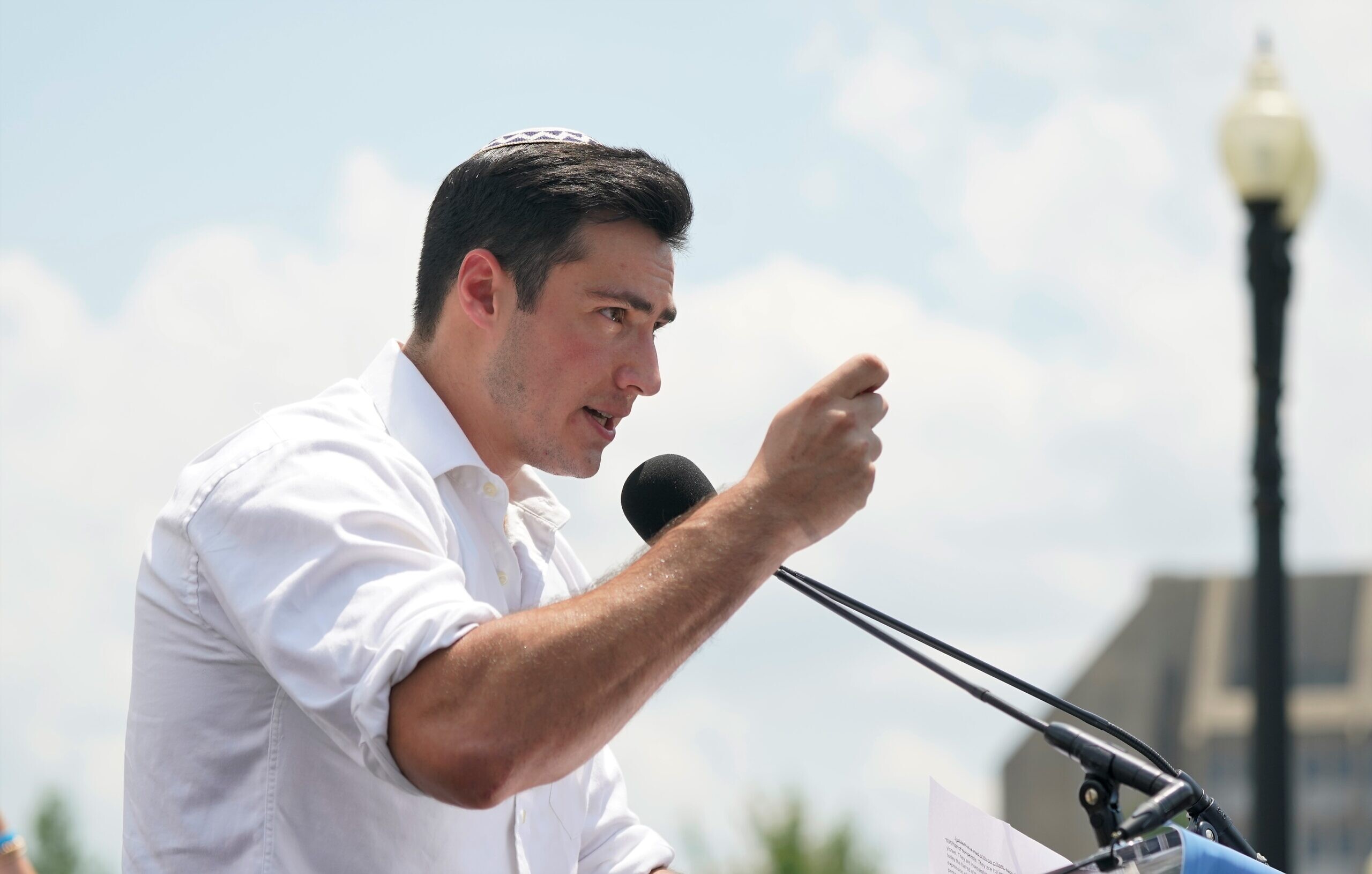 Daniel Raab, a University of Illinois student leader targeted for supporting Israel, speaks at “No Fear: A Rally in Solidarity With the Jewish People” on the National Mall in Washington, D.C., on July 11, 2021. Credit: Chris Kleponis.

‘There was such a sense of camaraderie’

Many of the younger set chose to be closer to the stage. Rachel Underweiser, 24, who came from Providence, R.I., with the group Together Beat Hate, said it was incredible for her to see so many people come out to support the rally.

“I was so surprised by the number of people I saw. I was personally nervous that not that many younger people would show up just because I hadn’t been seeing it on my social media, but I feel like the speakers were incredible. There was such a sense of camaraderie,” she said.

That even included the speakers, said Underweiser, who came down from the stage and mingled with the crowd.

Raquel Bond, another young attendee who is originally from Tijuana, Mexico, said that she came to the rally to support Israel and Zionism, having grown up in what she called an anti-Semitic family and never met a Jew until she was an adult.

“It was only then when I realized that anti-Israel was anti-Semitism, and so that’s why I feel so strongly about this cause as someone that didn’t grow up as part of the community that we should be allies,” she said.

Bond, who works for a Latino-focused nonprofit in D.C., believes it is vital to share the pro-Israel perspective and combat anti-Semitism in the Latino community. This anti-Semitism, which was the result of Soviet and anti-imperialist influence in Latin America, is rarely discussed.

Bond expressed what was by far the majority opinion of the rally—that anti-Israel, anti-Zionist sentiments, equal anti-Semitism. 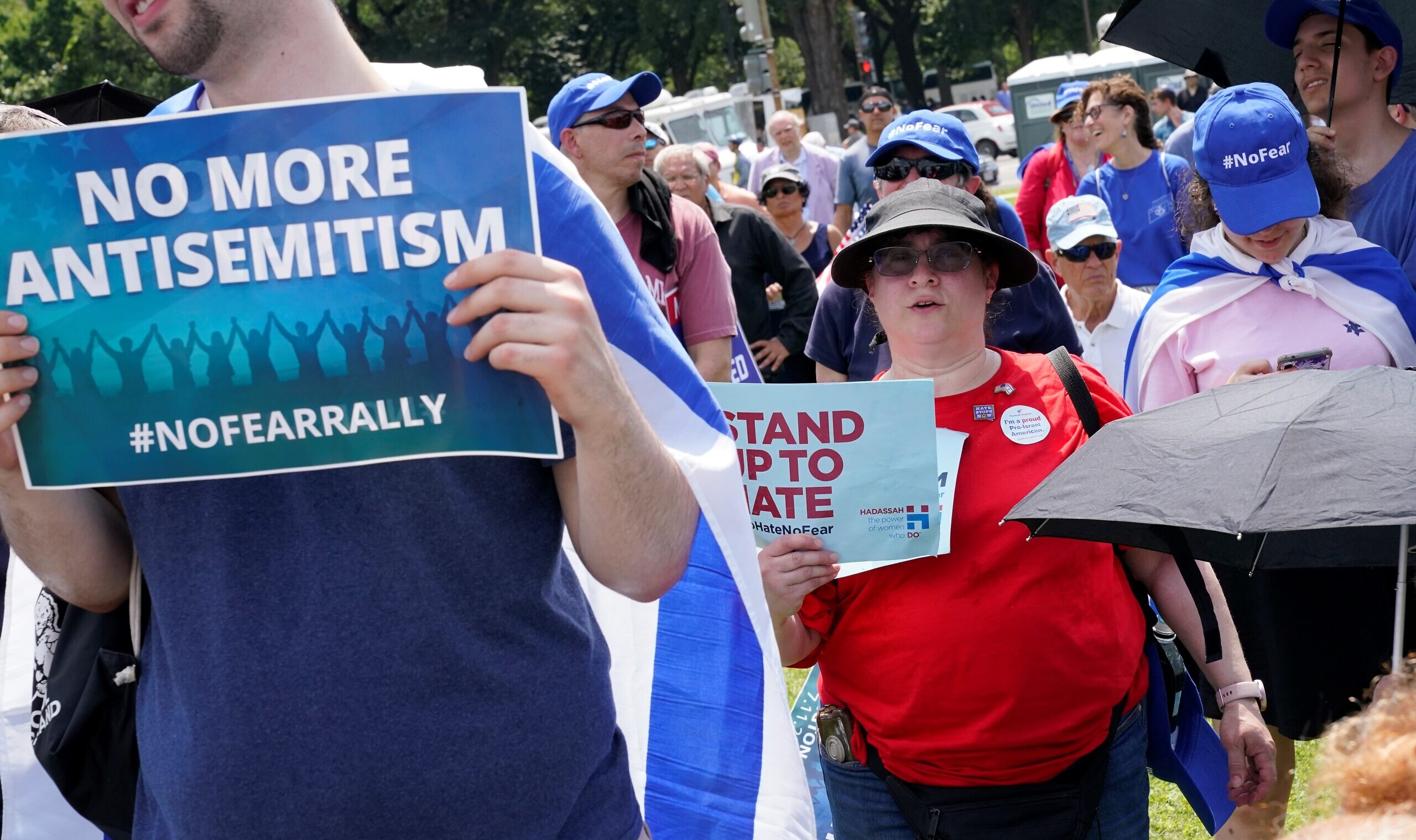 Spectators at the “No Fear: A Rally in Solidarity With the Jewish People” on the National Mall in Washington, D.C., on July 11, 2021. Credit: Chris Kleponis.

‘We have had enough’

Co-organizer Melissa Landa, founding director of Alliance for Israel, told the crowd that they were there to “proclaim our refusal to accept a life of fear, intimidation and submission to those whose hatred of us compel them to harass our children on college campuses and beat them up in the streets, attack our rabbis inside their synagogues and outside Jewish day schools, and spread vicious lies about us in the hallowed halls of Congress.”

Anti-Semitism, she said, was a poison that seeps through the foundation of American society, exacerbated by the anti-Semitic rhetoric from lawmakers such as Reps. Marjorie Taylor Greene (R-Ga.), Ilhan Omar (D-Minn.) and Rashida Tlaib (D-Mich.).

“We have had enough. We are a courageous, resilient and creative people, always celebrating life and contributing generously to society. And we will continue to do so,” said Landa. “But we are also strong and determined, and strong and determined we will remain demanding change until this Jew-hatred stops.”

Landa said the idea for the rally was encouraged by Elisha Wiesel, son of Holocaust survivor and Nobel laureate Elie Wiesel. A business executive, he attended and spoke to the audience.

Wiesel called for tolerance and unity among the Jewish people. He noted that on Tisha B’Av—the holiday commemorating the destruction of the First and Second Temples in Jerusalem, which is observed this year from sundown on July 17 through the evening of July 18 and marked by a 25-hour fast—the sages teach that baseless hatred of Jew against Jew led to some disastrous results in history.

Many of the speakers, including those who were not Jewish such as columnist and television personality Meghan McCain, proudly proclaimed to be Zionists.

Most notably was Rabbi David Saperstein, former ambassador-at-large for International Religious Freedom during the Obama administration, who while supporting the Jewish state said he did not support the “occupation.” 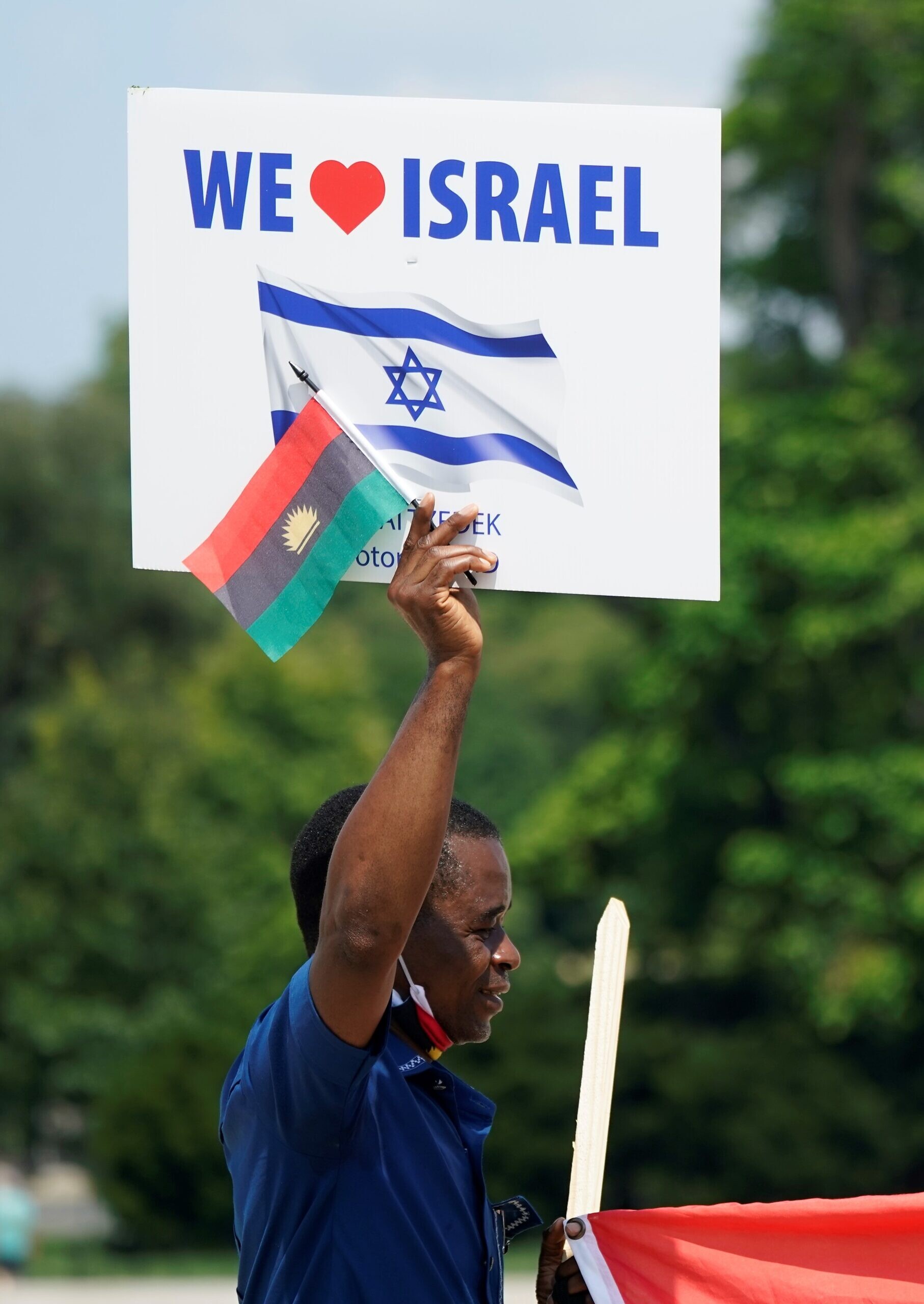 A spectator with a sign at the “No Fear: A Rally in Solidarity With the Jewish People” on the National Mall in Washington, D.C., on July 11, 2021. Credit: Chris Kleponis.

Other groups on the left, like Americans for Peace Now, weren’t among the sponsors since they have said they don’t agree with the rally’s consensus that anti-Zionism and support for the BDS movement is anti-Semitism.

According to Ron Halber, executive director of the Jewish Community Relations Council of Greater Washington, the rally started out unusual for the Jewish community because the initial effort came from small, largely unknown groups, rather than national ones.

It was not until Wiesel became involved that it gained credibility and major sponsors, noted Halber.

“I think that this rally, which started out as a very small, grassroots effort—as a result of Elisha Wiesel’s guidance, wisdom and leadership—really turned into something the community could be proud of,” said Halber, who spoke at the rally.

He said that from his experience organizing rallies, he believes that there were more than 3,000 or even more than 4,000 attendees.

While it’s not a number that matches major rallies like the one held during the First Intifada in the early 2000s, which brought out 100,000 people, or the rally for Soviet Jewry in 1987 that brought 250,000, the turnout, he said, was good for the circumstances.

“It was horrible heat. You have to remember, nobody is around in July here in Washington. Everybody is on vacation,” said Halber. “All the kids, all the youth, are at camp or are doing their jobs, and everybody—as soon as they lifted the COVID restrictions—is out of here on vacation.”

Added to that Congress being out of session, it was a very difficult time to hold a rally, according to Halber.