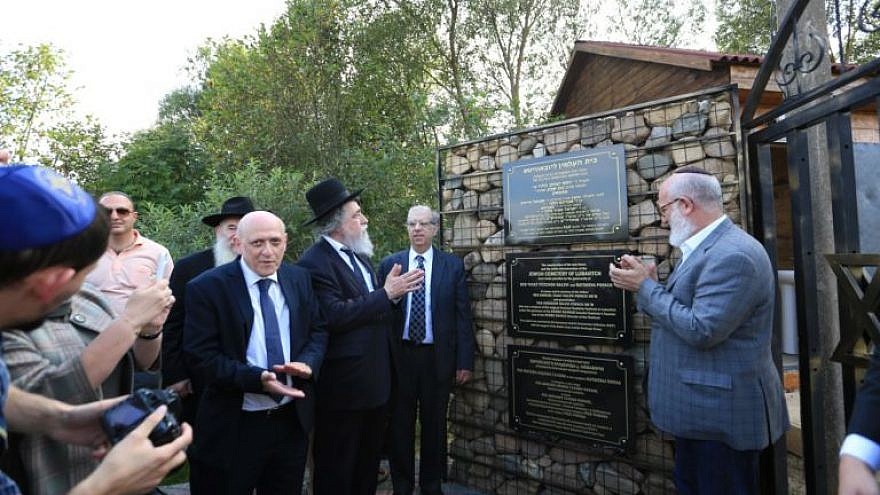 The European Jewish Cemeteries Initiative (ESJF), together with the Chabad-Lubavitch movement and Geder Avos Jewish Heritage Group, Inc., held a historic unveiling ceremony on Aug. 26 of a new preservation project at the Jewish cemetery in Lubavitch, Russia, the small village where the Chabad Chassidism was based for more than 100 years, and where some of its major rabbis and historical figures are buried.

“Initiatives like these are vital because of neglect, economic and agricultural development, and vandalism,” said Rabbi Isaac Schapira, founder and chairman of the ESJF board. “Around a quarter of all Jewish cemeteries in Eastern Europe were already destroyed in these regions during the Nazi and Soviet periods. Most of those that have remained lie neglected principally because their communities were wiped out in the Holocaust, and are open to the elements and at risk of industrial, domestic or agricultural encroachment or destruction.”

Founded in 2015, the ESJF has preserved and built fences in more than 100 Jewish cemeteries in seven countries in Central and Eastern Europe, mostly in the towns and villages whose centuries-old Jewish communities were destroyed in the Holocaust. Often, the Jewish cemetery is the single remaining witness to the once flourishing Jewish community life that existed for so long in these settlements, and so preservation is both a religious and moral obligation for Jews, as well for the maintenance of the memory of the Holocaust and its lessons for future generations.

This ESJF project in Lubavitch, the first of its kind in Russia, included the preservation, fencing, lighting and construction of a new access road and bridge at this cemetery, which was founded in the early 19th century.

The ceremony was attended by numerous guests from the United States and Israel, in addition to leading rabbis of the Chabad movement, including Rabbi Yehuda Yaroslavsky, general secretary of the Chabad Bet Din in Israel and rabbi of Nachlat Har Chabad in Kiryat Malachi; Rabbi Yitzchak Kogan, director of Bronnaya Synagogue Agudas Chasidei Chabad in Moscow; and Eduardo Elsztain, philanthropist and activist from Argentina.

“It is my honor and privilege to be able to facilitate this project,” said Popack at the ceremony. “The impact that this small town had has on the entire world is tremendous, and to me, personally, it means everything. My family’s destiny had been intertwined with that of Lubavitch. The spirit and flame of Lubavitch lives in our family.”