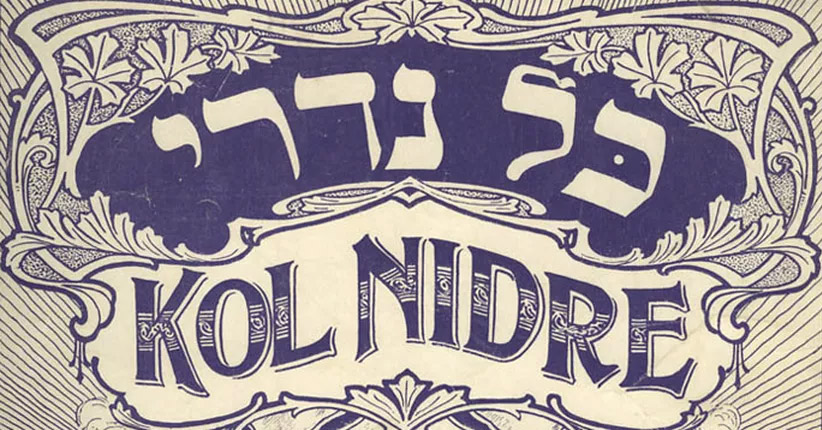 In just a little while, the notes of Kol Nidre will start playing, that melody that moves the one who knows its meaning as much as the one who knows nothing about it. Theodor Reik tells us that, when listening to it at friends’ house, he experiences a deep sadness but ignores what piece he is talking about until, informed by his hostess, he recovers an old memory: “I remembered,” he says, “my childhood and the holidays when I used to go to my grandfather’s house, in a small village in Hungary, with my mother and my sister … During my visits to that town, I often heard the ancient melody of Kol Nidre and remembered the primitive synagogue, the men in white robes and long beards that swayed to the rhythm of prayers, my grandfather next to me. I remembered the emotion of the parishioners when listening to the Kol Nidre singer. I remembered the clear signs of deep contrition of all those men with a solemn expression, and their touching participation in the ceremony … ”

An old melody, whose origin is lost in the night of history, shudders to the bones to those who hear it. It is inevitable to ask how, why something that seems so distant in time and space, something arising from experiences apparently so strange to our contemporaneity has nevertheless such a strength that crosses all the ego defenses, all the “secular” arguments, all postmodern invocations. It is as if its cadence touched an intimate and ineradicable core, the very heart of the human, beyond beliefs, ideologies or conscious discourses.

Kol Nidre marks the beginning of Yom Kippur, the Day of Atonement, the most solemn date of the Hebrew calendar. Yes, I know there are historical explanations – the prayer referred to the converts by force in the Inquisition, who asked for divine forgiveness for their apparent apostasy, and other equally “logical” versions – but historians doubt all of them. What remains, however, is the evocative power of his music and his lyrics, that sort of Proustian madalena not of an individual, but of a people throughout the millennia.

In my case, it comes to me in an undoubted way. When I reached adolescence I began -as it should be- to question my father and, with him, the tradition he was trying to convey. I distanced myself from both, I put on the shirt of rebel and atheist, of militant of left and of “religion is opium …”. Anyway, we already know the script of that age. My father was not exactly religious, but he respected the dates and the rituals. He fasted in Kippur, went to the synagogue to say Izkor (prayer of remembrance of the dead) for his parents, set up wonderful Pessach dinners with the corresponding readings … I stopped appreciating all that, I discarded those marks for years, I thought I was a “woman” new “(we always talk about the new man, but now we can make that turn …). Until, already grown, mother of two children and premiering partner, I knew that my dad was very sick. I went back to see him. My way of recovering something from the bond was to take him to the synagogue-he was very weak-to listen to Kol Nidre, that I knew was very important for him. After twenty years of crossing the path every time I passed a shul, it was a moving experience for me. We stand, together, without speaking, trembling to the sound of the notes. We both cried in silence.

The next year my dad died. Fundamental events in my life led me to recover my Judaism as well as to rescue my father. Thirty years have passed since that moment of return (teshuvah, in Hebrew: what is done precisely at this time).

Every year, when I’m standing in the synagogue and Kol Nidre starts to sound, I shudder with sadness, emotion, gratitude and joy, all together. “My” Kol Nidre is the image of my father and I together, he tall and handsome still, and something that emanates from him towards me like an elevated vessel that, by the force of gravity, passes its contents towards the smallest one.