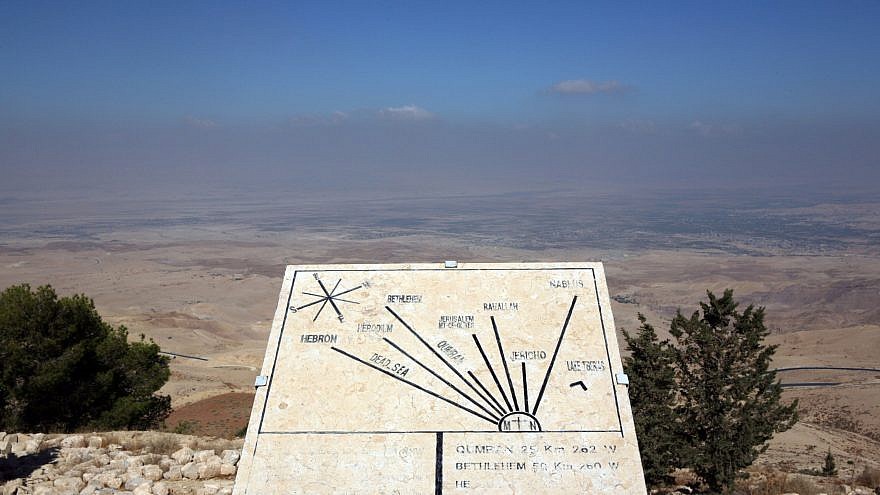 There are hundreds of references to Israel on every page of Tanach, according to Tuly Weisz, founder and CEO of Israel365. As such, in honor of Israel Independence Day on April 19, Weisz will release a new, hefty, 2,000-page Bible that centers on the land of Israel, the people of Israel and the dynamic relationship between them.

The Israel Bible, edited by Weisz and co-published by Israel365 and Menorah Books (an imprint of Koren Publishers Jerusalem), is meant to demonstrate that Israel belongs to the Jewish people—today and for thousands of years before. 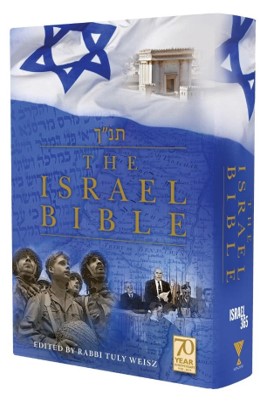 The Israel Bible, through its more than 1,000 study notes, presents that the founding of the modern State of Israel is the Bible’s prophecy fulfilled. Every Israeli prime minister, including the current one, is quoted in the volume, alongside classic Jewish commentators. The book contains Hebrew lessons and what Weisz calls “Israel lessons.”

Even the dust cover’s live design weaves together the iconic image of the paratroopers liberating the Western Wall 50 years ago and the ancient Temple, enveloped in an Israeli flag.

“The Hebrew Bible is a description of a love story between a people and its land,” said Rabbi Jacob J. Schacter, professor of Jewish history and Jewish thought at Yeshiva University in New York. “From its earliest history, Eretz Yisrael has been central to Jewish living and Jewish destiny.”

Christian Zionists also see the Bible coming to life in Israel.
“Today, most evangelical Christians believe in a real world interpretation of the Bible,” explained David Parsons, Vice President and International Spokesperson for the International Christian Embassy in Jerusalem. “There are all these verses that connect the Jewish people to the land and promise to bring them back. This is fulfilled with the return of the Jewish people to Israel today.”

Weisz said at least five core concepts in the Tanach relate to the founding of the State of Israel. First, the ingathering of the nations (in Hebrew, kibbutz galuyot) is promised in multiple places.

“In Ezekiel 34:13, we learn that although the people of Israel are scattered throughout the four corners of the earth, God will one day gather the people of Israel and return them to their ancient soil, the Land of Israel,” explains Weisz. “With the founding of the State of Israel and the many waves of immigration that have taken place in recent history, we are beginning the fulfillment of this miracle.”

Second, he cites the revitalization of Hebrew. Weisz said the Prophet Nehemiah (13:24) bemoaned the fact that in 70 years of exile, the Jews of his generation had forgotten how to speak Hebrew.

“After 2,500 years of exile, Hebrew was nearly extinct, reserved exclusively as the Jewish holy language for prayer and study,” said Weisz. “This all changed with the advent of the Zionist revival and the founding of the State of Israel.”

Third, “we are witnessing the deserts blooming,” said Weisz. He noted that while under foreign occupation, as described in the book of Isaiah, Chapter 5, the land of Israel was arid and dry. “Under Jewish sovereignty, it has come to life.”

Next, Weisz said the land of Israel was born out of a spiritual partnership between Jews and non-Jews. In biblical times, it was Cyrus’s edict that allowed the people of Israel to return to the land of Israel and rebuilt the Temple, which was completed in the sixth year of the reign of Darius, with his permission.

Similarly, the British government’s 1917 Balfour Declaration possessed a similar promise. And, in 1948, when U.S. President Harry Truman recognized the State of Israel, he said: “I am Cyrus.”

Fifth and finally, “Since the founding of the State of Israel, we are witnessing growing unity between Jews and non-Jews,” said Weisz.

He noted that in Isaiah 49:22, the prophet describes the great contributions that the nations will play in the resettlement of the land. “In modern times, this prophecy is being fulfilled by the unprecedented number of non-Jews who visit, support and pray for Israel,” said the professor.

However, Yaakov Beasley, who has lectured on the Bible for 20 years and crafted the commentaries on the books of the Prophets for The Israel Bible, told JNS.org that one must be cautious to assume that the return of the Jewish people to Israel in the modern era is a sign of redemption.

Specifically, Beasley said he found in his study of the prophets Haggai, Zechariah and Malachi “that the return of the Jewish people to Israel in the time of the Second Temple parallels what we see today. Then, like now, there were idealists, driven by hope that when the Jewish people returned to Israel that everything would be good and redemption would come.

“While these prophets maintained some level of idealism, they taught that unless the Jewish people understood why they lost the Temple the first time, they would not be destined to keep it the second time.”

Still, Beasley said the Tanach is the key connection between the Jewish people and the land of Israel. He noted that when David Ben-Gurion settled the land as an atheist Zionist, “he understood the power and importance of the Bible as the central document, as our deed to the land.”

He said Bible study has been under exercised for years in the Jewish curriculum.

“Seventy is a number that represents wisdom and maturity,” noted Beasley. “As the country reaches 70, it is fitting that the Bible one again assumes a central place in the Israeli narrative.”