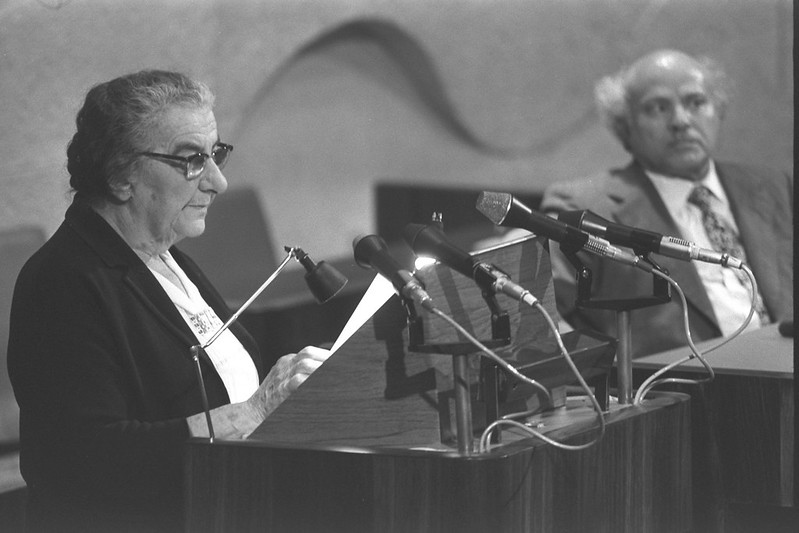 On the way to a meeting on Golda Meir Boulevard in Jerusalem, I struck up an interesting conversation with the cab driver about Israel’s fourth prime minister. Golda Meir is memorialized with streets across the country named in her honor and yet many people in Israel lack the adoration that she has achieved overseas. The cab driver explained that this is due to the Yom Kippur War, which took place in 1973 under her leadership. That conversation led to my reading Lioness, a thorough and unbiased biography of Golda Meir written by Francine Klagsbrun, as I needed to better understand the nuances of this complicated period in Israel’s history.

At the age of 7, Golda moved from Russia to Milwaukee, Wisconsin, and subsequently made Aliyah to pre-state Israel in her earlier 20s. A protégé of David Ben Gurion, Golda was dedicated and focused, and moved up the political ladder through a relentless work ethic, brains, and charm – a key skill that helped her turn world leaders into friends and generate positive world opinion towards Israel.

Every fiber of Golda’s being was dedicated to the Jewish people. During World War II she fought to save Jews from the Nazis. After the war, she was involved in breaking the British blockade and bringing Jews from displaced persons camps in Europe to British Mandate Palestine. In 1948, after Israel declared its independence, Golda spent over half a year as Israel’s Minister to the Soviet Union. During her brief tenure in Russia, Golda learned of the plight of Jews who were denied visas to emigrate to Israel. She never forgot the refuseniks and invested considerable time and effort throughout her life focusing the world on the human rights abuses of the Russian government.

Golda served as Israel’s first minister of labor for seven years and then became the minister of foreign affairs for over a decade before assuming the role of prime minister in 1969 until 1974. Through the years, Golda became a beloved icon as the authoritative, fiery, hard-hitting maternal protector of her baby, the young and feisty State of Israel.

In addition to her lifelong career as an Israeli diplomat, Golda was also an accomplished fundraiser. In January 1948, after the United Nations approved the Partition Plan, Golda traveled to the U.S. and raised $25 million, which was desperately needed to purchase arms and equipment for the fledgling country’s armed forces. Ben Gurion frequently recalled Golda’s extraordinary efforts and often remarked, “Someday, when history will be written, it will be said that there was a Jewish woman who got the money which made the state possible.”

The primary controversy that scarred Golda’s reputation revolves around the 1973 Yom Kippur War. Immediately before Egypt and Syria attacked Israel, the country’s top military and intelligence sources assured Golda that no attack was imminent, and that the country should delay mobilizing the armed forces. Although her heart told her otherwise, Golda heeded their incorrect advice. Once the war began, though, Golda was at her military and diplomatic finest. Displaying determination, composure, strength and common sense, Golda led the country to a hard-fought victory. However, the army’s post-1967 air of invincibility had been forever shattered. Understanding the shift in public opinion, Golda resigned soon after the conflict ended.

Golda Meir passed away in 1978. While Jews worldwide remember her with pride and fondness, Golda remained an object of scorn to some Israelis for many years. Recently, Golda’s legacy has been rehabilitated after the Israeli state archives published a 700-page volume of her notes and documents, which proved that the security establishment blundered miserably at the outset of the war and that Golda immediately assumed the role of commander in chief and skillfully guided the country to victory.

Golda Meir dedicated her life to the Jewish nation. Many people are gratified that the truth surrounding the final chapter of Golda’s public life has finally been uncovered and that she is taking her well-deserved place among the great pioneers and leaders of the State of Israel.

Gedaliah Borvick is the founder of My Israel Home (www.myisraelhome.com), a real estate agency focused on helping people from abroad buy and sell homes in Israel. To sign up for his monthly market updates, contact him at gborvick@gmail.com.