A new exhibition in New York City invites the public to see, smell, listen and touch artifacts and items pertaining to the rich Yemenite Jewish culture.

The American Sephardi Federation’s “The Teimani Experience” is a multi-sensory exhibit that features rare photographs, religious items, Yemeni wedding jewelry, clothing, fragrances, music, voices and more. It is part of the Yemenite Conference—the first-ever three-day symposium that focuses on the shared cultural values and history of Jews and Arabs in Yemen. 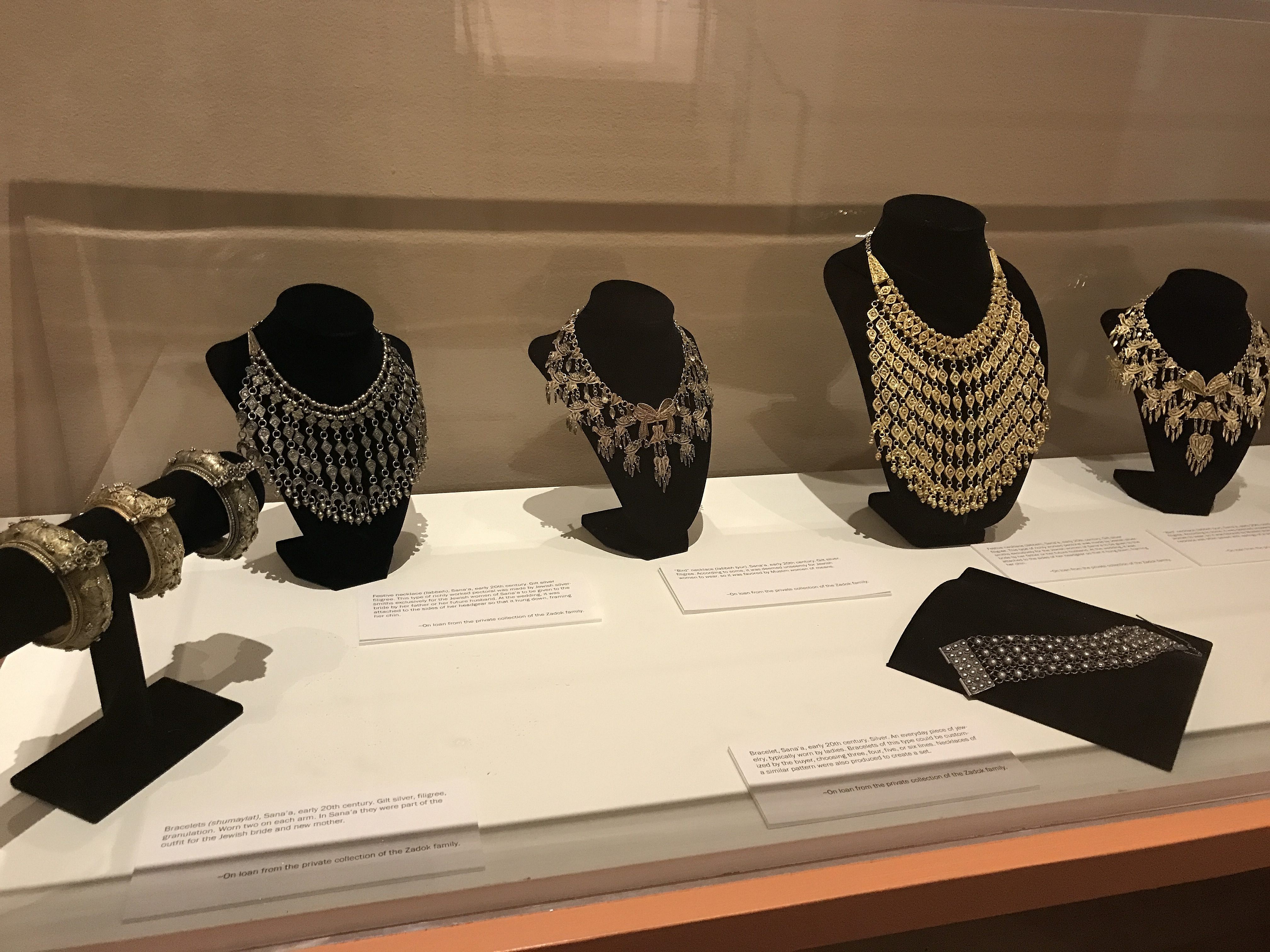 Many of the artifacts on display are on loan from conference participants, according to co-curators Drora Arussy and Eddie Ashkenazi. For example, Arussy explained that one of the conference speakers is an OB-GYN in Israel who enjoys collecting stamps. He owns one of the first stamps produced in Yemen and offered to it to curators to have on display as part of the exhibit. Afterwards Arussy and Ashkenazi discovered that another person had about 400 letters written between Yemen and Israel that they were willing to loan for the exhibit.

“The idea for the exhibit came to be after the conference program had already started to become finalized,” said Ashkenazi. “People were like, ‘I am speaking about this, and I kind of actually have it. Do you wanna do something with it?’ Be it jewelry, letters, books. So we were like, ‘Sure!” and we slowly but surely turned it into an exhibit.”

‘Showcase the beauty and custom’

Among the literary, decorative and cultural materials are samples of trilingual letters in Hebrew, Aramaic and Arabic from Jews in Sana’a’, the capital of Yemen, written to people in Israel; handwritten religious texts; mural art depicting the setup of a typical Yemenite Jewish home; robes and head dresses worn by Jews in Yemen; Yemenite spices to smell and music to hear; and recordings of Yemenites reading biblical texts in three languages.

Visitors are also invited to touch jewelry made by Yemenite Jews. Some of the pieces were crafted by Jewish silversmith exclusively for the Jewish women of Sana’a, to be given to a bride by her father or future husband. At the wedding, it was attached to the sides of the bride’s headpiece. 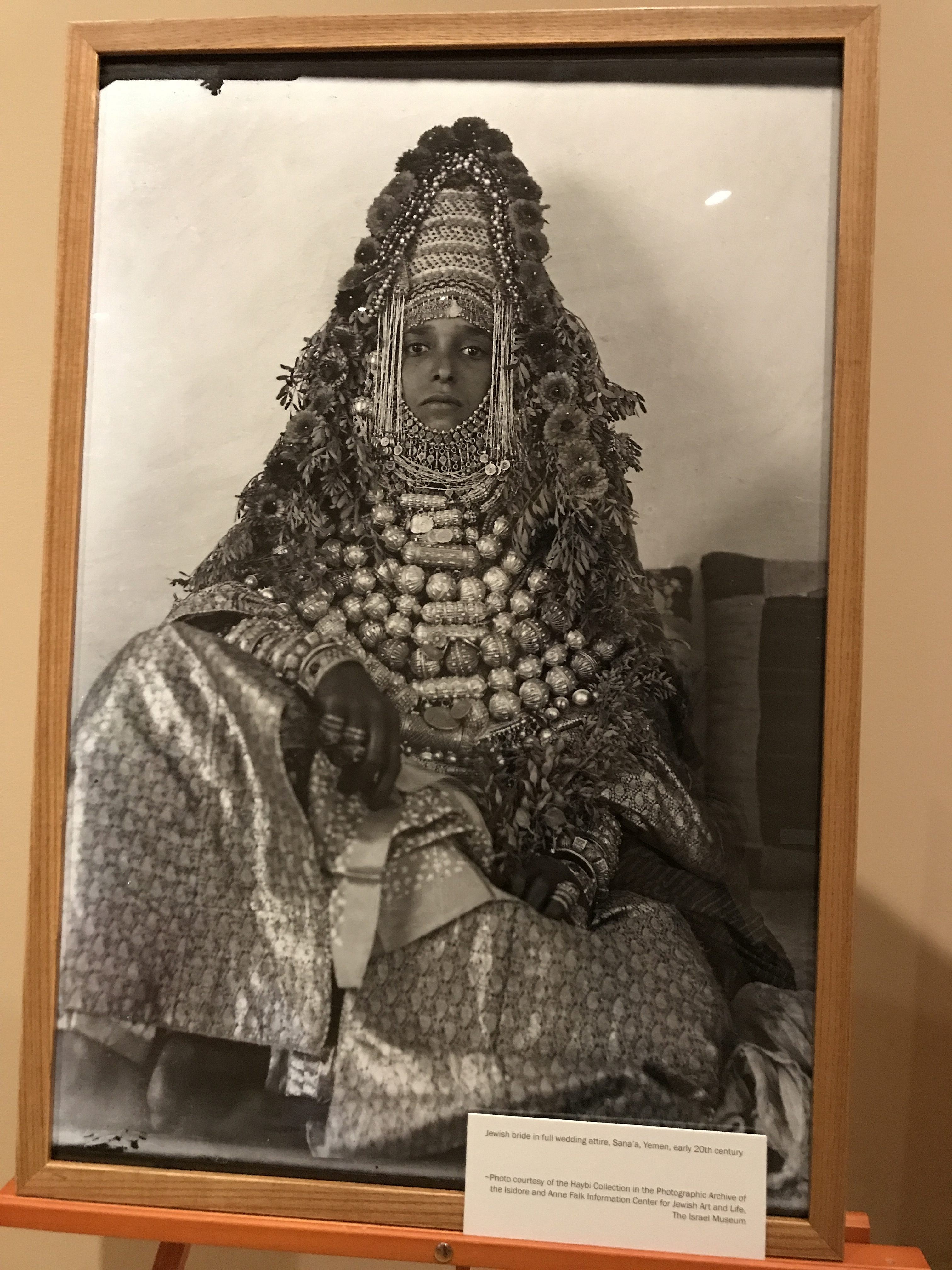 A young Jewish bride in Yemen wearing many pieces of bridal jewelry, along with a headpiece. Credit: Shiryn Solny.

The centerpiece of the exhibit is a recreation of a “Birth Mother’s Room,” a Yemenite tradition that celebrates a successful birth and healthy mother, but also keeps her isolated during the state of postpartum bleeding, which is considered impure in Jewish tradition.

The new mother would sit opposite the entrance door, behind a triangular box, and receive guests from her secluded corner of the room, where she would sit in a solemn position for several hours at a time, for 30 days. The room was recreated in Israel by Yemenite women from Sana’a who wanted to continue the tradition.

“If I say that the exhibit grew around this, that’s 100 percent accurate,” acknowledged Ashkenazi. “We needed a way to showcase the beauty and this unique custom of a ‘Birth Mother’s Room,’ and it would look empty if there was nothing to support it and give additional insight into the life [of Yemenite Jews]. So this led to the rest of the room.” 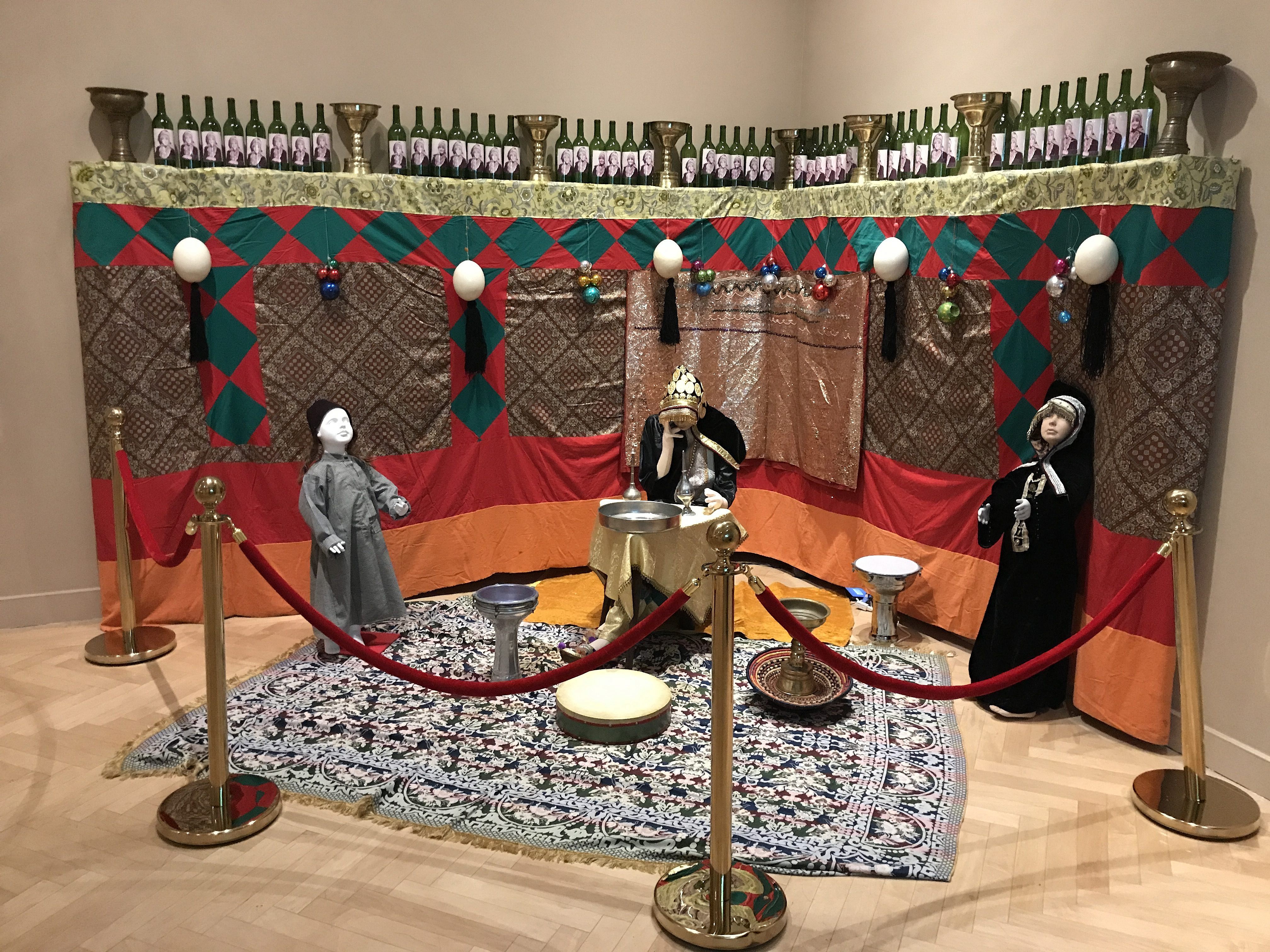 A recreation of a “Birth Mother’s Room.” Credit: Shiryn Solny.

Artifacts in the exhibit also give a glimpse into the religious life of Jews in Yemen. When Torah was read in the synagogue, it was said in Hebrew, followed by Aramaic and sometimes Arabic. Men would also study Torah in three languages; until this day, some communities in Israel read Aramaic alongside the Hebrew texts.

‘Seminal to all aspects of Jewish studies’

Because there was no printing press in Yemen until about the 1950s, the country was a “manuscript culture,” said Ashkenazi, meaning that everything was written by hand. Many religious texts were handwritten because ordering numerous printed books from out of the country was expensive and often hard to obtain. Fathers taught their sons Torah and Jewish law either during or after work, and due to the scarcity of books available, boys would sit around one book and learn to read it from all directions, even upside-down.

The co-curators said they gathered facts about Yemenite Jewry from interviews, their own research and that of the Diarna Geo-Museum of North African and Middle Eastern Jewish Life, which digitally preserves the physical manifestations of Jewish history throughout the region.

“The study of Yemenite Jews is seminal to all aspects of Jewish studies,” said Professor Ephraim Issac, founder of the Institute for Semitic Studies. “Yemenite Jews are known by scholars worldwide to be devotedly religious, having preserved a distinctive Jewish history and culture going back to the late Second Temple period. As many scholars—Sholomo Goitein, Haim Rabin, Shelomo Morag, among others, have maintained—no other Jewish community has made such distinctive contribution in the preservation of the language, religion and literature of Judaism like Yemenite Jews. They are the only Jews who to this day still read the Torah and Haftorah in both Hebrew and Aramaic [Targum], as prescribed in the Mishnah, on Sabbath and festivals, and pronounce every letter of Hebrew distinctively in their readings.” 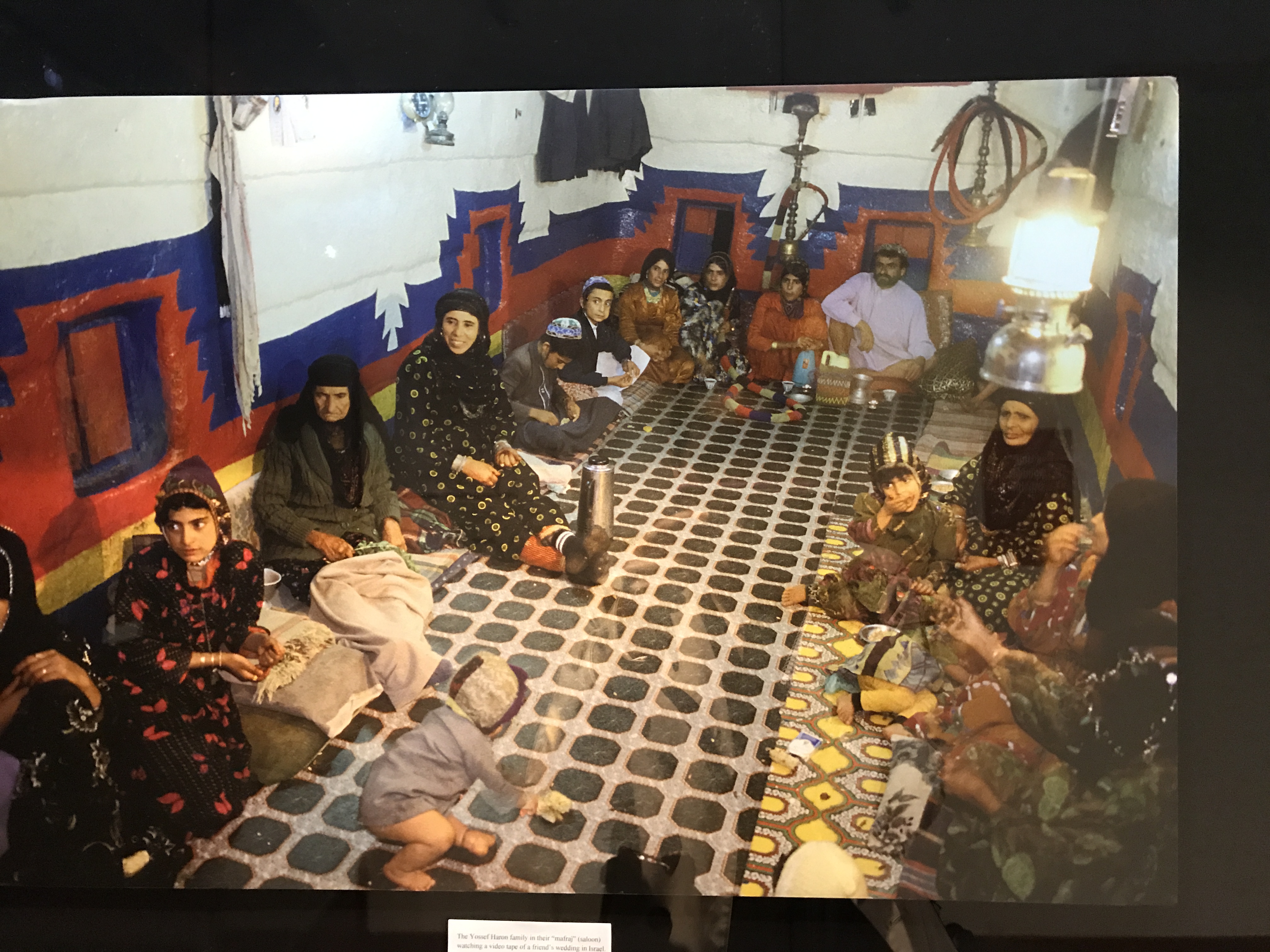 A photo showing a Yemenite Jewish family sitting in the multi-function room of their home, which would be used for sleeping, eating and entertaining. Credit: Shiryn Solny.

The exhibit explains that Yemenite-Jewish history started in the First Temple period. According to one tradition, following the meeting between King Solomon and the Queen of Sheba, the king sent her home with a group of Jewish scholars and advisers. They represented the 12 tribes of Israel, and this group was at the center of Yemenite Jewry developing. Another tradition states that Yemenite Jewry emerged a short while later when a group of upper-class Jews left Jerusalem after the Prophet Jeremiah foresaw the Kingdom of Judah’s destruction. Their travels took them to Yemen, where they eventually settled.

Jewish settlement in Yemen was not centralized, noted Ashkenazi. Jews were scattered throughout the entire country, and communities tended to be very small, with maybe two to 10 families in a village. When there was a need to assemble for schools or minyans, multiple villages would come together. Some of the larger cities, however, did have Jewish quarters with multiple synagogues and places of study.

Today, only about 100 Jews remain in Yemen, concentrated in Sana’a.