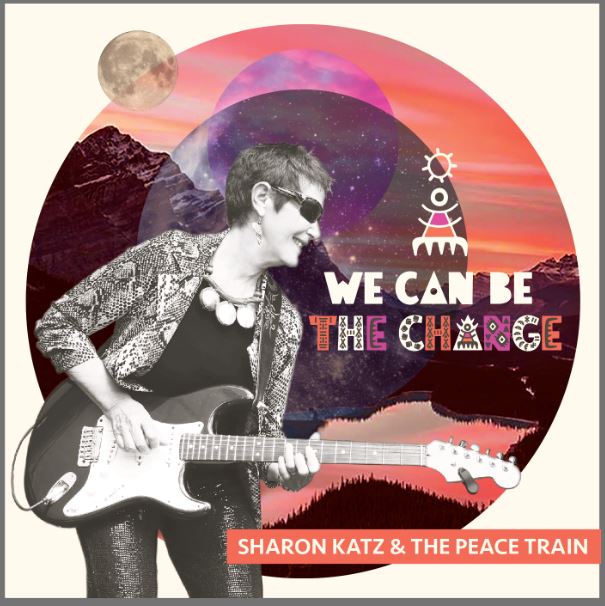 It is unusual when a person combines great talent with compassion for others, but from personal and perhaps biased experience, I can attest that South African musician, Sharon Katz, has both in spades.

Music can soothe and heal the soul, no matter where you are from. Imagine growing up in South Africa during the time of Apartheid as a discretely rebellious Jew. For Sharon Katz, music was a salvation and a door to a world she wasn’t supposed to be a part of, but later thrived in and found her voice to speak up.. Today, Katz is a South African Musician and Music Therapist, and Director of The Peace Train Project.

Born in Port Elizabeth or now known as Nelson Mandela Bay in 1955, Katz‘s life was changed at 15 when she saw an anti-apartheid play, and her eyes were opened. The Jews of that area were in an enclave of their own in a way, and people lived separate lives and did not mingle much. Katz took refuge in music and taught herself to play the guitar at the age of 11 by listening to the music of Simon and Garfunkel, Peter, Paul, and Mary, and Pete Seeger. That led to a life in music and making a difference, and the formation of the life changing Peace Train Project, where a mingling of music and compassionate activism was encouraged and grew. 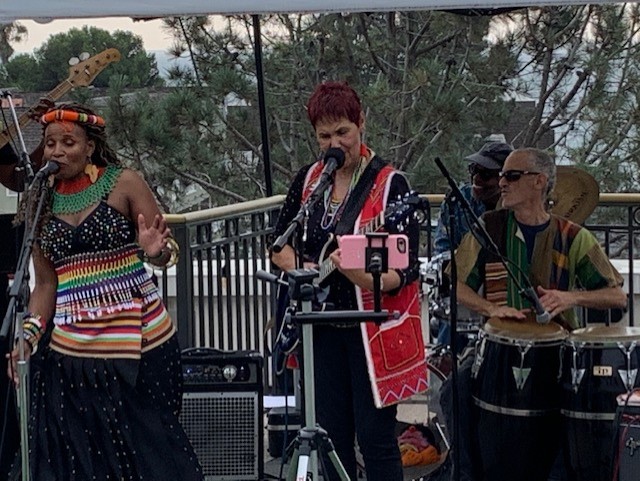 In her later teen years, she formed friendships with anti-apartheid actors John Kani [of Black Panther fame] and Winston Ntshona. She would visit them in their homes in New Brighton Township. However, she was highly secretive about this as she knew if she told others about it, they would try to stop her as it wasn’t considered safe. In a way, she led a double life. She was also active in the Jewish community and had a very strong communal life within her family, school, and various bands and singing groups.
Music became her way to try and bring together a torn nation. The Peace Train Project was formed in 1992 as a way to honor Nelson Mandela, who would become president in 1994, and help heal a divided country. By then, Katz had her master’s degree in music therapy and along with her Zulu singing partner, Nonhlanhla Wanda, formed a 500-voice multiracial and multicultural youth choir. They hired a train, dubbed “The Peace Train”, and they traveled to various and still separated communities all over South Africa. The goal was to rehearse and build trust as they stopped and performed in different towns. Katz likes to say that the Peace Train was a moving billboard for Nelson’s message of peaceful coexistence. In 2013, they celebrated 20 years of that original ride through South Africa.
A 2015 documentary, “When Voices Meet”, chronicles this time and the 20 years that follow. The documentary can be found on Amazon Prime.
Later on, Katz moved to Philadelphia and it became her home base where she taught classes and from where she traveled to concerts all over the USA and the world spreading her message of humanitarianism.

In 2018, she and her life and business partner, Marilyn Cohen, made another life changing plan by moving to Tijuana, continuing a life of adventure and giving back. This move was inspired after Katz met someone from The San Diego PeaceMakers Fund who asked her if she would be willing to do cross border work. Katz then connected with Alida Guajardo de Cervantes and Promotora Bellas Artes in Tijuana. Promotora Bellas Artes is an organization that works with the school children that come from poorer neighborhoods, bringing music into their schools. The synergy between Katz and Guajardo de Cervantes was so great that together, they devised the Transcending Barriers Project as well as Katz becoming Promotora’s guest artist.
Together with the Promotora, Katz worked with 1,500 children, going from school to school in Tijuana teaching them South African songs, etc. Later those children, along with Katz and her band and an orchestra, performed a concert together. The musical director of Promotora Bellas Artes, Daria-Abreu Feraud, a Cuban woman, invited Katz to visit and perform in Santiago de Cuba in Cuba in 2019.

In addition, for the last five years, Katz has been working under a grant given to her by the San Diego PeaceMakers fund. She works as a music therapist with Survivor’s of Torture International in San Diego and she also works with migrant shelters in Tijuana. I saw the joy she brought to the families staying at one of the shelters the day I went to take down donations. She played her guitar and sang to them for an hour.
Katz has bands in Tijuana, Philadelphia, San Diego, Berkeley, and in South Africa. Besides all her humanitarian work and traveling around, I can attest that she also puts on a great show!
On Saturday, August 21st, some friends and I went to her show at the Del Mar Plaza on the third level with a lovely ocean view. Everyone was enjoying the lively music and there were children and adults dancing together. Her San Diego band is international with Nomsa Burkhardt from South Africa, Ignacio Arango from Cuba, and Ronnie Stewart as well as Robert Fletcher. All gave good performances. I hope the Del Mar Plaza invites them for an encore. 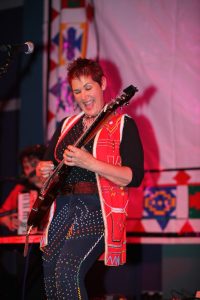 Finally, in October, the Peace Train has a trip planned to Mexico. On October 21, around 20 people from different parts of the USA will converge in San Diego and will cross into Tijuana. They will make a music video at Playas de Tijuana near the border wall. They will visit a shelter, and there will be other events. On October 23, a train will depart Tijuana with the visitors as well as 150 children and families. They will travel to Tecate where they will have rehearsals and friendship building workshops with local children. There will be a big concert at CEART in Tecate. The following day, they will depart for Mexico City, Puebla, and Oaxaca for an additional ten days, but children will not participate on this leg of the tour. Children will be included in the upcoming 2022 cultural exchange program with Oaxaca which will be part of a collaboration between the Peace Train and Promotora Bellas Artes.

For more details and information, Katz’s website is sharonkatz.com