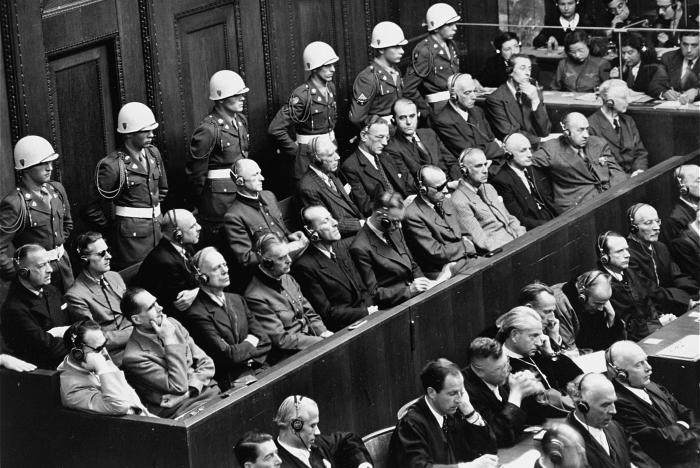 On this day in 1945, 24 high-ranking Nazis go on trial before the International Military Tribunal (IMT) at the Palace of Justice in Nuremberg, Germany, for atrocities committed during World War II.The Nuremberg Trials were conducted by an international tribunal made up of judges from the United States, the Soviet Union, France, and Great Britain. It was the first trial of its kind in history, and the defendants faced charges ranging from crimes against peace, to crimes of war, to crimes against humanity.

Lord Justice Geoffrey Lawrence, the British member, presided over the proceedings, which lasted 10 months and consisted of 216 court sessions.On 1 October 1946, 12 architects of Nazi policy were sentenced to death. Seven others were sentenced to prison terms ranging from 10 years to life imprisonment, and three were acquitted. Of the original 24 defendants, one, Robert Ley, committed suicide on 25 October 1945 (before he was brought to trial), and another, Gustav Krupp von Bohlen und Halbach, was deemed mentally and physically incompetent to stand trial. Martin Bormann, Personal Secretary to Hitler, was not present at the trial.

Among those condemned to death by hanging were Joachim von Ribbentrop, Nazi minister of foreign affairs; Hermann Goering, leader of the Gestapo and the Luftwaffe; Alfred Jodl, head of the German armed forces staff; and Wilhelm Frick, Minister of the Interior.On 16 October, 10 of the architects of Nazi policy were hanged. Goering, who at sentencing was called the “leading war aggressor and creator of the oppressive programme against the Jews,” committed suicide by poison on the eve of his scheduled execution. Nazi Party leader Martin Bormann was condemned to death in absentia (but is now believed to have died in May 1945).

Trials of lesser German and Axis war criminals continued in Germany into the 1950s and resulted in the conviction of 5,025 other defendants and the execution of 806.The Nuremberg trials attracted academic controversy as it was seen by some as ‘victor’s justice’. Nonetheless, Nuremberg confirmed many incontrovertible principles of human rights, and a clearer idea emerged of what constituted war crimes and crimes against humanity that could not be derogated from even during times of war. The trials also famously spawned the ‘Nuremberg defence’, wherein a defendant claims that he is absolved from blame because he was simply following orders issued by a superior. The court ruled that such a defence was not morally admissible.