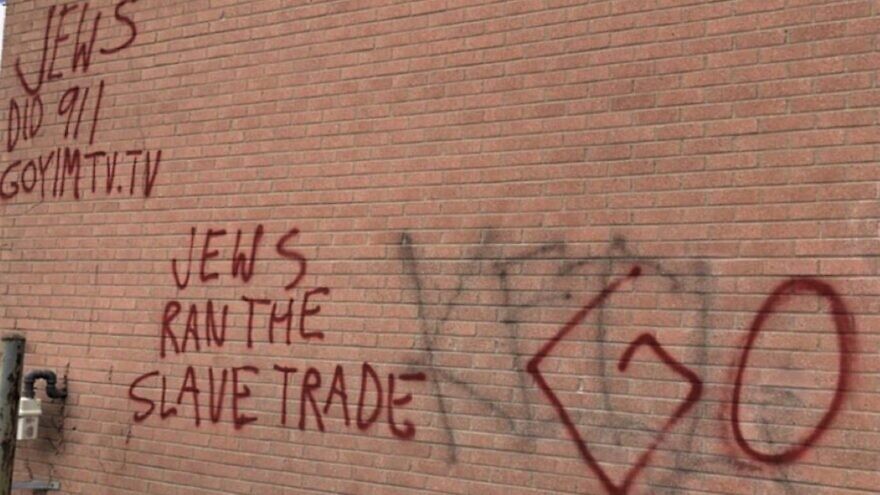 Graffiti claiming that Jews were responsible for the Sept. 11 terror attacks was painted on a building in Toronto and a highway overpass in Canada over the weekend.

Among the writing was “Jews did 911” and “Jews ran the slave trade.” Also painted on the wall of the building was the website for a group known as the Goyim Defense League. Similar graffiti also appeared on a highway overpass outside of Toronto.

According to the Anti-Defamation League, the group is “a loose network of individuals connected by their virulent anti-Semitism. It includes six primary organizers/public figures and thousands of online followers.”

“This disgraceful graffiti promoting anti-Semitic conspiracy theories about Jews was spotted earlier today in Toronto’s east end,” posted the Friends of Simon Wiesenthal Center on Twitter. “Such attempts at spreading hatred will never be tolerated in this city.”

Both Canadian Jewish groups said the incidents were reported to local police and that an investigation is underway.

The vandalism comes amid a spate of anti-Semitic graffiti. Late last month, swastikas were found painted in various locales in Toronto, including on a synagogue, in a public park and on campaign signs for Jewish candidates running for parliamentary election in Canada.

Meanwhile, the Toronto Police Department announced that it is partnering with the UJA Federation of Greater Toronto and will have an outdoor “incident reporting center” on Yom Kippur “that will allow members of the Jewish community to report to our community safety partners any suspicious or criminal events which may have been observed or experienced in the neighborhood or when walking to and from prayer services,” according to the press release from the Toronto Police.

Officials from UJA will be staffing the center on Wednesday evening and again on Thursday throughout the day and will share information with the police as needed. They also held a pop-up security reporting booth during Rosh Hashanah.