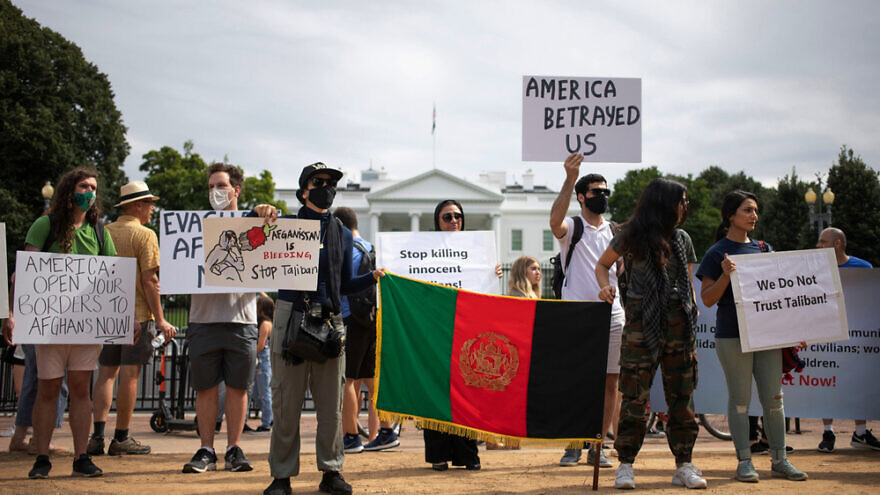 The Taliban’s quick takeover of Afghanistan has Middle Eastern countries deeply concerned about their dependence on the U.S. security umbrella.

Elliott Abrams, who served as Special Representative for Iran and Venezuela during the Donald Trump administration, told JNS that Arab states could be expected to increase security cooperation and consultation with Israel — “though we will not see most of it.”

Asked how this could influence Iran’s thinking, Abrams replied, “I believe that Iran will have concluded the Biden team is not first-rate and wants to avoid confrontations, so Iran is more likely to test them now than it was six months ago.”

“I think the chances of going back to the JCPOA (the 2015 Iran nuclear deal) are down to perhaps 20 percent now, and the big question is what Biden will do as Iran continues its nuclear program — as the IAEA (International Atomic Energy Agency) reported this week,” said Abrams.

Uranium metal can be used to build the core of a nuclear bomb.

Abrams, a senior fellow for Middle Eastern studies at the Council on Foreign Relations, wrote in his Pressure Points blog that the Afghanistan collapse and the Abraham Accords are related in that Arab states face threats in a region dominated by Iran, Turkey, and Israel.

“What is happening in Afghanistan will deepen the impression among Arab governments that they cannot rely on the United States to protect their security as they used to,” he stated.

“So those states have increasingly drawn the conclusion that they have one neighbor who unlike Iran or Turkey poses no threat to them, and who continually displays a firm willingness to use military power against its enemies. That’s Israel.”

Therefore, ironically, the abrupt American withdrawal from Afghanistan could draw some Arab states closer to Israel.

Indeed, this week in Jerusalem, Abbas Kamel, director of the Egyptian General Intelligence Directorate, met with Israeli Prime Minister Naftali Bennett, where he extended an invitation for a state visit by Bennett to Egypt in the next few weeks. A visit by Bennett to Egypt would be the first by an Israeli leader in nearly a decade; Benjamin Netanyahu visited in 2011.

John Hannah, a senior fellow at the Jewish Institute for National Security of America, told JNS that over the past several decades, “few states have done more to base their national security on U.S. power, presence and credibility than the Arab states of the Gulf and Jordan.”

“An American failure on the scale of Afghanistan’s collapse, including the reckless abandonment of longstanding allies in the Afghan government and military, cannot help but send shudders through vulnerable U.S. partners in the Arab world and make them wonder what steps they need to take to make sure they don’t become the next victim of Washington’s headlong retreat from the Middle East and global leadership,” Hannah said.

Ironically, many observers point to former President Barack Obama’s own pursuit of the Iran nuclear deal in 2015 as planting the seeds for the Abraham Accords negotiated under former President Donald Trump. Arab allies of the U.S., afraid that the nuclear deal would be a windfall for Iran, turned to Israel as a result.

Daniel Pipes, president of the Middle East Forum, said, “The cataclysm in Afghanistan has two great implications for the outside world: the Taliban victory and the American defeat.”

“Counterintuitively, the Taliban’s triumph harms Islamism and even Islam because the Taliban represent such extremism that their success repulses many more Muslims than it attracts,” said Pipes, adding “The American defeat will benefit governments hostile to the United States, especially China but also Russia, Pakistan, and Iran, as U.S. allies hedge their bets.”

Hannah noted that as a result of the perception of American weakness in association with the Afghanistan debacle, different nations’ doubts will grow in regard to whether the U.S. will have their backs when times get tough. He said, “What hedging strategies will Middle East governments pursue? Appeasing an emboldened Iran? Pursuing greater ties with China and Russia? Secretly seeking their own nuclear deterrent?”