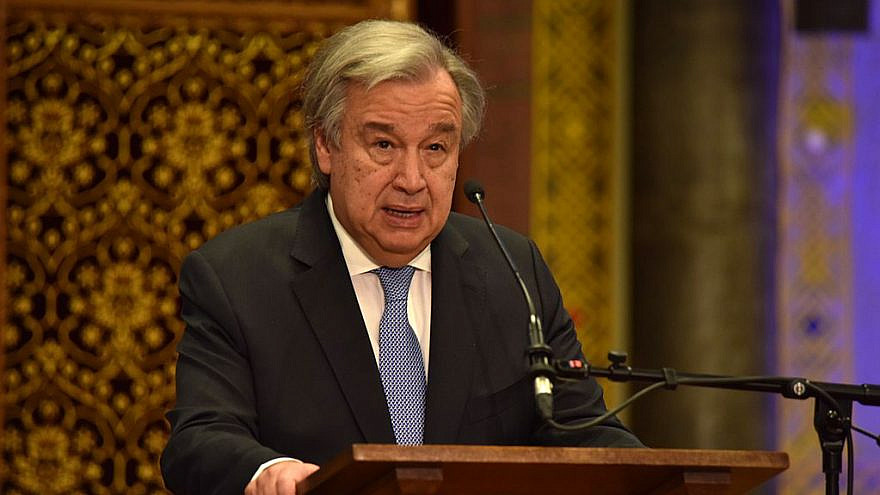 United Nations Secretary-General António Guterres on Tuesday called on the Biden administration to lift sanctions on Iran as stipulated by the 2015 nuclear accord signed between Iran and world powers.

In a report to the U.N. Security Council, Guterres also requested that the U.S. extend waivers on Iran’s oil trade and “nuclear non-proliferation projects,” Reuters reported. The Biden administration had extended those waivers for four months on March 31.

The U.S. under then-President Donald Trump pulled out of the JCPOA in May 2018 and re-imposed sanctions lifted by the accord. The Trump administration cited as its reason the agreement’s failure to adequately prevent future Iranian efforts to obtain nuclear weapons, address Iran’s ballistic missile program or its destabilizing actions in the Middle East.

“I continue to believe that a full restoration of the plan remains the best way to ensure that the nuclear program of the Islamic Republic of Iran remains exclusively peaceful,” said Guterres, according to the report.

In addition to re-imposing its own sanctions on Iran, in September 2020, the Trump administration clashed with other JCPOA signatories when it attempted to reimpose U.N. sanctions by triggering a “snapback mechanism.” France, Germany and the United Kingdom issued a joint statement saying that the U.S. had “ceased to be a participant” in the JCPOA as it had withdrawn and therefore its notification was “incapable of having any legal effect.”

Also on Tuesday, Israeli President Reuven Rivlin met with Guterres at the U.N. headquarters in New York as part of his farewell tour of the United States. During the meeting, Rivlin addressed anti-Israel bias in the U.N. and called for it to end. Rivlin is expected to end his 7-year term on July 9.

“Our region, the Middle East, needs trust between people. Peace between Israel and the Palestinians will never ever be achieved by anti-Israeli resolutions or investigation committees,” said Rivlin said.