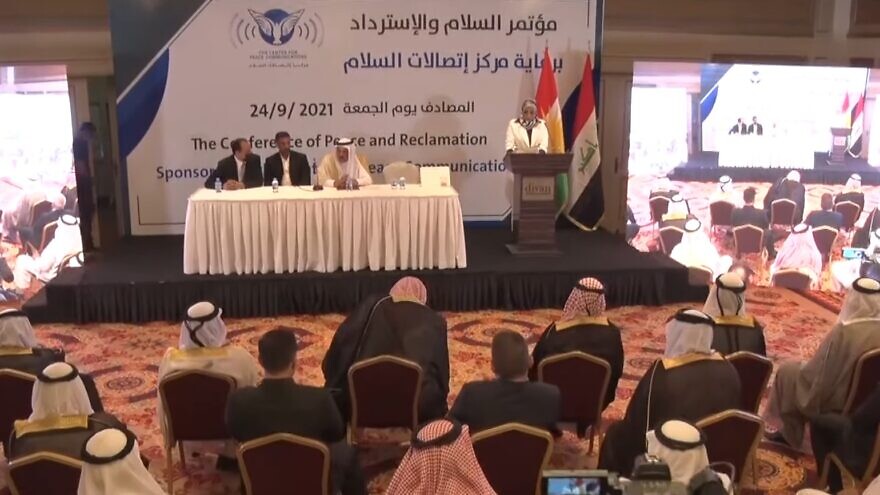 Those picking up The Wall Street Journal on Sept. 24 got some good news about the cause of peace in the Middle East. On its opinion page was an article by Sheikh Wisam Al-Harden, an influential tribal leader from Iraq’s Anbar province who has fought with the United States against both Al-Qaeda and ISIS. A member of the leadership of the crucial Sons of Iraq Awakening movement, the sheikh is a key leader of Sunni Arabs in his country. In the article, Al-Harden spoke of his attendance at a conference in Erbil, a city in the Kurdish region of Iraq in which he and 300 other notables publicly supported normalization between their country and the state of Israel

But the blowback about this development has provided a sobering counterpoint to optimism about peace between Jews and Arabs in the Middle East. By successfully intimidating some of those who attended the conference into recanting their positions, as was the case with Al-Harden, Iran and its powerful allies inside Iraq have once again shown that while it is possible to fight Jew-hatred in the Muslim world, no one should underestimate the difficulties of that struggle. That’s especially true so long as the Biden administration, to its shame, isn’t fully supportive of such efforts, as proved to be the case in Iraq.

The event, which was reportedly sponsored by a Brooklyn, N.Y.-based nonprofit called the Center for Peace Communications, had as its goal an effort to expand the circle of peace that was begun a year ago with the signing of the Abraham Accords in which the United Arab Emirates and Bahrain—with the open approval of Saudi Arabia—normalized relations with Israel. Later, Sudan and Morocco joined the agreement. The expectation at the time was that much of the Arab world also wanted in and would, with the proper prodding and help from the United States, further increase the number of nations embracing relations with the Jewish state.

In the wake of the 2020 election and the defeat of former President Donald Trump, who could point to the accords as a crowning achievement of his pro-Israel policies, the Biden administration was decidedly less enthusiastic about the effort. While careful not to disparage the treaties (which it insists on not referring to by the popular term “Abraham Accords”), the foreign-policy establishment that once heaped scorn on the very idea of such normalization efforts, is now back in charge in Washington. The administration knows that the Palestinians have no interest in peace or a two-state solution in which the Obama alumni that are running things again have such religious faith. But they are not that interested in helping Israel and the Arab states come together against Iran. That’s because they know this rapprochement is largely motivated by fear that the Democrats are abandoning them to their fate in favor of renewed efforts to appease Tehran.

It is in that context that the idea of a conference of Iraqis—citizens of a nation that not only has been a font of hatred for Israel since 1948 but is associated with a dark past of violent anti-Semitism in the 20th century—supporting normalization was so heartening.

Indeed, what was so wonderful about Al-Harden’s Journal article was his acknowledgment of the tragedy of Iraqi Jews, a 2,600-year-old community that numbered more than 100,000 persons, that was driven out of the country by anti-Semitic riots and hatred.

But as The New York Times reports, the backlash against the conference, which was attended by former U.S. State Department official Dennis Ross, was intense.

According to the Times, as news of the conference in Erbil spread, the overwhelmingly Sunni Anbar province issued arrest warrants for six of the participants. Others were fired from their government jobs. Pictures of the six—now wanted by the authorities for advocating peace with Israel—are now featured on huge banners erected at checkpoints between Anbar and Baghdad with the captions accusing them of “treason.”

Just as ominous was the way Al-Harden was intimidated by the Jew-haters. Reportedly, at the conference, he directly advocated Iraq joining the Abraham Accords and spoke of a desire for reconciliation between Jews and Arabs, especially in the light of the fate of Iraqi Jewry and its successful integration into Israeli society. He also warned of Iraq being reduced to a similar position as Lebanon, where Iranian auxiliaries have destroyed the country’s sovereignty and made it a puppet of Tehran.

But after being threatened for doing this and dismissed from his leadership position at the Awakening movement, Al-Harden completely recanted his position. The sheikh said he was deceived by the conference organizers and that he did not write the speech he gave at the conference or the Wall Street Journal article, claiming that since he does not read or write English, he had no idea what was being published in his own name.

The conference organizer, Joseph Braude, an Arabic-speaking American of Iraqi Jewish descent, insists that the sheikh understood everything that was in the article and his speech. Al-Harden’s son, who did not attend the conference but did drop his father off there, is also facing an arrest warrant if he returns to Anbar. Conference attendees are remaining in Erbil, which is part of the autonomous Kurdish region that broke away from Baghdad’s control decades ago. But they know if they go home, they may die.

Iran dominates much of Iraqi society in part because of the ties between Iraqi Shi’ites and Tehran, but also because Iran became immeasurably strengthened by America’s toppling of the Saddam Hussein regime, an unintended and unfortunate consequence of the 2003 invasion of the country.

As much as one might expect that Iran’s Iraqi allies would do their utmost to oppose the expansion of the Abraham Accords, the saddest and the most disgraceful aspect of this story is the reaction of the Biden administration. While Washington has largely remained silent about these events, it was telling that the one American statement about it demonstrated just how thoroughly Iran has also intimidated the United States.

The International Coalition for Operation Inherent Resolve—the U.S.-led force that has been fighting ISIS for eight years—did have something to say about the pro-normalization conference. In a tweet issued by the command’s spokesman, U.S. Army Col. Wayne Marotto, the force officially stated that it had been, “made aware of announcements … relating to the recent conference held in Erbil to discuss the normalization of ties with Israel. @Coalition had no prior knowledge of the event, nor do we have any affiliation with its participants.”

In other words, the U.S. military made it clear that its allies who had taken a stand in favor of peace with Israel were on their own. Rather than standing with the advocates of normalization, America was doing its best to appear indifferent to their fate even as other Iraqis, egged on by Iraq, were demanding their blood.

Can we expect courageous Iraqis to stand up to Iranian influence and anti-Semitism when even America won’t also do so? As JNS recently reported in an interview with a pro-normalization former Iraqi legislator who had to flee the country for his life, many Iraqis would like to join those working with Israel against Iran. But so long as the Biden administration treats this cause as if it were radioactive, advocacy for peace will remain a perilous choice.