Home Op-Eds Anti-Semitism is a form of delirium, especially in France 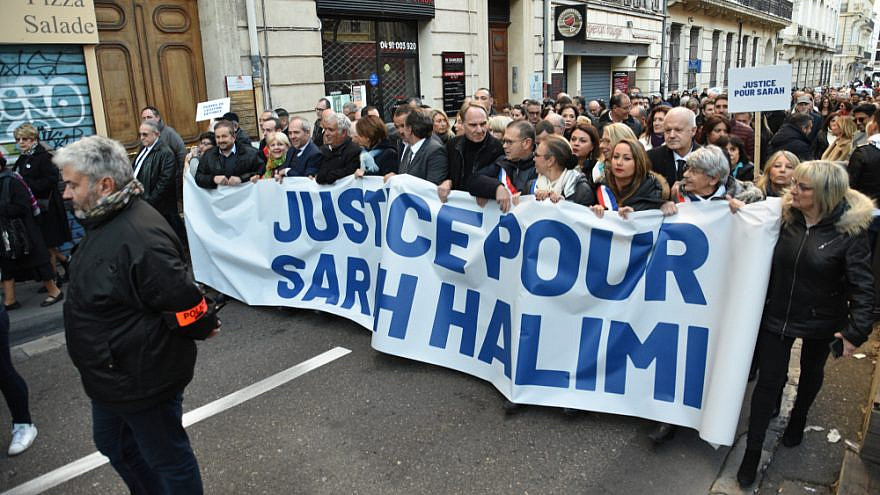 The latest shocking development in the scandal over a horrific anti-Semitic murder in France not only trains a harsh light on that country’s attitude to Jew-hatred. It also illuminates a deeply problematic and wider inability to deal with anti-Semitism in the West.

In 2017, a 65-year-old Jewish retired doctor and schoolteacher, Sarah Halimi, was murdered in a frenzied anti-Semitic attack in her Paris apartment.

Her next-door neighbor, Kobili Traoré, a 27-year-old Muslim man of Malian descent, beat her and threw her out of her third-floor window to cries of Allahu akbar, or “God is great,” and calling her a shaitan, or “satan.”

He had previously harassed Halimi’s daughter by calling her a “filthy Jew.” According to one psychiatric report, Traoré had been troubled by Jewish religious artifacts in Halimi’s apartment—her mezuzah and menorah, which “amplified the frantic outburst of hate.”

Under French law, said the Court of Cassation, “a person is not criminally responsible if suffering, at the time of the event, from psychic or neuro-psychic disturbance that has eliminated all discernment or control” over that person’s actions.

The ruling defies comprehension. Many murders and other serious crimes are committed by people under the influence of drugs or alcohol. Yet no one argues they are therefore not to be held responsible for their actions. As Francis Szpiner, one of the Halimi family’s lawyers, asked in outrage: “Will this also apply to drunk drivers who kill children on the road?”

By saying Traoré couldn’t be held responsible for killing Halimi, the court implied that she had been murdered in a random act of violence and that Traoré might have murdered anyone that night. But clearly, that wasn’t true. Traoré murdered Halimi because she was a Jew.

Daniel Zagury, a psychiatrist who examined him, pointed out that “society’s atmosphere and world events” always shape the particular form taken by delirious episodes. “Today, it is common to observe, during delirious episodes among subjects of the Muslim religion, an anti-Semitic theme: the Jew is on the side of evil, the evil one,” he wrote. “What is normally a prejudice turns into delirious hatred.”

This was what caused Traoré to murder Halimi. “The fact that she was Jewish immediately demonized her, and amplified his delusional experience … and caused the barbaric surge of which she was the unfortunate victim.”

In other words, the cannabis-induced psychosis did not by itself cause him to murder Sarah Halimi. He targeted her because of his hatred of Jews.

Indeed, even the appeal court had acknowledged that the killing was partly caused by his anti-Semitism. The inescapable message from the French courts is therefore that if anyone gets high on drugs, any anti-Semitic motive is somehow negated and they can kill a Jew with impunity.

Now French President Emmanuel Macron wants the law to be changed. Taking drugs and “going crazy,” he said, should not remove criminal responsibility. He also declared emotionally that French Jews had his support.

Such a declaration, however, rings very hollow. For the problem is not French law but France itself, where paralysis over dealing with Muslim violence against non-Muslims has made the authorities terrified of acknowledging its full nature and extent.

For years, French Jews have been subjected to repeated anti-Semitic attacks and murders overwhelmingly perpetrated by Muslims. Almost a year after Halimi was murdered, a Holocaust survivor, Mireille Knoll, was stabbed to death, set on fire and thrown out of the window of her Paris apartment by two men, one of whom claimed that the other shouted Allahu akbar as he stabbed her.

In 2012, an Islamist gunman, Mohammed Merah, shot dead three children and a teacher at a Jewish school in the southern city of Toulouse. In 2015, Amedy Coulibaly killed four Jewish customers at a kosher supermarket in Paris and declared he was murdering the people he hated most in the world: “the Jews and the French.” And there have been many more such attacks.

Yet as the writer Marc Weitzmann has observed, French authorities and commentators have repeatedly sought to obscure the anti-Jewish nature of these crimes, ascribing them instead to “lone wolf” attacks or the outcome of psychotic episodes.

Mohammed Merah, for example, has been widely portrayed in French media as a victim of prejudice, with his murders blamed on neo-colonial, anti-Muslim racism and discrimination. Yet during the siege leading to his eventual death, he had told police negotiators that he had been trained by jihadis in Waziristan. Fearing he would be seen as just “another crazy terrorist,” he had decided to “just kill soldiers and Jews.”

In 2006, a young Jewish man called Ilan Halimi (unrelated to Sarah) was kidnapped, tortured and murdered by a Muslim gang whose ringleader claimed that “all the Jews in the world are enemies.” The French police, however, rejected the idea that the murder was motivated by Jew-hatred and suggested instead that gang warfare was the cause.

When Sarah Halimi was murdered, the French authorities initially refused to classify this as an anti-Jewish attack. Indeed, it took two days before it was reported by the media at all.

And now the ruling by the Court of Cassation has also been barely reported outside the Jewish press and French media, although a few outlets cranked out a news story days after protests at their indifference were published by Jewish media watchdogs.

The reason for this indifference is obvious. The murder of Sarah Halimi and the attacks on other French Jews over the past few years tread heavily on some neuralgic left-wing toes.

To acknowledge that people in France are being repeatedly attacked and murdered simply because they are Jews destroys the all-important fiction that attacks on Jews are motivated principally by hostility to Israel.

To recognize the motivation for these French attacks means acknowledging something that the left refuses to say and punishes others for saying: that anti-Semitism is rooted in Islamic religion and culture.

One further aspect of the court’s ruling has a baleful significance well beyond French society. The court held that cannabis-induced delirium precludes an anti-Semitic motive because delirium wipes out an individual’s “discernment or control.”

But anti-Semitism is itself a form of delirium. Those in its grip are innately and inescapably delusional. They believe that the Jews possess diabolical and cosmic powers, that they are a secret conspiracy to control global affairs in their own malign interests, that they are responsible for all the ills in the world.

Does anyone seriously suggest that this is not a form of lunacy? Those in its grip cannot discern the reality of Jewish existence and as a result are sometimes unable to control their aggressive behavior towards Jews. Anti-Semites are fundamentally irrational.

And yet, whether dealing with the Iranian regime’s genocidal clerics who declare almost daily their hatred of the Jews or with the Nazi-worshipping Palestinian Authority leader Mahmoud Abbas, the West treats such delusional individuals as if they are rational actors. It refuses to acknowledge that anti-Semitism is itself the infallible marker of a deranged personality.

What the French courts have done is not merely to thwart the delivery of justice for a terrible murder. By stating in effect that anti-Semitism requires the “discernment and control” negated by delirium, they have also reinforced a far more widespread failure to understand the crucial point about anti-Semitism and so also reinforced the resulting failure by the West to stem its terrifying rise.