Home Op-Eds Can a Bennett-Lapid government rise to the challenges facing the Jewish state? 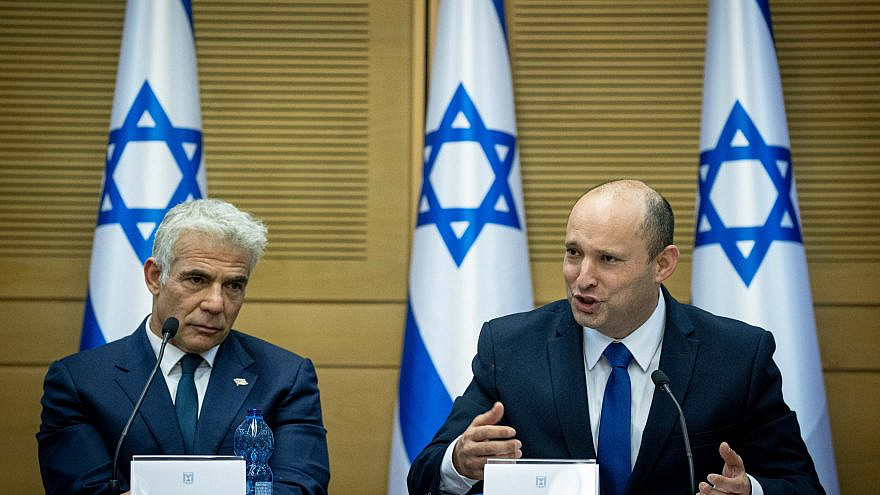 A nervous Prime Minister-designate Naftali Bennett struggled for nearly an hour to deliver what was supposed to be a 10-minute address at one of the most contentious gatherings of Israel’s Knesset in modern history. Bennett was forced to contend repeatedly with the shouts by a right-wing alliance that is now being sent to the backbenches of the opposition.

For many, the speech did little to encourage Israel’s public that a new government will successfully rise to the challenges facing the Jewish state. The incoming coalition includes every member of Israel’s left wing, as well as the Arab Ra’am party, a sister organization of Hamas. The coalition government, united only by their desire to remove Netanyahu from power, was sworn in without a Knesset majority, passing a first confidence motion by a single-vote margin of 60-59. The deciding vote, Emilie Moatti, a Knesset member from the Labor Party who suffers from a rare spinal condition that currently prevents her from standing or sitting upright, was brought to the Knesset on a stretcher from the hospital to deliver the deciding vote.

Bennett now takes Israel’s top job backed by only six mandates in the 120-member Knesset, while Netanyahu and his Likud Party head to the opposition with 30 mandates. The only reason that Bennett was afforded the privilege of standing at the podium was due to the desperation of Israel’s left to oust Netanyahu.

In order to gain a parliamentary majority in a country with an overwhelming right-wing electorate, the left needed to woo right-wing defectors. And there was no greater incentive to offer the right-wing Bennett than the chair of prime minister. It is doubtful that Bennett would have accepted any other offer to defect from Netanyahu’s right-wing alliance.

For Lapid, offering Bennett the opportunity to sit in the top job with barely 5 percent of the public’s support was obvious. Only Israel’s right-wing could topple Netanyahu. Without the defection of right-wing seats, the left would have remained hopelessly in the opposition.

A multifaceted campaign to unseat Netanyahu took years to manifest itself. The campaign was anchored by an incessant barrage of negativity from Israel’s media over the course of many years. That media is now celebrating Netanyahu’s downfall.

The next facet was a series of indictments on unprecedented corruption charges that included receiving gifts from longtime friends over many years without quid pro quo in return, and a pair of cases in which Netanyahu attempted to influence media coverage in his favor, even though there is little evidence that the media shifted accordingly. In the most serious of the cases, the prosecution has named more than 300 witnesses. The point of naming so many witnesses was to ensure that a trial would last for as long as it would take to whittle away public support.

The third facet was a coordinated effort by the opposition, the attorney general and Israel’s High Court to promote legislation and procedures that would make a continued rule for Netanyahu impossible. While Netanyahu succeeded on several occasions in thwarting the designs of this mini-coalition, the constant attempts that may still continue even with Netanyahu in the opposition made Netanyahu’s continued reign appear increasingly tenuous. The opposition is already discussing legislation to institute term limits, designed specifically to retroactively invalidate Netanyahu from returning to power.

But the straw that broke the camel’s back was a series of defections from the right-wing camp. When longtime Netanyahu ally and then-defense minister Avigdor Lieberman resigned his post, and essentially triggered new elections in November 2018, no one expected that he would refuse to join a Netanyahu-led government moving forward. Later, Gideon Sa’ar, a member of Likud who weakly challenged Netanyahu for the party leadership prior to a third election, broke off from the Likud Party together with a band of rebels to form the six-seat New Hope Party. Finally, it was Bennett who offered to bring his seven-seat party to join Sa’ar and Lieberman in backing Lapid.

For many of the defectors, it was broken promises or alleged mistreatment from Netanyahu that drove them to value sitting with Israel’s left-wing and an Arab party more than with the country’s largest political party.

Perhaps learning from his former employer—Bennett served as Netanyahu’s chief of staff the last time Netanyahu served in opposition—Bennett has recently broken several promises. He had repeatedly guaranteed voters that he would not sit with left-wing parties or Arab parties and committed himself to sit with the right-wing during the most recent election campaign. He went as far as to sign a paper that he held up to the cameras during a live evening news program pledging not to sit together with Lapid even in a rotation arrangement. Since the election, however, it has become clear that Bennett intended to sit with Lapid the entire time.

Yet that arrangement was only possible with the bare minimum votes Bennett was able to muster from a cheated right-wing voter base. Recent polls of Bennett’s own voters reveal that they do not support Bennett’s move. Those voters even preferred new elections to their own party leader emerging as prime minister. Even one of the Knesset members from Bennett’s own party, Amichai Chikly refused to vote in favor of the government taking Bennett’s already slim mandate down from seven seats to six.

As such, Bennett enters office with virtually zero electoral backing, a disenfranchised voter base and a major credibility problem. As for Bennett’s left-wing partners, the reality is that they may only like him as long as he remains a necessary ingredient to keep Netanyahu from the top office.

Meanwhile, a defiant Netanyahu, who could have recently pivoted into Israel’s ceremonial role as president or resigned to allow another member of his Likud Party to form a stable right-wing government, has vowed to torpedo the new government as head of the opposition. His obstinacy suggests that he will attempt to bring down the fragile Bennett-Lapid alliance, fully intent on returning to the seat he never wished to relinquish. Whether he will get to complete yet another political comeback remains to be seen.

If anyone believes that Israel’s political system will return to calmer days, they are likely mistaken. Israeli governments tend not to last to full terms even when coalitions are ideologically aligned. Now that Netanyahu is out of office, it is unclear what priorities will serve as the glue that holds the incoming government together.

The new government will face many tests on critical issues ranging from economy, security, diplomacy and key internal issues such as those relating to religion and state. In particular, Iran, Hezbollah, Hamas and the Palestinian Authority are likely to test Israel’s deterrence under a new regime.  The United States and the international community will test Israel’s diplomatic fortitude, and press the Jewish State to make concessions toward Palestinians, including a freeze on settlement building and the reopening of an American diplomatic mission to Palestinians based in Jerusalem.

An experienced Netanyahu-led government would have faced all the same tests. It is unclear how a government composed of all of Israel’s left-wing ideologues, and a temporary right-wing prime minister at their mercy will respond.

The Bennett-Lapid alliance has succeeded in its first mission of unseating Israel’s longest-serving prime minister. The public will soon see if it has the mettle, wisdom and skill to weather the challenges ahead. If not, Israelis may soon find themselves once again at the election booth in the not-too-distant future.