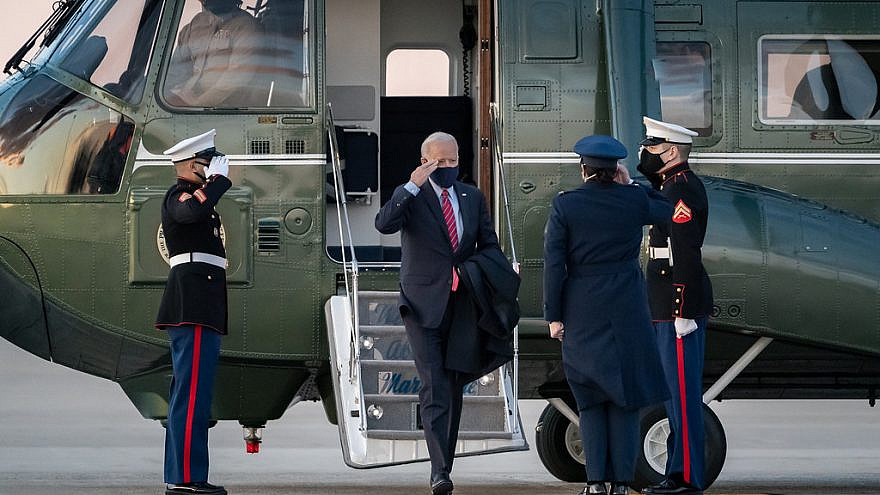 If, as a New York Times headline noted, Israel’s reaction to the news that the United States is ready to start talking with Iran was “muted,” there was good reason for the low-key reaction. U.S. Secretary of State Anthony Blinken’s announcement that the administration would work with its European allies to restore the 2015 Iran nuclear deal was a fulfillment of President Joe Biden’s campaign promises and therefore an inevitable consequence of the 2020 election results. Israeli Prime Minister Benjamin Netanyahu’s response was to merely restate his stand opposing Iran’s quest for nuclear weapons and a Western return to the flawed agreement.

But underneath the calm surface of relations between the two countries, which both governments are trying to claim is as close as ever in the wake of the much-delayed phone call from Biden to Netanyahu this week, is genuine anxiety. Blinken’s signal to Iran, preceded as it was by a declaration that the United States was formally withdrawing the demand made by the Trump administration that the U.N. snapback sanctions on Iran due to the violation of its commitments, made clear that the style of bargaining with Tehran that was followed by the Obama administration—in which virtually all major and minor figures in Biden’s foreign-policy team served—is now back in style. Which is to say that if Biden and Blinken are dealing with Iran, the flow of concessions is going in only one direction.

On its face, the prospect of America talking with Iran isn’t a problem.

The Trump administration spent four years trying to persuade and then pressure Iran into new talks about the nuclear issue, as well as Tehran’s illegal missile production, support of terrorism and regional adventurism. Contrary to the inclinations of some of the most hawkish voices on the issue in both countries, the aim of their “maximum pressure” campaign wasn’t regime change. It was to put the screws to Iran’s economy in the hope that the Islamist regime would realize that it was in its best interests to negotiate a new deal that would fix the problems with the one that Obama negotiated.

They have good reasons to be optimistic.

While the Biden administration has at times sounded much tougher-minded about its goals with respect to Iran, it has already demonstrated that it’s not likely to walk away from negotiations if it doesn’t get what it wants. Biden and Blinken know the real long-term problem isn’t restoring the nuclear agreement; it’s to forge a new one, just as Trump was trying to do. While they continue to insist that the pact Obama concluded was the best possible one that could have been made at the time, they realize that the sunset clauses Iran had insisted upon mean that they will expire by the end of this decade.

Six years ago, the moment when the already weak deal would expire seemed very far away. When Obama managed to evade the constitutional requirement that the deal be approved by two-thirds of the Senate—and got the pact confirmed by a backhand alternative method in which all it took was one-third pulse one of either House of Congress—critics tried in vain to point out the folly of leaving the job of dealing with the threat to future administrations. Instead, Obama’s false narrative, in which the only choices available to the United States were to embrace the deal or go to war, prevailed.

That’s why Biden and Blinken’s obsession with restoring the old deal rather than pushing ahead with one that would actually fix the problems Obama did not is so misguided.

That mistake is only compounded by the fact that Biden is already making concessions. Last week, the White House took only 24 hours to back off the president’s pledge—made on television during the Super Bowl pre-game programming—in which he said sanctions wouldn’t be lifted until the Iranians came back into compliance with the old deal. Now with Blinken declaring in advance of any talks that Washington is abandoning efforts to snap back the sanctions that, by rights, should already be in place due to the Iranians illegal nuclear activity, the pattern of negotiations that took place between 2013 and 2015 is returning.

In 2013, Iran was in a position similar to now. Sanctions had brought its economy to its knees, and it was forced to negotiate its nuclear future. But rather than pressing the advantage that the West had achieved, Obama and Kerry began to concede every point of their demands that sought to end Iran’s nuclear program. By the time the deal was concluded, the Americans had given up on virtually every key point—allowing Tehran to keep its nuclear program, advanced research and, most astonishingly, agreed that the deal would completely expire within 15 years, at which point the ayatollahs could have their bomb with Western acquiescence.

Iranian Foreign Minister Javad Zarif is hoping for the same sort of results. Given that most of the personnel behind that disgraceful Western surrender—Blinken, Wendy Sherman and Robert Malley, all people who see diplomacy as an end in of itself, rather than a means to a desired goal—are to be their counterparts in any future talks, who can blame them for thinking that the sky’s the limit when it comes to what they can get out of this feckless band of appeasers this time.

That means they are not only going to demand an end to sanctions to return to Obama’s terms, but will insist on avoiding future demands about a new deal with sunset clauses or anything about terror or missiles. If so, does anyone truly believe that Biden would be willing to forgo a pyrrhic victory in the form of compliance with the old deal in order to accomplish something that would actually avert the real danger in the now not-so-distant future?

At this point, Israel and its Arab allies, who are also fearful of what more U.S. empowerment and enrichment of Iran might mean for them, must wait to see if somehow the Biden team can grow a spine as opposed to fulfilling all of Tehran’s wishes again.

In the meantime, Iranian allies and auxiliaries in Gaza and Lebanon continue to pose a real threat of conflict in order in order to stop Israel from taking action against Iran or its proxies on its own. Hamas and Hezbollah also know that the Biden administration will, as Obama did, seek to restrain Israel rather than back it up in such confrontations, as Trump did.

Neither Congress, which is in the hands of Democratic majorities, nor the mainstream media, which remains dedicated to defending Biden, will seek to hold the president accountable if, like Obama, he sees accepting a deal at any price to be more expedient than actually defending American interests.

In 2021, kicking the can down the road on the nuclear issue is even a more dangerous policy than it was in 2015. Zarif is counting on Biden to hand him another easy triumph. While the die is not yet cast, there is little reason to believe that he will be disappointed.