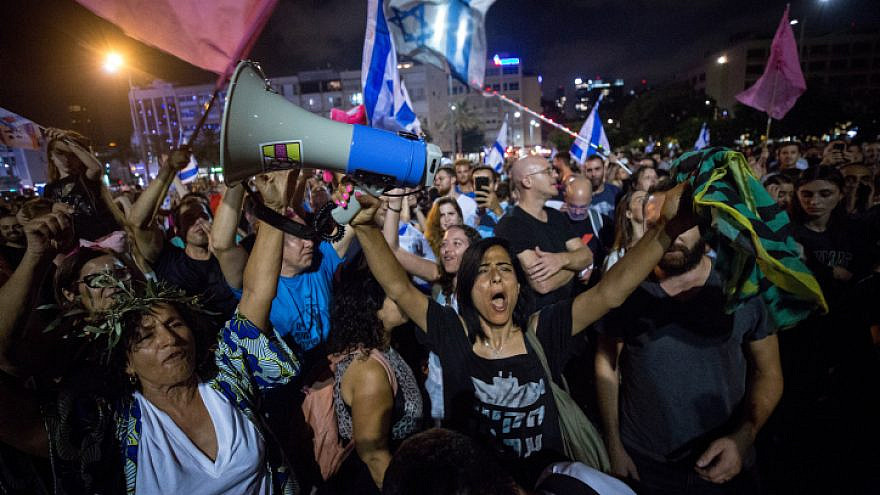 The sight on Sunday night of the trendy Tel Aviv set celebrating the new Israeli government with great fanfare—flags and all—was nothing short of hilarious. After all, one would have been hard-pressed to locate a single person in the throng of thousands dancing in and around the fountain at Rabin Square who had voted for Yamina, the party whose chairman had just been sworn in as the country’s next leader.

Indeed, ahead of the March 23 Knesset elections—the fourth round in two years—the munchkins chanting the equivalent of “Ding dong! The witch is dead” at the ousting of Benjamin (Bibi) Netanyahu would have shuddered with horror and disgust at having Naftali Bennett become prime minister.

Yes, in the eyes of the state’s chattering classes, the kipah-wearing Jew who made a fortune in high-tech exits was and still is a capitalist “fascist” bent on annexing Judea and Samaria at all costs. And Yamina (“Rightward”), in their view, was merely an iteration of Habayit Hayehudi (Jewish Home) and the Religious Zionist Party headed by Bezalel Smotrich, with far-right pariah Itamar Ben-Gvir  of Otzma Yehudit in its ranks.

A similar opinion was frequently expressed by the radical leaders of Labor (Merav Michaeli), Meretz (Nitzan Horowitz) and certainly by Mansour Abbas, leader of the Islamist Ra’am Party. Yesh Atid’s Yair Lapid and Blue and White’s Benny Gantz have less of an ideological stake in any of it, which is why they are referred to euphemistically as “centrists.”

Prior to the election and subsequent coalition-building attempts—first by Netanyahu and then Lapid—Bennett’s supporters were a different breed, save for a common thread in the plotline that Bibi had to go. In their minds, the longest-serving prime minister in Israel’s history wasn’t pursuing a sufficiently right-wing agenda.

Like Bennett, they argued that Netanyahu was too focused on staying in power, which caused him to abandon ideology in favor of political maneuvering. It’s an accusation that’s deservedly coming back to bite Bennett himself in the behind.

Opponents have been bemoaning the nature of the coalition that he finagled, consisting of a bunch of small, disparate parties. Detractors point to the unprecedented phenomenon of having the government headed by a party with a mere seven seats—six after Knesset member Amichai Chikli dropped out in protest over its leftward move.

Netanyahu’s Likud won a far greater number of seats (30) than any other individual party in the race. Even Lapid’s Yesh Atid garnered only 17. Many Likud supporters, thus, have been calling Bennett and the new government “fraudulent.”

Yamina enthusiasts are split. Some feel duped by Bennett for his broken promises. These include a vow not to join forces with Lapid and never to accept backing by Ra’am, let alone sit with it in a government.

Others are consoling themselves that at least their candidate will be prime minister for two years and lead a government that consists of a number of like-minded right-wingers. The people in this category, who wanted Bennett to replace Netanyahu, say that they’re willing to give him a chance. What they mean is that they’re hoping he won’t cave, where it counts, to the leftists and Islamists.

The latter seem to be assuming that he will, or at least are planning to bide their time until Lapid takes over in 2023 to get to work reversing Netanyahu’s policies. Despite their carry-on about his criminal charges, which are trumped up at best—and aside from their assertions that “most Israelis” voted against him—his successes are the bane of their existence far more than his failures.

The opposite is true of Bennett, who has been contending that he could do a better job than Bibi at implementing the ideas that they share. In other words, the difference between the two “anybody but Bibi” groups now occupying the same rows of Knesset benches is stark.

No wonder the public harbors little faith in the longevity of the so-called “change coalition.” But the left, whose la-la land ideas about Palestinian victimhood at the hands of Israeli “occupiers” have become so unpopular, appears to believe that the absence of Netanyahu and an administration in Washington anxious to return to the Iran deal are its ticket to resuscitation.

Boy, is it ever in for a surprise.

The irony lies in the thrill its members are exhibiting at having the likes of Bennett serve as their savior. Bets are on about how soon their literal and figurative parties will be over.

The Israeli electorate may have been divided for the past two-and-a-half years over Netanyahu’s continued rule after well more than a decade. But it’s been crystal-clear about where it stands on Iran, Hamas, BDS and the International Criminal Court, to name but a few issues liable to put a damper on the kumbaya coalition.

I, for one, pray that Bennett remembers and acts on this. If he does, a whole different crowd will be descending on Rabin Square and elsewhere to applaud. In the event that he doesn’t, the next election might just see Netanyahu return from opposition exile.