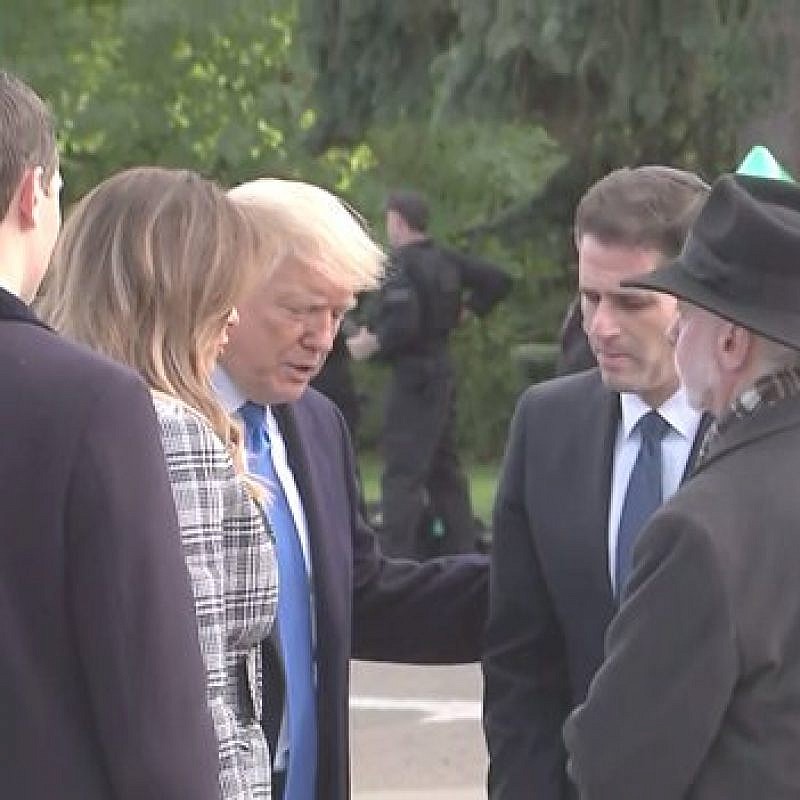 As Jews around the world grieve for those who were slaughtered in the Pittsburgh synagogue massacre, the reaction of many in both Jewish and non-Jewish circles has demonstrated a refusal to acknowledge the true significance of what happened.

Unforgivably, the attack was immediately politicized by those whose hatred of President Donald Trump effaced both decency and reason. Through his rhetoric on illegal immigrants and nationalism, he was accused of creating the toxic narrative that inspired the suspect, Robert Bowers, to commit the atrocity.

He is arguably the most philo-Semitic president America has ever had. His robust stance on immigration seeks merely to uphold the law to police America’s borders and avoid abusing the concept of citizenship.

He doesn’t want to exclude all Muslims, just those who pose a potential threat to America. And as he has said, his nationalism merely means he wants to privilege his country over the rest of the world. What national leader worth his or her salt would disagree?

Yet many on the left disgracefully equate nationalism, immigration control and measures against Islamization with white supremacism and belief in racial purity. They use the sly term “alt-right” to lump decent citizens who care about defending the integrity of the nation together with neo-Nazis and members of the Ku Klux Klan.

Nationalism has a bad name because it is identified with tyranny, bigotry and aggression. The two world wars are said to have been caused by nationalism. In fact, they were caused by aggressive imperialism: the desire to dominate or enslave other peoples.

Bigotry, paranoia, aggression, tyranny and imperialism are associated with any number of political, ideological or religious movements.

Moreover, the claim that nationalism produces anti-Semitism demonstrates a woeful inability or refusal to acknowledge what anti-Semitism actually is.

Bowers didn’t gun down the worshippers at the Tree of Life Shabbat service because he was “far right” or a nationalist or an anti-globalist. He himself made his motives absolutely clear. He simply wanted to kill Jews.

“All Jews must die,” he screamed as he mowed them down. Even when he arrived in the emergency room (to be treated by Jewish doctors) after his attack, he was shouting: “I want to kill all the Jews.”

In other words, he was motivated by unadulterated, crazed Jew-hatred. And yet dismayingly, Jew-hatred is precisely what so many blaming this on “nationalist” rhetoric fail to understand.

For across the world, most anti-Semitic attacks are currently mounted not by nationalists but by their opponents—religious fanatics from within the Muslim world and by the globalist left.

Yet many on the left refuse to acknowledge that Jew-hatred is endemic in their circles, even when it manifests itself in deranged theories about Jews conspiring to manipulate the world in their own interests, such as the belief that the West only went war in Iraq because of a conspiracy between Israel and Jewish neo-cons in Washington, D.C., pulling the strings of U.S. foreign policy.

In Britain, such conspiracy theories were swirling around the left long before anti-Semitism turned into such an issue in the Labour Party.

In European countries such as Sweden, the Netherlands or Germany, increasing attacks and harassment directed at Jewish communities have been largely shrugged aside. Even in France, where Jews have been savagely murdered simply because they are Jews, this lethal anti-Semitism achieves at best only passing attention.

Much of this silence on the left is due to their refusal to acknowledge that a grossly disproportionate number of anti-Semitic attacks, both verbal and physical, are being committed by Muslims.

One reason for this anti-Semitism denial is that it conflicts with the governing view that Israel’s behavior is the cause of anti-Jewish feeling. Anti-Semitism in Britain has been passed off as legitimate criticism of Israel. Muslims are said to attack Jews only because they are enraged by Israel—a rage that is shared by many in the West.

But no one can even try to claim that the Pittsburgh Jews were slaughtered in their very place of worship because of rage over Israel. The anti-Semitism deniers must therefore find another reason.

So they seek to explain the attack by saying the perpetrator was a member of the “far right” and influenced by political ideas such as nationalism. Anything to avoid facing the fact that Jew-hatred is simply just that.

For to acknowledge that fact would be to admit things that would shatter their view of themselves as wholly virtuous, and that the Muslims or Palestinians they support are always virtuous victims.

Those in the West who deny the true, metaphysical nature of anti-Semitism also fail to realize that it fuels the threat they themselves face from Islamist aggression. They think the Muslim world in general hates the Jews because it hates Israel, but they have this precisely the wrong way round. The Muslim world in general hates Israel because it hates the Jews—and much of the hatred of the West by radical Islamists arises from their conviction that the West is run by the Jews.

Blaming Israel is a way of blaming the Jews for anti-Semitism. People do this not just out of their own bigotry, but because they cannot acknowledge the unique and uniquely evil nature of the phenomenon.

They ask the question: Why are the Jews hated so much? And they conclude that the only possible explanation is that it must be the Jews’ own fault.

It is a tremendous mistake to assume that anti-Semitism arises from any political activity or ideology. It is a pathology based on the wish to exterminate the Jewish people—a moral and spiritual sickness unique in human history, and which morphs and mutates across religious, secular and political systems.

The continued existence of the Jewish people in the face of expulsion, exile and persecution defies rational explanation. Anti-Semitism is a never-ending evil that also defies reason.

But while the murdered Jews of Pittsburgh are mourned, the Jews remain the eternal people; and whether anti-Semitism comes from left, right or anywhere else, its diabolical goal will never be achieved.