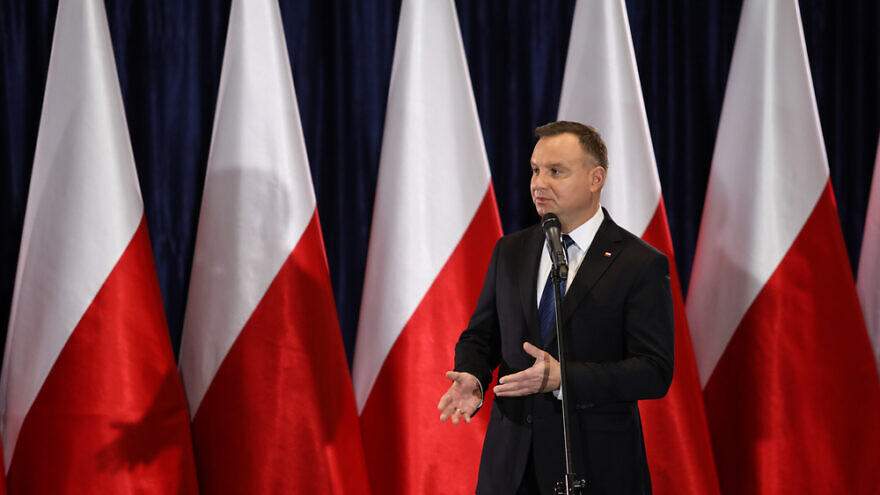 In her recent co-authored book Philo-Semitic Violence: Poland’s Jewish Past in New Polish Narratives, the Warsaw-based literary scholar Elzbieta Janicka recounts an episode from Poland’s past that sheds a great deal of light on Poland’s present. As brutal pogroms targeting the Jewish population swept through Poland in 1918, demonstrations calling for an end to the slaughter took place in London and New York. Among the banners on display: “We appeal to Great Britain to stop the butchery of Jews in Poland”; “We protest against the continued slaughter of innocent Jewish men, women and children in Poland”; “Poland, stop killing!”

These slogans caused great offense in Poland at the time. “The demonstrations were regarded as slandering of Poland, whereas the pogroms themselves were not firmly condemned by any important Polish group,” writes Janicka.

That concern with self-image—Janicka terms it a “fixation”—still persists. To suggest that there was or is anti-Semitism in Poland is, in the eyes of many Poles, far more troubling than the problem of anti-Semitism itself. And yet when I spoke last week to Janicka in the wake of the most brazenly anti-Semitic demonstration in Poland since the fall of communism more than 30 years ago, she pointed out that those native anti-Semitic traditions that outsiders call upon in order to supposedly “slander” Poland are unproblematically alive and well among nationalist groups.

The demonstration I’m referring to took place in the provincial city of Kalisz on Nov. 11: Polish independence day. Hundreds of far-right activists converged on the main square where they shouted bloodcurdling slogans, including “Death to the Jews!” “Death to the enemies of the fatherland!” and some stomach-churning calumny that linked the Jewish and LGBTQ communities with pedophiles.

The three ringleaders of the demonstration have since been arrested. Polish leaders forthrightly condemned the scenes in Kalisz, with President Andrzej Duda likening the demonstrators’ actions to “treason” and several members of parliament expressing an almost physical disgust. When the reaction to the demonstration in Kalisz is considered in full, it’s clear that these far-right nationalists do not speak for the majority of Polish citizens.

But is that the end of the debate? By any yardstick, it cannot be. An honest reckoning with the past is essential for the health of any democracy. Moreover, when governments start questioning the nature of the Holocaust as a catastrophe that engulfed the Jews most of all—as is the case in Poland, as well as Hungary, Ukraine, Lithuania and other countries in the post-communist east—that opens the door to more toxic currents from history that they then struggle to control.

During our conversation, Elzbieta Janicka highlighted two extremist organizations that were present at the Kalisz demonstration: The All-Polish Youth (MW) and the National Radical Camp (ONR). “The MW was reactivated in 1989 after the collapse of communism, while the ONR was legalized in 2012,” she explained. “Both organizations have an anti-Semitic and terrorist past. The MW existed in the inter-war republic [when Poland was independent between 1919 and 1939], while the openly fascist ONR was first created in 1934.”

Janicka argued that the adoption by these two organizations of their original names demonstrated a broader acceptance of far-right groups as legitimate elements of Polish politics. “In Germany, you have to change your name, at least,” she quipped. But the stigma against the far-right in Germany, at least in official circles, doesn’t exist in Poland, either in terms of the historical record or the contemporary stances taken by ultranationalist groups.

For more than a decade, Janicka pointed out, Nov. 11 has been an opportunity for the country’s far-right to organize a show of strength. As the extremists gathered in Kalisz, a larger number marched at the same time in Warsaw. If Poland’s government is serious about consigning these groups to the margins, it needs to recast independence day as an occasion for celebration and reflection, and decidedly not as an excuse for thuggish aggression against minority groups.

The government also needs to pay closer attention to the type of anti-Semitism that reared its head in Kalisz. Though some of the demonstrators reportedly brandished Palestinian flags, this was not the anti-Zionist anti-Semitism with which we are familiar in the West, which casts the State of Israel as the principal source of suffering and misery in the world. What we saw in Kalisz was the type of anti-Semitism that was familiar to our grandparents and great-grandparents, with Jews as the unambiguous targets of violent incitement.

There was, of course, no pogrom in Kalisz to accompany the Nov. 11 demonstration, perhaps because no numerically significant Jewish community lives there now, whereas there were more than 3 million Jews in pre-World War II Poland for the anti-Semites to pick on. But that fact should not provide an excess of comfort. The genocidal anti-Semitic ideology that evolved during the 19th and 20th centuries across Europe—and certainly not just in Poland—hasn’t been consigned to the history books. And for as long as history serves as a weapon of politics, it won’t be.