Home Op-Eds How Biden is smashing America’s moral compass and dragging the West behind... 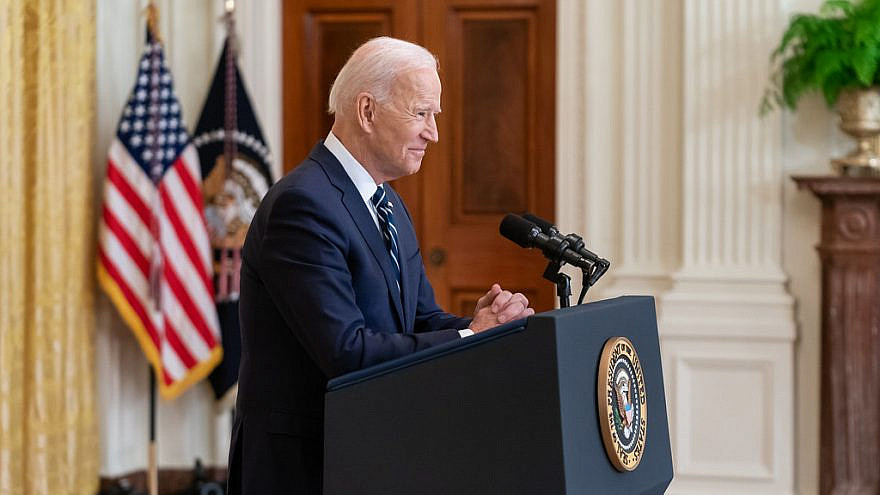 For eight years, the administration of former President Barack Obama behaved as if the security needs of the State of Israel were such an irritating impediment to American foreign-policy aims that it had no compunction in brutally swatting them aside.

As a result, the Obama years were very difficult for Israel. Appallingly, it looks as if the Biden years may be even worse.

Much concern has already been expressed about President Joe Biden’s posture of appeasement towards Iran, along with other moves such as his withdrawal of support from Saudi Arabia and his decision to cut and run from Afghanistan. This has thrown some of the world’s most dangerous places into a state of even more dangerous flux.

Until now, it was possible to believe that his administration was merely hopelessly naive, appeasement-minded or delusional as a consequence of its utopian liberal ideology, and that Israel just happened to be particularly vulnerable to its correspondingly bone-headed blundering in the Middle East. Now, however, there is evidence that the administration is driven by actual malevolence towards both Israel and Zionism itself, which lowers it into a pit of infamy fouler even than Obama’s hostility and disdain.

This was an eye-watering, anti-Israel, anti-Jew hate-fest, whose sole purpose was to demonize and delegitimize Israel under the Orwellian banner of “human rights,” and which erupted into openly Nazi-referenced anti-Semitism.

The notorious, forged handbook of deranged Jew-hatred, The Protocols of the Elders of Zion, was distributed to attendees. Leaflets saying Hitler should have finished “his job” circulated, along with fliers depicting him asking “What if I had won?” and receiving the answer: “There would be NO Israel and NO Palestinian bloodshed.”

Jewish participants feared for their safety as activists chanted “Zionism is racism, Israel is apartheid,” and “You have Palestinian blood on your hands.” The Jewish Centre in Durban was forced to close because of threats of violence.

The conference’s NGO Forum attacked every Jewish organization in attendance and passed a resolution calling Israel “a racist apartheid state,” guilty of the “systematic perpetration of racist crimes including war crimes, acts of genocide and ethnic cleansing … and state terror against the Palestinian people.”

The conference’s final declaration brought this verbal pogrom to its climax by excluding any denunciation of anti-Semitism and listing only the Palestinians as “victims of racism, racial discrimination, xenophobia and related intolerance.”

It thus singled out Israel alone as an instigator of those evils. The sheer lunacy of such a claim, identifying the Jewish state as so monstrous that it was in a category all of its own, placed that declaration itself squarely in the frame of classical anti-Semitism.

In 2011, the United Nations organized a meeting to celebrate the 10th anniversary of the Durban conference. The United States, along with thirteen other countries, boycotted it.

In a strong statement, the Obama White House explained that this was because the meeting would reaffirm in its entirety the 2001 Durban Declaration and Program of Action “which unfairly and unacceptably singled out Israel.” The United States, it said, “did not want to see the hateful and anti-Semitic displays of the 2001 Durban Conference commemorated.”

Durban 2001 indelibly marked the moral collapse of the United Nations. It was the point at which the “anti-racist” and “human rights” movement turned itself into a propulsive motor for anti-Semitism, serving as the launching pad for the campaign of demonization, delegitimization and destruction of Israel that has continued ever since.

The countries that in 2011 boycotted the Durban process held the line against this bigotry. That was then. Now, shockingly, the United States has obliterated that line. Last month, it reversed the Obama administration’s Durban position.

Having just rejoined the U.N. Human Rights Council, America promoted a statement of commitment to combat racism, racial discrimination, xenophobia and related intolerance linked to “recalling the 20th anniversary of the adoption of the Durban Declaration and Program of Action.”

Obama had repudiated this declaration on the grounds of its unjust demonization of Israel and the “hateful and anti-Semitic displays” around its creation. The Biden administration has embraced it.

Now there is to be a yet further attempt to re-weaponize Durban. In September, the United Nations plans to hold a 20th-anniversary meeting where the original declaration will be reconfirmed.

As the blogger “Elder of Zion” has observed, given America’s endorsement of Durban at the Human Rights Council, it’s entirely possible that the Biden administration will attend the September meeting—and thus associate the United States with what the Obama White House condemned as a commemoration of the “hateful and anti-Semitic displays of the 2001 Durban Conference.”

Shocking as all this is, it makes perfect sense in light of the Democrats’ embrace of intersectionality and identity politics. Intersectionality holds that Jews and the State of Israel are “white privileged” oppressors (even though most Israeli Jews are brown-skinned, coming from regions of the Middle East).

According to this dogma, Israel can’t be the victim of Iran or the Palestinian Arabs (although it indubitably is), and no people of color can be anti-Semites (which some indubitably are).

Proponents of intersectionality view only white people as a threat. This is now the view of the Biden administration. In his address on Wednesday night to Congress, Biden said, according to the prepared text on the White House website (when he actually delivered the speech, he managed to mangle his words): “The most lethal terrorist threat to the homeland today is from white supremacist terrorism.”

He made similar remarks in February when he said white supremacists were “the most dangerous people in America,” calling them “demented.”

But he doesn’t think those Palestinian preachers and officials who say things like the Jews are “thirsty for blood to please their god” or that the Jews were forced out of Europe in the past because of the threat posed by their “evil nature” are demented. He doesn’t think the Iranian leaders who deny the Holocaust, allege a Jewish conspiracy to replace Islam by Western imperialism and claim Jews seek to dominate the entire world are demented.

Instead, he treats the Iranians as rational actors with whom he wants to negotiate and into whose terrorist activities he intends to help funnel billions of dollars. And instead of acknowledging the Palestinians’ exterminatory anti-Semitism as demonstrating “racism, xenophobia and related intolerance,” he declares them to be the principal victims of such attitudes.

When Britain’s Labour Party was in the grip of its hard-left, anti-Israel and anti-Semitism-promoting leader Jeremy Corbyn, there were Americans who took comfort in the belief that such a development couldn’t happen in their own country. In fact, the Biden administration is even more baleful.

Whether Biden is too mentally fragile to grasp what he’s doing or whether he has made a cynical calculation of where his interests lie in today’s increasingly radical Democratic Party, it would seem that there’s a puppet of the hard left in the Oval Office.

And it’s not just America and Israel which are likely to feel the impact of this.

When the United States boycotted the 2011 Durban meeting, so did many other nations besides Israel. Now the reverse has happened. Every other nation that boycotted Durban 2011 signed the U.S.-led Human Rights Council statement supporting the original Durban Declaration.

The demonization of Israel has helped smash the cultural moral compass of the West. Now America is smashing its moral compass in politics, too—and as a result, is dragging the rest of the so-called civilized world behind it, to the potential endangerment of all.