Home Op-Eds How many American Jews are there, and does it really matter? 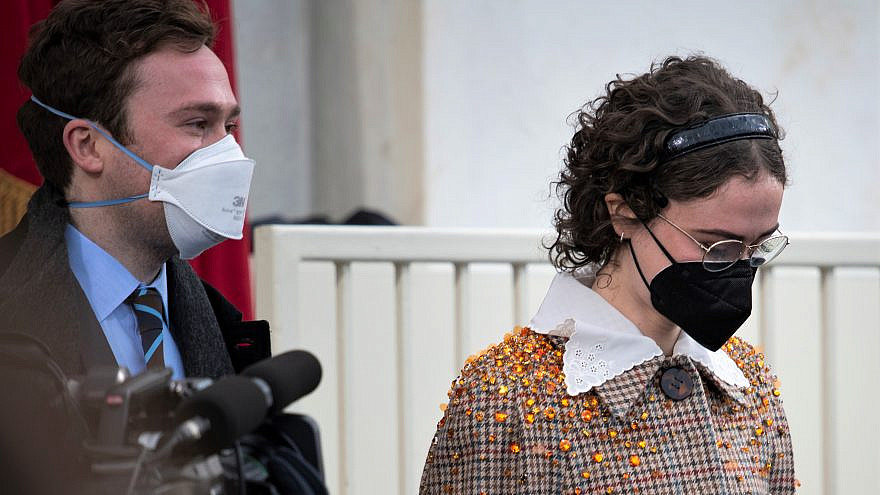 This past weekend, the White House Passover seder was hosted by America’s Second Gentleman Doug Emhoff. The Brooklyn, N.Y.-born lawyer is the first Jew to be a spouse of a vice president, as well as the first male to occupy the role. Being a Jew in such an important place in American society is not quite as big a deal as it might have been in previous eras when most Jews were either immigrants or first-generation Americans. Nonetheless, Emhoff has become a symbol of the acceptance of a community that was once marginalized.

The same might also be true for his children, who call his wife, Vice President Kamala Harris, their “Momala,” though it’s not clear whether that was intended as a Yiddishism or simply an affectionate term that rhymes with her first name, despite the fact that some publications seized on it as a way of selling Harris to the Jewish community. But 21-year-old Ella Emhoff, who introduced Harris at the virtual Democratic National Convention last summer by using that affectionate term, apparently doesn’t consider herself Jewish. We learned that when The Forward sought an interview with her and were politely brushed off when a spokesman for the 21-year-old bluntly told a reporter that “Ella is not Jewish.”

While Ella Emhoff and her older brother, Cole, 26, understand that they now live in a fishbowl that inevitably involves having to deal with the press, she wanted no part of the paper’s desire to include her in the “Forward 50” list of Jewish celebrities.

Her spokesman explained it this way.

It is very much to Ms. Emhoff’s credit that she was unwilling to pretend to embrace Jewish identity for some good press for her stepmother. Having grown up as the daughter of a Jewish father and non-Jewish mother in a household where Judaism wasn’t observed, the notion of being a community role model rightly struck her as absurd.

But according to the latest estimate of the Jewish population of the United States, she might actually be considered Jewish. Is that right? A lot rides on the answer to that question.

It was difficult not to think about Ella Emhoff when reading Brandeis University’s American Jewish Population Estimates 2020 published earlier this month. The work, which is based on 30 different local demographic studies of Jewish communities as well as the landmark 2013 Pew Research Institute’s “Portrait of Jewish Americans,” contains some interesting tidbits.

It’s not exactly shocking to learn from the Brandeis study that American Jews are older, better-educated and more likely to live in an urban setting than non-Jews. It’s equally unsurprising that those areas where the Jewish population skews much younger are places where there are heavy concentrations of Orthodox and non-Orthodox Jews. But other elements of the document are likely to generate a spirited debate. The most important one is the most basic: How many Jews are there, and who is counted as such at a time when identity is fluid, and affiliation and faith remain on the downswing for those who categorize themselves as Jewish in one way or the other.

Brandeis asserts that 7.6 million Jews currently live in the United States. Of those, 4.9 million are adults who identify as Jewish. It also counts another 1.2 million adults who either claim to be “partially” Jewish or fall into a category that Pew called “Jews of no religion,” which is to say that they do not identify as being Jewish, but have some direct Jewish connections and don’t identify as members of another faith. It also counts 1.2 million Jewish children, including anyone with at least one Jewish parent who is being “raised as a Jew in any way,” though that requirement is so loosely defined as to be meaningless.

Another demographer, Sergio DellaPergola of Hebrew University, disagrees. In his article on “World Jewish Population” in the 2019 American Jewish Yearbook, DellaPergola came up with a much lower number for American Jews. He excluded those who called themselves “partially” Jewish and said the “core” Jewish population was 5.7 million, a finding that the Brandeis study rejects as mistaken.

This sounds like a boring statistical debate that could only interest demographers. Still, if those in charge of communal institutions are counting Ella Emhoff and the many other people who, like her, have some Jewish connections but don’t consider themselves Jewish, then it is directly relevant not only to funding priorities, but is also a commentary on the state of American Jewish identity.

This is a product of the changing demographics of American Jewry. As the Pew study noted, with the rate of intermarriage among the approximately 90 percent of Jews who are not Orthodox now more than 70 percent, assumptions about who should be considered as Jewish are inevitably on shaky ground.

In an era when the number of those who are “Jews of no religion” is rising, understanding how to reach the population of people who do not observe Judaism but who might feel some sort of connection with Jewish identity is of vital importance. As such, it’s understandable that many demographers, like Jewish communal leaders, are eager to frame the community in as inclusive a manner as possible.

That’s in part because many children of intermarriage are receiving some Jewish education and being raised in homes where Judaism is observed. It also represents a desire not to write off those who are being raised with both religions being acknowledged in the home as not Jewish. Yet as the author of a New York Times op-ed about “saying goodbye to Hanukkah” noted in December, being the child or grandchild of Jews with only loose cultural connections to Jewish identity simply does not a Jew make.

The Pew data recorded a marked decline in interest in those aspects of Jewish life that are integral to passing on identity to subsequent generations. Merely liking lox and bagels, and having a feeling that social justice is an important cause, cannot sustain Jewish identity. A sense of Jewish peoplehood isn’t likely to survive in the absence of active involvement in religion or engagement with Israel, let alone without some form of Jewish education.

Of course, that isn’t what many in the Jewish community want to hear. Some see the “Jews of no religion” group as justifying a new way of thinking that de-emphasizes traditional institutions like synagogues, schools and camps, as well as Zionism. Instead, it reflects a more loosely defined notion of Jewish life that is both more amenable to the universalist instincts of the non-affiliated and to their liberal political sensibilities.

For a generation, the Jewish world has struggled to balance an emphasis on outreach and inclusion while allocating sufficient resources to sustain institutions that are vital to maintaining a core Jewish community. There’s no reason—other than shrinking resources—why both can’t be done. But the debate about allocating those increasingly scarce Jewish funds is inevitably going to be influenced by the way we count Jews. Outreach is vital, and no one who might one day be inspired to connect to Jewish life should be turned away. But so long as we are counting people with no real sense of Jewish identity or peoplehood as Jews, we’re skewing that conversation.

The argument about demographics may make it less likely that communities will devote themselves to reinforcing those who embrace their identity. Those seeking to raise Jewish families at a time when assimilation is such a powerful force should be a priority for the organized Jewish world. Seen from that perspective, counting individuals like Ella Emhoff who are ambivalent on the subject or who actually say they are not Jewish matters a great deal.