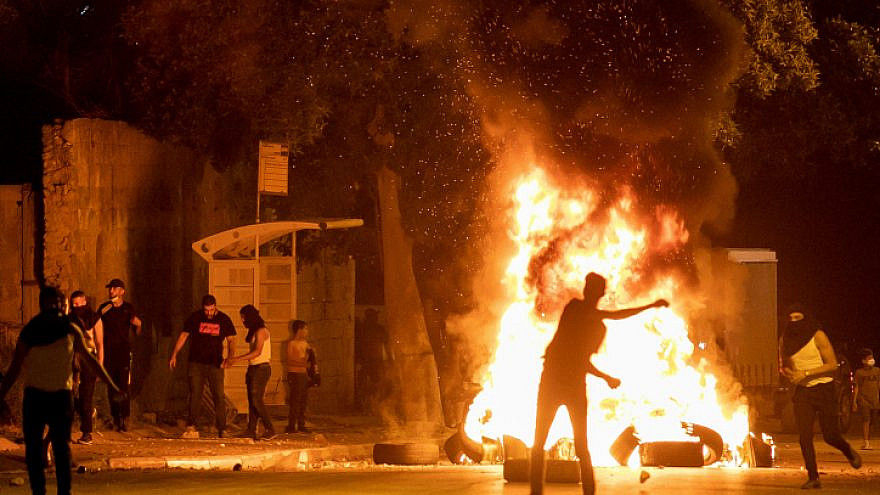 After one of the calmest extended periods in decades in the Middle East—and in Israel, in particular—the tide has suddenly turned, reverting to classic political mistakes that have all but erased the positive gains.

The last four years had been a relative period of quiet in Israel. Straightforward policies from the Trump administration were clear: Israel was a source of peace and the strong horse to bet on when it comes to regional stability. Palestinians, on the other hand, were continuing to incite their population to violence in public speeches, on television, in textbooks and on social media. Worse, the Palestinian Authority itself was continuing to pay monthly “pay for slay” stipends to terrorists sitting in Israeli jails and the families of so-called martyrs killed in the act of committing acts of terror against Israelis.

Israel was rewarded accordingly. The United States officially recognized Jerusalem as the capital of Israel—long considered to be a “final-status issue” in the ongoing conflict with Palestinians. America’s embassy to Israel was officially moved to Jerusalem, in accordance with the repeatedly delayed congressional Jerusalem Embassy Act of 1995.

Palestinians suffered the consequences. The Taylor Force Act prohibited the United States from sending direct aid to the Palestinian Authority as long as pay-for-slay payments for terrorists remained on the books. The P.A. was isolated from contacts with the United States. The PLO Mission in Washington was expelled.

In December of 2016, just before the Obama administration left office, they offered their parting shot to Israel: passage of U.N. Resolution 2334, calling suburban housing in the biblical counties of Judea and Samaria “a flagrant violation of international law.” At the time, Israel accused the United States not only of allowing the resolution’s passage by refusing to assert a veto, but of contributing to its authoring, as well as conspiring to have the resolution advanced by other nations.

The Trump administration put a hard stop to the anti-Israel behavior. Secretary of State Mike Pompeo reversed a long-held U.S. position on settlements, claiming that the Jewish housing was not inherently illegal or an obstacle to peace. Further, the Trump administration defunded U.N. agencies such as UNRWA, which continues to be accused of including direct incitement to violence in school textbooks, and UNESCO, which has been attempting to eradicate Israeli connections to Judaism’s holiest spots.

U.N. member nations understood that bringing forward anti-Israel resolutions would meet sharp condemnation and vetoes. Further, the world body itself was fearful that it would lose future funding from its largest benefactor: the U.S. government.

America applied the same strategy to Iran as well. Rather than flush the world’s largest state sponsor of terror with cash, as the Obama administration did in 2015 with the $150 billion Iran nuclear deal, the Trump administration withdrew from it and began leveling the harshest sanctions ever recorded by the United States against any other country.

Collectively, the messages were clear: A threat to Israel, diplomatic or security-wise, was tantamount to an offense against the United States. And the United States would use its economic might to punish bad behavior.

On the flip side, the United States would use its economic might to reward good behavior. The strategy bore fruit with the signing of the Abraham Accords: separate normalization agreements between Israel and the United Arab Emirates, Bahrain, Sudan and Morocco.

These strategies represented unmistakable successes. For the first, Palestinian actors could see that malign behavior—incitement to terrorism and terror financing—would be punished; attempts to isolate Israel diplomatically in international forums would fail; and normalizing relations with Israel could yield billions of dollars in economic benefits.

It appeared as though Palestinians on the street were getting the message.

Terrorism ground to a halt, as for the first time the full extent of economic possibilities alongside Israel was being genuinely considered. While Israeli-Palestinian peace was not imminent and years of distrust still needed to be repaired, peace felt closer than it had at any point since the signing of the infamous Oslo Accords.

The Trump policies represented a significant departure from those of previous administrations, which angered much of the traditional diplomatic establishment, which had little to show for decades of failed policies. In an effort to save face, those responsible for the Obama administration’s policies were back-channeling—as they did with the Islamic Republic—telling Palestinian leaders that the best strategy was simply to wait out the clock on the Trump administration.

The United States has sought ways to bypass the Taylor Force Act, doling out large payments to NGOs, which, while not official organs of the P.A., work hand in fist with its leadership. UNRWA has been refunded. The language of U.N. Resolution 2334 has returned, with U.N. Secretary-General António Guterres once again referring to settlements as “flagrant violations of international law.” The building of apartments in decades-old Jerusalem neighborhoods, such as Har Homa, has been condemned.

Worse yet, the United States pushed P.A. strongman Mahmoud Abbas to hold an election while on his continued rule. Abbas, who came to power in 2006 following PLO leader Yasser Arafat, is currently in the 14th year of a four-year term at the head of an unpopular Palestinian kleptocracy.

The unexpected call for a vote suddenly elevated the leadership possibilities for some of the region’s worst actors, including the Hamas terror movement and an alternative Fatah leadership led by jailed terrorist mastermind Marwan Barghouti, who is serving five consecutive life sentences in Israeli prison.

A period of collective calm was suddenly replaced by efforts to demonstrate which party was the greatest defender of Al-Aqsa and would lead the Palestinian cause against so-called Israeli aggressions. Simultaneously power plays among Hamas’s factions in the isolated Gaza Strip have compounded the situation.

Terror incitement has suddenly grown to unconscionable levels, particularly on television and social media, with Palestinians referring to renewed terrorism as a “TikTok intifada.” For the past two months, Israel has been forced to contend with violent riots, terror attacks and rocket fire.

Now, “both sides” are being called on to “reduce hostilities.”

Compounding matters is the worst political crisis Israel has faced in decades. For the past three years, embattled right-wing Prime Minister Benjamin Netanyahu has governed at the head of transitional governments with limited powers—unstable alignments of parties attempting to destroy one another as opposed to working together.

For the fourth time a little more than two years, Netanyahu is barely a few mandates short of a majority coalition with his ideologically aligned partners. Opposition leader and left-wing ideologue Yair Lapid currently holds the mandate to form a government after a recent inconclusive election. He, too, would require the assistance of right-wing parties, as well as self-described anti-Zionist Arab parties.

Barely one step away from being out of office and running a transitional government, Netanyahu may not have the political backing to fully restore quiet. Such an operation would require many days or weeks, and would likely leave much of Gaza in tatters.

It can be argued that aside from enjoying the quiet with Palestinians and laying the groundwork for peace in the greater region with the signing of the Abraham Accords that Netanyahu could have done much more to move the dial while Trump was in office.

Now, Israelis and Palestinians will suffer the consequences of shifting back to the old, failed policies of the past, and are likely to descend into a new era of chaos instead of a hopeful era of opportunity.