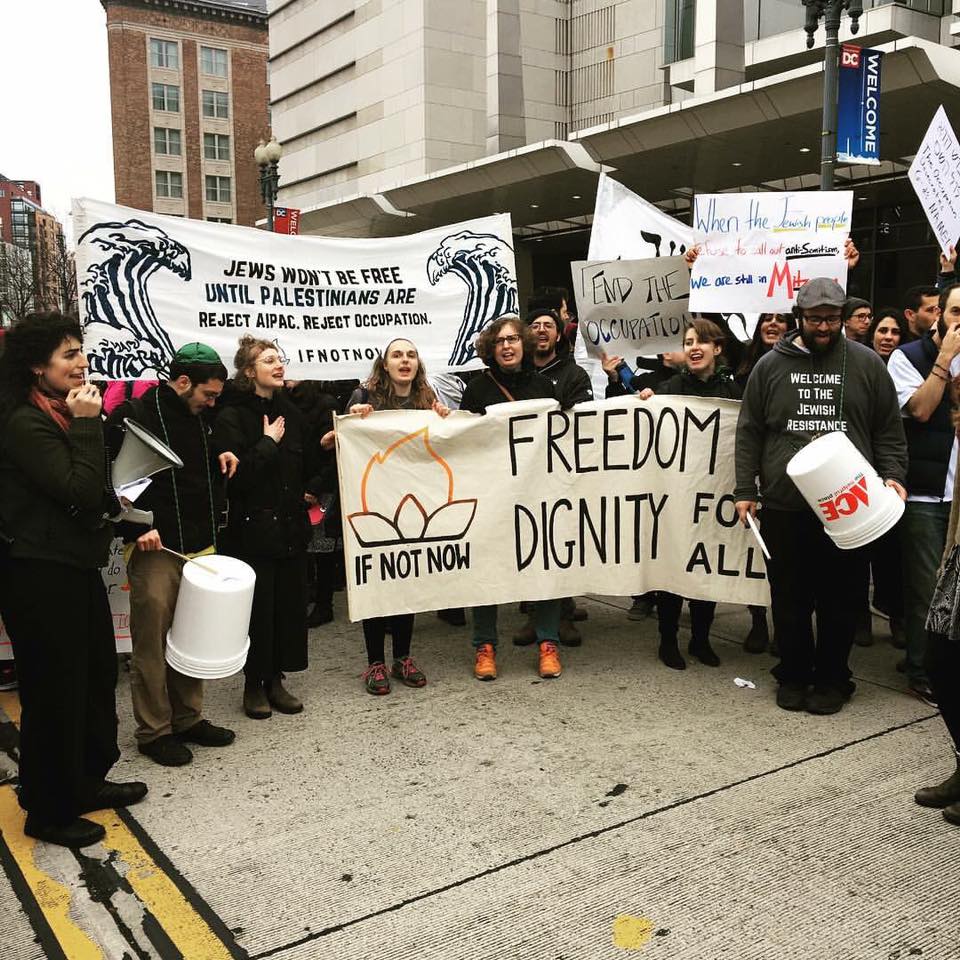 The self-proclaimed Jewish-American “progressive” organization IfNotNow hosted a discussion on Jan. 27 about “how the IHRA definition of anti-Semitism has been destroying the progressive movement.” The word “discussion,” may, in fact, be too generous a term for what was, in reality, a diatribe of misinformation.

An address by Taher Herzallah, associate director of outreach and grassroots organizing for American Muslims for Palestine (AMP), took up much of the event. It should be noted right away that AMP’s platforms disseminate anti-Jewish propaganda. Articles on its website complain about “Jews … illegally colonizing the occupied territories” and “Zionist Jews” who have the gall to regard Jerusalem as the undivided capital of the Jewish state. Appallingly, a video posted to AMP’s Facebook page commemorating “Nakba Day” falsely presents a picture of Holocaust victims as Palestinian victims of Israeli violence (the picture in question is displayed at 1:25 in the video). IfNotNow has partnered with AMP in the past.

Herzallah has hardly shied away from hatred himself. At a 2014 AMP conference, he reportedly claimed: “Israelis have to be bombed; they are a threat to the legitimacy of Palestine, and it is wrong to maintain the State of Israel.” That same year, AMP hosted a fundraiser dinner in honor of Rasmea Odeh, a convicted terrorist directly responsible for the deaths of two civilians in a 1969 grocery-store bombing in Jerusalem. IfNotNow may purport to “stand up for the freedom and dignity for all Israelis and Palestinians,” but its embrace of AMP suggests otherwise.

The rhetoric spouted by Herzallah during this event is of equal concern. He egregiously asserted that “people like [him] … had to pay the price” for the Holocaust—an obvious attempt to appropriate the trauma of the victims of Nazi genocide on International Holocaust Remembrance Day, no less. He even dismissed the well-documented alliance between “certain Palestinian leaders” and the Nazi regime as part of a “myth” before later insisting that “we want to question the existence of the State of Israel itself.” This questioning, he urged, “should not be off the table.”

But that, of course, is the entire point: The IHRA working definition—no matter how much its opponents argue otherwise—does not impinge on the rights of free speech. The IHRA website even describes the definition as “non-legally binding” and specifies that “criticism of Israel similar to that leveled against any other country cannot be regarded as anti-Semitic.”

Astoundingly, this didn’t stop the event’s speakers from falsely asserting on multiple occasions that the IHRA definition and its advocates aim to “criminalize” the BDS movement that targets Israel. Indeed, this strawman argument was a recurring theme; one speaker’s presentation even featured a slide that insisted that the definition “has been used to,” among other things, “squash free speech.” The slide provided no examples to back up the claims, although a speaker did at one point decry the Trump administration’s 2019 executive order affording Jews protections under Title VI of the Civil Rights Act as an attack on freedoms.

Such fears are unfounded. The order clarifies that those enforcing Title VI should consider the IHRA definition when “identifying evidence of discrimination based on race, color or national origin” (emphasis added) and “not diminish or infringe upon any right protected under Federal law or under the First Amendment.” As the Anti-Defamation League has explained, “Under the order, criticism of Israel may be considered protected speech, but the line must be drawn when such expression becomes intentional, unlawful, discriminatory intimidation and harassment.”

Speakers, including an activist with the U.K.-based IfNotNow-equivalent Na’amod, expressed similar concerns regarding British domestic politics. The approach was equally distorted. At multiple institutions, including the University of Cambridge, the adoption of the IHRA definition has been accompanied by explicit affirmations of the commitment to freedom of speech and inquiry. Even Page 16 of the “Legal Guide for Palestine Solidarity Student Activists” itself acknowledges that there is no known case of any university directly citing the IHRA definition to close down an event that is legitimately critical of Israel and is therefore not anti-Semitic in the proper sense of manifesting hatred, discrimination or prejudice towards Jewish people.

Moreover, British law has never provided a right to freedom of expression akin to the First Amendment. The Human Rights Act (1998), the Communications Act (2008) and the Public Order Act (1986), just to name a few, all provide extensive limits on freedom of expression for a number of purposes, including criminalizing forms of racial and religious discrimination.

However, it’s clear that what IfNotNow and its allies really fear is the potential to “use” the IHRA definition to silence pro-Palestinian advocacy or anti-Zionist speech. During his speech, Herzallah alleged that government affairs director of the Simon Wiesenthal Center, Mark Weitzman, helped draft the definition exclusively to silence the BDS movement and criticism of Israel. But just because a definition of bigotry can be misused to silence speech doesn’t mean the definition itself is wrong. Any attempt to define bigotry, whether or not it involves Israel, is an attempt to marginalize certain hateful ideas and expressions.

For IfNotNow and its allies, the IHRA definition’s acknowledgment of the connection between anti-Zionism and anti-Semitism likely hits too close to home, hence their crusade to smear it by any means necessary. Prominent Jewish organizations that publicly support the IHRA definition were not even spared IfNotNow’s ire during the event—their efforts to stand up for Israel and Jewish college students slurred as “out of step with reality” and a distraction from the fight against right-wing anti-Semitism (as if countering anti-Semitism is a zero-sum game). It was even suggested that longtime ADL national director Abe Foxman and renowned Holocaust scholar Deborah Lipstadt are “confused about what anti-Semitism is [and] where it comes from,” a particularly rich accusation from an organization that has accused an American congressman of “pandering to Jews” and that vows to “defeat” the “Jewish establishment.”

All who value the safety, security and prosperity of Israel should recognize that the widespread campaign against the IHRA definition is merely the latest development in the ideological war against the country’s right to exist. Because the definition affirms that advocacy for stripping the Jewish people of self-determination is anti-Semitic, proponents of this discriminatory goal counter by dishonestly presenting their ideas as a fight for justice. In the process, they denounce the “criminalization of BDS” that doesn’t exist and slander Jewish organizations astute enough to recognize that the demonization of Israel too often leads to the demonization of Jews.

We should not let these dangerous efforts go unchallenged.