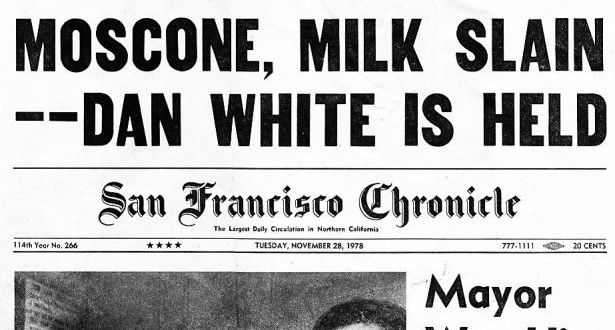 Four decades ago, when she was president of the San Francisco Board of Supervisors, Dianne Feinstein stumbled onto a crime scene down the hall from her City Hall office. She discovered the body of city Supervisor Harvey Milk, the gay Jewish icon who was shot to death a few minutes before by Dan White, a former supervisor enraged that he could not retrieve his job.

White, also an ex-police officer and firefighter, had asked Mayor George Moscone to reappoint him as a supervisor, a post that he quit because he was not earning enough money to support his family. Moscone refused, and White killed him. In the mayor’s office. White then moved on to Milk’s office.

With one elected official murdering two others on November 27, 1978, we have compelling reason to fear that Capitol Hill could become the same kind of crime scene. In fact, one victim could well be another trailblazer from San Francisco as well as House members from Detroit, Minneapolis, the Bronx and southwest Washington.

It is conceivable that Feinstein, Moscone’s successor as mayor and California’s longtime senior senator, might discover the bodies since she currently works out of a Capitol Hill office. She described White as “probably as a true manic-depressive in a clinical sense.” How would Feinstein, who is Jewish, characterize Marjorie Taylor Greene?

Greene, a Republican who represents a northwest Georgia congressional district, made the radar of Jewish advocacy groups a few weeks ago when she suggested that the Rothschild banking complex of Europe was behind the use of space lasers to spark a massive wildfire in California. The Rothschild family is Jewish.

Earlier, she was attacked for making threatening suggestions against four Democratic members of the House of Representatives, including Speaker Nancy Pelosi of San Francisco and Reps. Alexandria Ocasio Cortez of New York, Ilhan Omar of Minneapolis and Rashida Tlaib of Detroit. In response, Congress eliminated her committee assignments. Pelosi is the first woman to serve as Speaker of the House.

Greene was more direct two weeks ago when she warned Rep. Jaime Herrera Beutler, a Washington Republican: “First voting to impeach President Trump, then yapping to the press and throwing @GOPLeader under the bus. And now a tool as a witness for the Democrats running the circus trial. The Trump loyal 75 million are watching.”

Seventy-five million people, nearly one-fourth of the population, is one huge number to be “watching” an obscure member of the House. What will they do if what they are watching offends them? Who will do it? The 75-million figure was almost the number of Trump’s voters last November; he actually received 74 million votes.

If the penalty is deemed to be severe, it makes sense to assign someone with easy access to Beutler, and the hit man, so to speak, should possess a firearm. The natural candidate: Marjorie Taylor Greene, who like Beutler works from an office on Capitol Hill and is a fervent advocate for possessing guns. How hard can it be for Greene to locate Beutler and one-up Dan White by blowing her away in a federal office?

If for some reason Feinstein is wandering through the House office area at that time, she will be in a position to discover Beutler’s bullet-ridden body.

Such a scenario is a genuine possibility. There is precedent not only in San Francisco but Capitol Hill itself – the January 6 siege that left a Capitol police officer and four others dead. Greene is just as demented as White. If any reader wonders how a non-mental health professional can make such a diagnosis, consider Greene’s words and actions that led to her tweet threatening Beutler.

According to Business Insider, Greene’s “Trump loyal 75 million are watching” threat was tweeted because Beutler dared say that she could corroborate a report’s details asserting that then-President Trump told House Minority Leader Kevin McCarthy that he sided with the protesters.

For telling the truth, Greene believes that her colleague deserves to be watched and perhaps pay for whatever 75 million folks witness. How do readers describe Greene’s sanity level?

Before she ran for office, Greene was in Washington when she encountered David Hogg, a survivor of the Parkland school massacre young enough to be her son, and she hounded him for his support of gun control as he made his way to the Capitol complex.

Two weeks ago, she evaded a question about stating in a 2019 video that Pelosi committed “treason” that is “punishable by death,” according to Forbes magazine.

Instead of expressing regret, she told reporters, “You owe the people an apology. You lied about President Trump,” a reference to reporting of alleged collusion between the Trump 2016 campaign and Russia.

She was then asked about liking a Facebook comment arguing Pelosi should get a “bullet to the head,” and  replied “when you want to keep telling the same story over and over but don’t want to tell the truth, that’s your problem.” She added, “And that’s how you end a press conference.”

During her campaign last year, Greene posted a meme that depicted her holding a firearm next to photos of Tlaib, Omar and Ocasio-Cortez.

Tlaib and Omar lost most of their credibility almost as soon as they took office two years ago, but at least they do not openly endorse violence. However, their anti-Israel rhetoric could influence their followers to harm Jews and other supporters of Israel.

Can this lead to a reprise of November 27, 1978? For a sample of what Capitol Hill employees could readily experience, what happened to Feinstein is recounted in The San Francisco Chronicle for the 30 th anniversary of the incident:

“Moscone had plans to appoint someone else and told Feinstein the morning of the slayings. She tried to track down White to explain the decision. She never got the chance.

“She was sitting at her desk at City Hall and tried speaking to White as he walked by. She did not know that he had just shot and killed the mayor.

“’I saw him come in. I said, ‘Dan, can I talk to you?’ And he went by, and I heard the door close, and I heard the shots and smelled the cordite, and I came out of my office. Dan went right by me. Nobody was around, every door was closed.

“’I went down the hall. I opened the wrong door. I opened (Milk’s) door. I found Harvey on his stomach. I tried to get a pulse and put my finger through a bullet hole. He was clearly dead.

Feinstein could well be haunted by another “hard moment” at her workplace. This time in Washington, D.C.