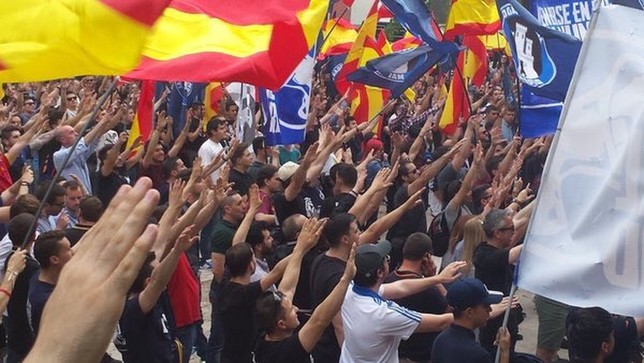 Human beings who live on the surface of the Earth, normally do not give much importance to the fact that in the center of our planet there is an iron and nickel core similar in size to the Moon, at a temperature of up to 6,000 degrees Celsius. However, from time to time, unexpected volcanic eruptions such as Cumbre Vieja in the Canary Islands, or Kilauea in Hawaii, overwhelm us and give us a little reminder of the danger that lies ahead. In the same way, the unexpected neo-Nazi demonstration authorized by the Government Delegate in Madrid last September, overwhelmed us and reminded us very explicitly that HATE lives within us, in the depths of our brain as social animals, lurking and ready at any moment to transform into violence.

We are animals and we retain traits in our minds that are older than humanity. What we now call Nazis, xenophobes and nationalists tend to have a plurality of simultaneous objects of hatred, such as blacks, Jews, homosexuals, people who are different, or enemies, all perceived as an atavistic threat of chaos and the unknown. The consolidation of HATE as a social emotion, more recently, originated in the hunter-gatherer herds from whom we, the 7 billion homo sapiens who occupy the surface of the Earth, have all descended. Our savannah ancestors had to face enormous selective pressures to survive. For humanity, HATE has been, possibly, the best tool for avoiding social entropy (the systemic tendency of every group to decompose), at an evolutionary time in which individual survival depended completely on the proper functioning of the herd to which they belonged. All humans today are descended from ancestors who made efficient use of hatred.

HATE is a social emotion, of deep antipathy, disgust, aversion, enmity or repulsion towards a person, thing, situation or phenomenon, as well as the desire to avoid, limit, or destroy that which is hated.  Bilateral hatred is that which occurs in both directions, and is common between enemy groups, and is usually the prelude to violence. The BILATERAL HATRED among the contenders of the First World War helped to mobilize the civil populations of both sides, to face the sacrifices of the war. And the cross hatred between the French, the English, the Germans and the Russians, was as essential in the war effort as the tanks, the cannons and the trenches. This type of reciprocated hatred is reasonable, because it is directed at countries or organizations that threaten our existence, or that make us suffer, or whose survival is opposed to our own.

When you are part of a minority within an intolerant society, the most reasonable strategy, for those who are the object of hatred, is FLIGHT. Manifestations of the above are the secular exodus of homosexuals and Jews from the countryside and the provinces to the capitals and large cities, or the exodus of blacks from the southern states to the cities of the north of the United States. But flight is not always an option, for we are social beings and our individual survival depends on the group. For a child who suffers from BULLYING at school, like half of the Spanish Jews in the time of the Catholic Monarchs, or the Armenians of the Turkish Empire in the 20th century, flight is not an option. Nor is BILATERAL HATE an option when you are a minority. How effective can it be for a bullied child to hate their oppressors? Hating someone who hates you is not reasonable or efficient, when the disproportion of forces is overwhelming.

Why do chickens peck their mutilated or unknown counterparts to death? Why do children and adolescents unleash bullying, with quite cruel methods, against anyone who deviates from the standard model of the group? Because chickens and humans are social animals, which have depended on, in the recent evolutionary past, homogeneous organizations to survive. In the case of humans, when we speak the same language and believe in the same gods, we are more socially effective, because it is easy for us to reproduce the wishes and expectations of our fellow citizens, and, ultimately, to cooperate in a peaceful, predictable and productive manner, though lacking in imagination.

All chickens alive today are descended from ancestors who pecked their mutilated or unknown counterparts to death. In terms of human morality, all chickens come from xenophobic and Nazi ancestors. This is why I am a loyal customer of Kentucky Fried Chicken. However, in the case of humans, the HATE of those who are different could have unexpected benefits for everyone, which is bitter and unfair. For that adolescent subjected to bullying, what sort of efficient response should he give? The only individual way to triumph over bullying is the so-called deferred achievement. The adolescent must transform the emotional energy of the hatred he feels into future satisfaction, admitting present suffering in exchange for future pleasure. This postponement of the reward allows time to develop “compensatory mechanisms and learnings”, which consist of the disproportionate development of technical skills in a specialized field. The mechanism is the same way by which the blind develop a gifted ear without consciously intending to do so.

Individuals and minorities who are the object of hatred define the set of their relationships with society throughout their lives, based on the treatment that society gives to their most unfortunate or defenseless fellow men. In the Italian Renaissance, Leonardo, Michelangelo, Botticelli, Donatello or Machiavelli, built their creative personalities as individuals belonging to a minority besieged by hatred. The words of the immensely famous Saint Bernardino of Siena of April 9, 1424, in Florence’s Santa Croce are still stirring: “Spit hard! Maybe the water of your spit will extinguish their fire. So, all of you spit hard!” And the sound of spitting on the basilica floor was said to be thunderous, according to Martin Gayford. It is difficult not to see in the provocative male nudes of the Sistine Chapel, and in the complete nudity of the sacred figures, the Michelangelo’s REVENGE for the spit of the Santa Croce of his native city.

Although many, many, unimaginative human beings are born, grow, work, fight and die with no real purpose other than to stay alive, according to Darwin, we owe our existence to them today. There have also been another very, very small number of individuals, who have launched sparks with new and crazy ideas, and thanks to them, we enjoy a civilization typical of Star Wars with technology that makes us look like gods. These very rare individuals were born, in principle, also without imagination and with no real purpose other than to stay alive, but by an incredible paradox of human history, they found a purpose for their life, fleeing from hatred, not physically, if not mentally, on a journey neither wanted nor deliberate, since this, and no other, is the origin of CREATIVITY.

We are all cognitive misers, and we try to avoid intellectual challenges, because, although the human brain responds to challenges by developing new skills, this consumes a lot of energy. For the psychologist Anders Ericsson, there is no such thing as GENIUSES and innate talent. The experts and virtuosos of a specific discipline make themselves so with years of DELIBERATE PRACTICE, which allows them to develop ever more efficient mental representations of their scientific or artistic specialty. But how do you get the motivation to spend your life in a solitary practice, such as deliberate and intentional practice? To forge an iron will, which allows us to lock ourselves up most of our lives, away from society, until we become virtuous performers of a branch of science or art, it is almost essential to be hated for being who we are, just as being blind helps to develop a gifted ear.

The HATE experienced, very frequently, has disastrous effects on the individuals and minorities who are the object of it. But it has also happened, recurrently throughout the history of humanity, that those hated for their identity have reacted by creating new skills that have led them to excellence and virtuosity, gifting us all (including those who hate them), with the highest levels of science (the truth) and the arts (the beautiful). As Michelangelo’s DAVID crossed the streets of Florence, bound for his final location, he was stoned by a small group of protesters who railed against the statue’s nudity and sodomy, as described by his biographer Martin Gayford. Undoubtedly, Ms. María de las Mercedes González Fernández, Government Delegate in Madrid, of the Spanish Socialist Workers’ Party, must have remembered this historical fact when she authorized the neo-Nazi demonstration on September 18, 2021, and when making her decision, she must have considered the possible long-term benefits for the arts (the beautiful) and for the sciences (the true) that could derive from such an exhibition of hatred.