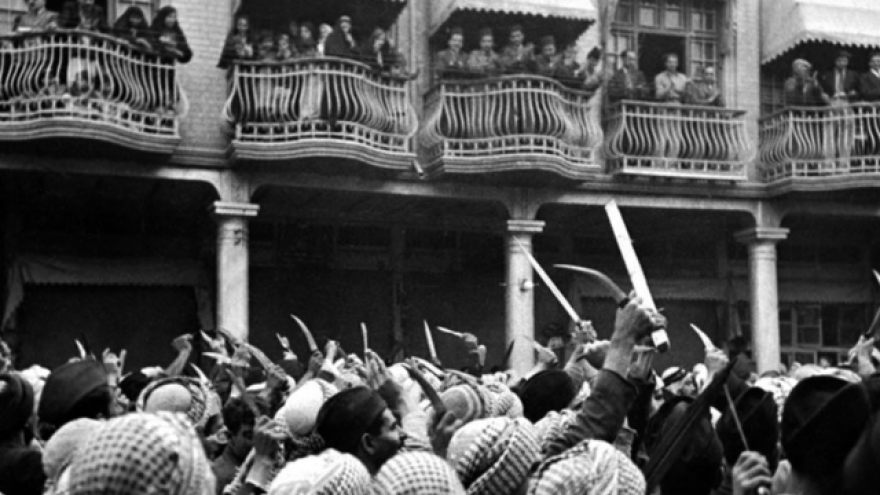 History keeps demanding to repeat itself. We bar the door and avert our eyes. But history proves itself an irrepressible companion, constantly jumping out from our past to become our future.

First, understand and acknowledge the history. The world has just marked the 80th anniversary of the Farhud, the Arab-Nazi pogrom against Jews in Baghdad and Basra on June 1-2, 1941.

The term Arab-Nazi is completely correct, not because these Arabs were merely fascist in mind and deed, but because they actually identified with Germany’s Nazi Party. Some of the rioters wore swastikas; more than a few actually marched in the Nuremberg torchlight parades.

The Baghdad Arab mobs burned dozens of Jewish stores and invaded Jewish homes, looting them. Many families tell a similar story: A wild mob pushed past the furniture stacked against the door, and with swords swinging, chased the Jews up the stairs to the roof, then across the roof. Frantically, the Jews would jump from roof to roof as they were pursued. When there were no more roofs to jump to, the children were thrown over the side, in the desperate hope that there would be someone on the ground below with a blanket to catch them.

We will never know how many hundreds were murdered or mutilated because in the investigation that followed, many were afraid to come forward. Jews had dwelled in Iraq for some 2,700 years and had greatly uplifted that modern nation. But on those two days, the Farhud spelled the beginning of the end of Iraqi Jewry, totaling more than 140,000 souls.

After WWII, Iraq’s Jews were systematically expelled—stateless and penniless. In an official terror campaign, they were threatened with imminent doom and were subsequently airlifted out, mainly to Israel, as Arab nations sought to drop a humanitarian bomb on the new Jewish State.

The outrage in Iraq was part of a very public intern­ational ethnic cleansing action, targeting centuries-old Jewish communities, imple­mented by a wide coalition of Arab and Muslim nations, coordinated by the Arab League, openly announced at the United Nations and playing out on the front page of The New York Times at high noon.

Country after country, from Morocco on the North African coast to Iraq at the bottom rim of Asia Minor, targeted some 850,000 Jews, robbing them of their possessions, their homes, their businesses and their citizenship.

In this organized dispossession, during the final days as the Jews were being driven out of lands they knew for centuries, earrings were torn from their lobes, bracelets ripped from their wrists, and with only the clothes they were wearing, they were hatefully expelled.

They were rescued mainly by emergency airlifts to Israel, where the resettled communities today constitute about half those families, exposing the big lie that many suggest the population of  Israel is wholly or mainly comprised of people from Brooklyn, Berlin or Belarus. In fact, half of Israel’s current population originated from just down the road, just next door and just elsewhere in the extended Arab crescent.

The mass expulsions of the 1950s were the fruit of an intense, fervent worldwide alliance of Arabs and Muslims with the Nazis during the Hitler regime, during the Holocaust and after World War II, with the embers of Jewish persecution still burning.

From 1933, Arabs immediately approved of what Hitler was doing, and many joined the Nazi movement led by the war criminal, the Mufti of Jerusalem, Haj Amin al-Husseini. German consulates from Tel Aviv to New Delhi were besieged with requests to join, emulate or recruit for the Nazi movement.

The Mufti met with Hitler in a highly-publicized newsreel-recorded event and agreed to join in exterminating the Jews in Palestine. Hitler agreed to recognize a Nazi-style Arab State. For his part, the Mufti recruited thousands of Arabs and Muslims to fight in three Waffen-SS divisions: the Handschar, the Skanderbeg and the Kama, fighting in Nazi battlefield trenches and operational garrisons from Paris to Poland and beyond.

These Islamic divisions were under the direct protection of Heinrich Himmler, architect of the Holocaust. The Mufti also worked closely with Holocaust engineer Adolf Eichmann and, in his post-war diary, called Eichmann a “rare diamond.”

More than that, the Mufti visited Nazi concentration camps, and clearly understood the details of the “Final Solution.” He lobbied European governments and the Red Cross not to send more Jews, especially children, to Palestine—thus saving their lives—but instead to death camps in Poland.

After Hitler’s Reich fell in May 1945, some 2,000 leading death-machine Nazis escaped Nuremberg justice and fled to Arab countries via various “rat lines” operated by the Catholic church and other post-war clandestine operations. Once in the main Arab “confrontation” countries neighboring Israel, the Nazis adopted Muslim identities and took up senior security and military positions to create the post-war Middle East our world knows today.

Dr. Aribert Heim was notoriously known as “Dr. Death” for his grotesque pseudo-medical experiments on Jewish prisoners in the concentration camps. He was fond of decapitating Jews with healthy teeth so he could cook the skulls clean to make desk decorations. Heim converted to Islam and became “Uncle Tarek” Hussein Farid in Cairo, where he lived a happy life as a medical doctor for the Egyptian police.

Franz Bartel, an assistant Gestapo chief in Katowice, Poland, became El Hussein and a member of Egypt’s Ministry of Information. Hans Becher, a Gestapo agent in Vienna, became a police instructor in Cairo. Wilhelm Boerner, a brutal Mauthausen guard, became Ali Ben Keshir, working in the Egyptian Interior Ministry and as an instructor for a Palestinian terrorist group. Space makes it impossible to list hundreds more.

But we know that after the Third Reich fell, the most popular name for a newborn, after “Mohammad,” was “Hitler.” Many will recall the highly visible Egyptian supreme military lead Field Marshall Mohamed Hussein Tantawi. His brother was a high official named “Hitler Tantawi.”

Thus, the hate lines and battle lines of the modern post-war Middle East were constructed by, sharpened, politicized and made more lethal by actual senior Nazis carrying out Hitler’s final legacy. These well-placed Nazis also ensured that Iraq and other Arab nations applied the Eichmann method—identification, confiscation and deportation—to almost a million Jews who had long been citizens of those nations. Eventually, several of the Nazi transplants worked with the KGB to create the PLO and even helped train the Mufti’s nephew, Yasser Arafat.

Israel is fighting the same Hitler principles today as civilization was in the 1940s.

The Arab-Nazi continuum was forgotten, obscured and reduced to a platen of smoldering dots until I connected them in my 2010 book, The Farhud: Roots of The Arab-Nazi Alliance in the Holocaust. The book coalesced a movement of Sephardic Jews who demanded that their persecution and expulsion be recognized.

On June 15, 2015, in an event at United Nations headquarters in New York City, streamed globally, I led an esteemed group of Jewish leaders who defiantly proclaimed June 1-2 to be International Farhud Day as a worldwide commemoration forevermore. It is now observed in many countries in many ways, with candles and with courage, with lectures and with lessons yet to be learned.

But enough history. Let talk about last month, last week and even the hours before this message was penned. Everyone knows we have seen a resurgence of Nazi-style, pro-Palestinian, anti-Jewish violence on our streets. And mind you—it’s not anti-Zionist or anti-Israel agitation. It is vocal, visible and undisguised Jew-hatred.

Mobs with Palestinian flags have been driving through Jewish neighborhoods and marching down the street, calling out for Jews, humiliating them, threatening them, chasing them, trying to run them over and beating them in gang assaults. This causes me and many others to ask, “Can the Farhud of 80 years ago occur again today somewhere in Europe, the Middle East or even the United States?”

History records many farhuds by many names. In 1096 in Germany, in 1190 in York, and in the 1390s in Spain, these were just “massacres.” In late 19th-century Russia, the assaults became known as pogroms. In Nazi Germany, they were called aktions. In eastern Europe, as the Einsatzgruppen led local crowds in grisly exterminations, we call it the “Holocaust of Bullets.”

There aren’t enough trees producing paper, not enough pens dripping ink, not enough editors reading manuscripts, nor enough strength or sinew in my typing hands to list all the bloody atrocities that have befallen the Jews in that ubiquitous location known as “here, there and everywhere.” Throughout history, only the shirts have changed color. Blood, however, retains its same crimson hue.

I know many Jews are now afraid to wear the yarmulke openly. That’s why I have decided to wear one whenever I go out in public as often as I can. Not because I am observant—but because I am defiant.

Understand this: The Palestinian-Arab bands hunting for Jews with impunity are all basically cowards. They don’t face people one on one. They rely on a mob of 10 or 20 people to surround a few weak-looking Jews, often elderly, often religious.

They call out on loudspeakers as they drive through the streets to slaughter Jewish men and rape Jewish daughters, as was done a few weeks ago in London. Videos are piling up from Los Angeles, New York, London and Germany showing Jews being surrounded and beaten in the streets in scenes reminiscent of the run-up to the Holocaust, the Farhuds and so many other similar bloodlettings. This is because Arab militants and pro-Palestinian agitators still idealize Hitler.

Hezbollah today gives a Nazi salute. This mentality has finally infected the mainstream. Major editors at AP and the BBC, to name a few, have been caught with tweets proclaiming: “Hitler was right” and other anti-Semitica.

A few weeks ago, the Anti-Defamation League clocked 17,000 tweets in mid-May with permutations of the hashtag “Hitler was right.” A week later it was 70,000 tweets. But now, who’s counting?

The pro-Palestinian mob has been emboldened by the summer protests and violence that now seem so normative. They are encouraged by leftists and progressive Democrats in “the Squad,” who seem to control their entire party. Even Chuck Schumer, Jerry Nadler and Nancy Pelosi are quaking in fear of being primaried.

Just as damaging are the misguided, completely uninformed and self-destructive comments by ultra-liberal Jewish groups. The Squad and the powerful Democratic minority continually issue anti-Semitic dog whistles via their tweets and comments.

False statements that Israel is an apartheid state—an utter falsity—give green lights for pro-Palestinian gangsters to ramp up their street violence, ramp up their threats and make Jews afraid to gather, stand for Israel and even attend their own synagogues. The anti-Jewish agitation has gone from weekly incidents to hourly.

In the Middle Ages, it was religious crimes, then well-water crimes, then eugenic and genetic crimes, all fake … and now apartheid, ethnic cleansing and occupation crimes.

To those who, on the 80th anniversary of the Farhud, wonder if a Farhud could happen again today, here is your answer: Ask again tomorrow.