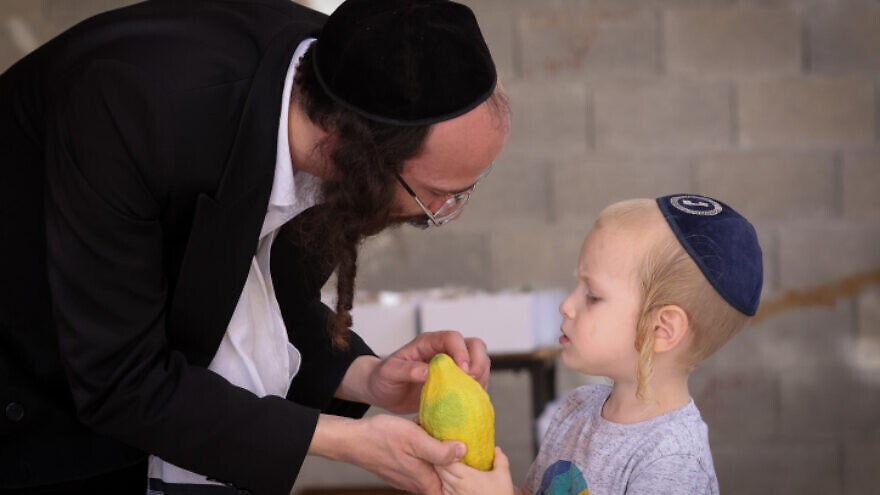 During the middle days of the Sukkot festival, small groups of haredi kids can be seen wandering along the thoroughfares of New York City’s Upper West Side, asking passersby whether they are Jewish. If the answer is affirmative, they will proffer a lulav and an etrog so that the same passerby can perform one of the sacred traditions of the holiday. The kids are effusive but also polite, and most people who encounter them, Jewish or not, do so good-naturedly.

But not everybody. Walking up Amsterdam Avenue last Thursday, I caught sight of a middle-aged woman scolding a haredi boy of about bar mitzvah age who was standing behind a display table. As I got closer, I noticed that she was jabbing her finger in his direction while she pontificated—although amusingly, the look on the kid’s face suggested that whatever she was saying was going in one ear and out the other.

Once I was in earshot, the first thing I heard her say was, “there’s enough anti-Semitism around without you people making it worse.” I hadn’t planned to interject, but I couldn’t let a remark like that (“you people”) go unanswered. So I faced her and said, “Ma’am, I’m sorry, but you should know that Jews are never responsible for causing anti-Semitism. Anti-Semitism is a non-Jewish problem.”

Arching her eyebrows at me, her first response was to say, “I’m Jewish,” with the inflection in her voice insinuating that since I probably wasn’t, I should mind my own business. As I speak with an English accent and was dressed casually without a kipah on my head, I can understand why she might have come to that conclusion, but I quickly disabused her on that score before explaining that being Jewish doesn’t give you a pass when it comes to making anti-Semitic comments. “You’re telling a Jewish child that he’s provoking anti-Semitism just by standing in the street,” I told her.

Leave aside that this encounter took place in the open air and the haredi kid was standing about 10 feet away from the woman, so it wasn’t technically necessary for him to wear a mask. What she articulated, as I told her directly, was a malicious lie. It’s one thing to acknowledge that vaccination rates and general observance of COVID-19 protocols are much lower among certain Chassidic communities in specific sections of Brooklyn, as is the case with other demographics in the city; data from the NYC Department of Health shows that only 44 percent of blacks and 45 percent of whites in Brooklyn have been vaccinated, while in the Bronx, just 43 percent of the black community is vaccinated—and this is more than six months after the vaccines became available. Yet however worrying the situation in parts of the haredi community is, the blanket assertion that “none of them” have been vaccinated, that “none of them” wear masks, and that they shouldn’t be walking around the city freely as a consequence, is rooted in prejudice, not reasoned appraisal of the facts.

If an Orthodox kid from Brooklyn amounts to a serious coronavirus transmission risk simply by standing outdoors, then so, too, is the homeless guy who just asked you for change, along with any visitors from Texas or Florida browsing in the Apple Store and, indeed, just about anyone from any location that doesn’t share Manhattan’s 79 percent vaccination rate. But I doubt that my interlocutor had thought about the problem in these comparative terms; only the sight of an Orthodox Jewish kid sharing his lulav with strangers triggered her fears of a new wave of pandemic cases on the Upper West Side.

That a Jewish individual should react in this way is shocking and certainly heartbreaking. The woman’s willingness to use ostensibly reasonable concerns about public health as an excuse to berate a child in public was an unmistakable sign that she was driven by a primal dislike of haredi Jews, rather than a desire to bolster that community’s take-up of the vaccine. From her manner, tone and choice of words, she demonstrated that there is little difference between the anti-Semitic tropes used by non-Jews and those used by Jews who have internalized the prejudice; in her view, these haredim were outsiders who had taken over the streets, poisoning a close-knit community in the process and thereby making life unnecessarily difficult for those Jews who are, well, much more like everyone else.

The psychology and history of Jewish anti-Semitism is a fascinating topic but beyond the scope of this article. Suffice to say, we all know it exists, and we all know that raw prejudice among Jews against those who are visibly Jewish—that they are loud, rude, unwashed, contemptuous towards outsiders and all the rest of that baggage—is our community’s dirty secret. But at a time when anti-Semitism rooted in COVID conspiracy theories is echoing from the halls of the U.S. Congress to the angry demonstrations opposing the “health pass” in provincial French cities, we would do well to re-examine our own preconceptions. That is especially true for those Jews who regard their haredi brethren as a source of social embarrassment.

Look in the mirror and ask yourselves why.