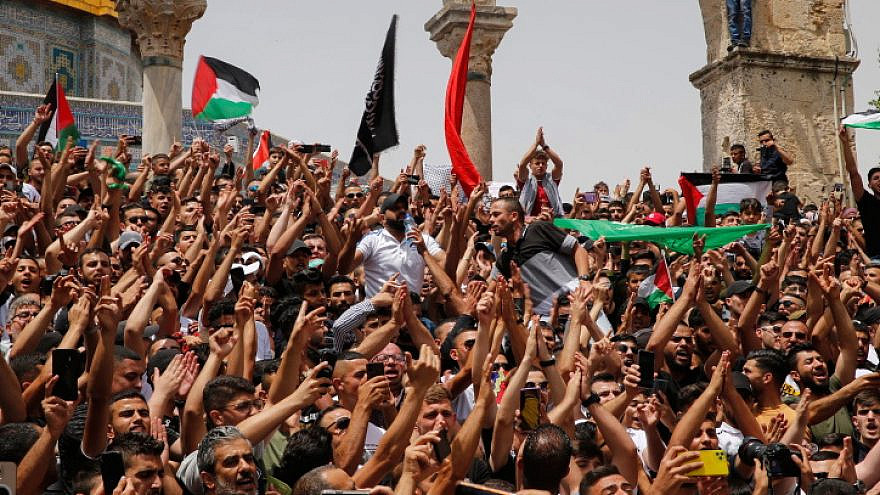 The Palestinian war against Israel is no longer something that the West can regard as a quarrel in a far-away country between people of whom they know nothing.

At a recent congressional hearing in America, Rep. Ilhan Omar (D-Minn.), who has a long history of anti-Semitic and anti-Israel remarks, equated the United States and Israel with Hamas and the Taliban in committing “crimes against humanity.” When 12 Jewish Democrats accused her of bigotry, she and her allies accused them of racism and Islamophobia.

Any criticism of Muslims elicits such taunts from so-called progressives, many if not most of whom also regard Israel with distaste or worse.

Emboldened by such impunity, the lies and incitement continue. This week, Rep. Rashida Tlaib (D-Mich.) slandered Israel by saying it “doesn’t value Palestinian lives” and accusing it falsely of “a decades-long ethnic-cleansing project.”

The way in which Palestinianism is driving anti-Semitism and Islamization is on even more shocking display in Britain, where attacks on Jews are running at even higher levels.

Most such attacks are committed by Muslims. These are also disproportionately represented at pro-Palestinian marches where they scream for the destruction of Israel and chant in Arabic “Khaybar ya yahud”—a threatening reference to Mohammed’s slaughter of the Jews of Khaybar in the seventh century.

Anti-Semitism and Palestinianism feed each other. Britain’s Jewish Chronicle has obtained a recorded tape of remarks made by members of a convoy traveling from Bradford to London for a pro-Palestinian demonstration last weekend. At this rally, where speakers made repeated claims that Hamas was a legitimate resistance force, there were placards calling Israel a “Nazi state” and which asked: “What is anti-Semitic in saying that all Jews support violence and imperialism?”

On the tape, Muslim activists referred to Israel’s new prime minister, Naftali Bennett, as “a bigger Satan” than Benjamin Netanyahu, claimed that the United Nations was being manipulated by a shady network in favor of Israel and called these Israel supporters dajjals, or mythological demons. A month previously, a convoy flying Palestinian flags drove through Jewish areas of London with activists shouting “f*** the Jews, rape their daughters” out of car windows.

Yet a number of Labour Party politicians are helping fuel this venomous hysteria and incitement. During a debate on “Israel-Palestine” on Monday, Labour MPs called for a boycott of Israel.

Addressing Bennett, Bradford MP Naz Shah, who has a history of anti-Jewish remarks, described Israel’s understanding of the right to self-defense as “perverted” and said if any more “Palestinian blood” was “unjustly spilled,” she would push for Israel to be tried for war crimes in the International Criminal Court.

Labour MPs regularly take part in demonstrations where marchers chant for the destruction of Israel and the killing of Jews. At one such rally in Bradford earlier this month that featured an appearance by Shah, activists chanted in Arabic: “God, make us part of the mujahideen in Palestine” and “God, lift the curse of the Jews off the Muslims in Palestine.”

Not only is Palestinianism fueling anti-Jewish hysteria and attacks, but it is also increasingly cowing the British into acceding to its dictates, which fly in the face of fairness, decency and reason.

Following last month’s violence in Israel and Gaza, pupils at a high school in Manchester raised money for charities aiding Palestinians. But there was uproar when it was revealed that the funds were to go to the Red Cross, which aids Israeli and Palestinian victims of violence alike.

One parent said: “Imagine funding terrorists who kill babies, children and elderly innocent people. The IDF exactly do that.” Another parent, named Tom Price, said: “A nuclear superpower that subjugates and murders an indigenous people and gets away with breaking international law on a daily basis has no need for the money.”

Yet the head teacher “unreservedly” apologized for having inadvertently “caused offense to some members of the wider community”—grotesquely, just for supporting aid to Israelis alongside Palestinians—and thanked “leaders of our local mosques, our governors and the wider community who offered support and counsel.”

Even more eye-opening is how the Palestinian cause has become a major issue in the imminent parliamentary by-election in the Yorkshire seat of Batley and Spen.

This is because of the constituency’s significant proportion of Muslim voters, who have been galvanized by the demagogic George Galloway—a virulent pro-Palestinian extremist, who was expelled from the Labour Party almost two decades ago and who is standing for election on an anti-Zionist platform that whips up hostility to Israel and hysteria over “Islamophobia.”

So extraordinarily, a foreign issue in which Britain is not involved is insinuating itself into the center of British politics and culture, corrupting both with its agenda of obsessional bigotry against Israel and the Jewish people.

In driving the spike in anti-Semitism, Palestinianism is opening up a posthumous Nazi front against the Jews.

If this sounds outlandish and monstrous, it is. But the evidence suggests that it is nevertheless an all-too-realistic description of what is now taking place.

When Hitler was defeated, the war against the Jewish people seemed to be over. But it wasn’t. Western anti-Semitism merely went underground, waiting to be released again as the natural order of things.

And in one part of the world, the war against the Jews was about to enter a new phase. Under the Grand Mufti of Jerusalem, Haj Amin al-Husseini, the Arabs of British Mandatory Palestine had become Hitler’s legion in the Middle East. Fusing Nazism and Islamic fundamentalism, al-Husseini incited the Palestinian Arab masses to murderous pogroms with the lie that the Jews were about to destroy the Al-Aqsa mosque.

Exactly the same rhetoric emanates today from the Palestinian Authority and incited the recent terror upsurge by Palestinians and Israeli Arabs. The P.A., led by the Holocaust-denier Mahmoud Abbas, who on his own account hero-worships al-Husseini, pumps out Nazi-themed anti-Semitism week in, week out, brain-washing its people into murderous hatred against the Jews.

Furthermore, both the Palestinian cause and Palestinian “identity” itself are based on the attempted theft and appropriation of the historic homeland and history of the Jews—the indigenous people of the land of Israel.

So it’s not just that the demonization and delegitimization of Israel are fundamentally anti-Jew. What’s not properly understood is that Palestinianism is anti-Semitism. Western liberals who support the Palestinian cause are supporting a profoundly anti-Jewish agenda not only to steal the land of the Jewish people, but to wipe out their history and thus their identity.

Far more ominously, this is also the passionately held default narrative for millions of Muslims who have settled in Britain and other Western countries.

As they become more assimilated, and their children enter the professions and political life—in itself a welcome development in terms of social acceptance—they are unfortunately seeding this poisonous narrative throughout British society.

A lethal obsession once confined to the far left is now gaining enormous cultural traction through the number of British Muslims developing public influence (with the sterling exception of those few British Muslims who take a brave and principled public stand against Jew-hatred). But anyone who dares point this out is denounced as a racist and Islamophobe.

This strategy of cultural manipulation and intimidation threatens to push British politicians into hostility towards Israel. It is actively imperiling the security of British Jews. And it is undermining the integrity and values of Britain itself, as its cultural leaders increasingly kowtow to its dictates through ignorance, ideology or fear. And America is going in the same direction.

Palestinianism is no longer just about the Middle East. It’s now providing cultural rocket boosters behind both anti-Semitism and Islamization in the West.