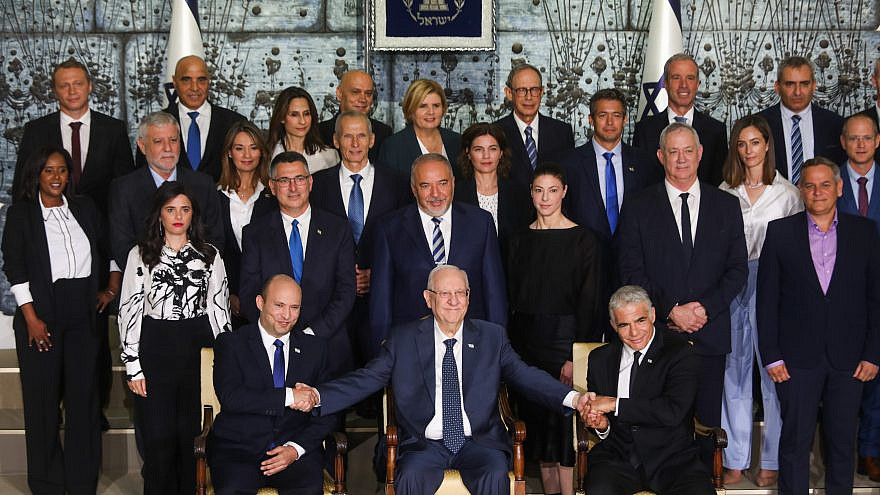 If the tone of discourse in the Knesset during the session in which Prime Minister Naftali Bennett and his “government of change” were legally confirmed seemed intemperate and unnecessarily hysterical, it’s hardly surprising.

The culture of Israel’s parliament is itself something of a disgrace. Indeed, when Israeli school teachers seek to reprimand an unruly class, they generally ask, “Where do you think you are? The Knesset?”

Yet the hysterical and nasty tone of the Sunday session wasn’t just reflective of the unfortunate custom of a legislative body where bad behavior is often the rule rather than the exception. The whole debate about the possibility of Benjamin Netanyahu being tossed out of office after more than 12 years seemed to bring out the worst in everyone in Israel and American Jewry.

As disorienting as it may be to live in a world where Netanyahu is not either Israel’s all-knowing leader or its unaccountable “crime minister,” as the crowd that gathered to demonstrate outside his official residence on Saturday nights has been calling him for the past two years, it is now the reality. And though it may be hard to remember what life was like before the spring of 2009 when he began his second stint in office, we’re all about to realize that the impact of his demotion to the leader of the opposition may not be as great as either side has been asserting for so long.

His sure-handed approach to economics helped guide the country to prosperity, even if most middle-class people still struggle to get by on salaries that are inadequate to their needs. Israel is richer and its economy stronger for his efforts.

He was equally successful in dealing with the country’s daunting security dilemmas. While the ongoing conflict with the Palestinians remains, his genius lay in understanding that this problem is, at least for the foreseeable future, insoluble and required proper management rather than bright, idealistic and unworkable ideas that only made Israel less safe.

His diplomatic skills also helped break Israel’s isolation and expand its network of allies and friends. Part of that was made possible by his tough-minded opposition to the efforts of former President Barack Obama to effect a rapprochement with Iran that endangered Sunni Arab states as well as Israel. While it was the Trump administration that deserves credit for the Abraham Accords, Netanyahu’s years of under-the-table efforts set the stage for it.

While that—and his impressive management of Israel’s efforts to cope with the coronavirus pandemic—has led his followers to believe that Netanyahu is the only person capable of leading the country through future crises, he’s also the victim of his own success.

His supporters fail to understand is that the bizarre left-right-center coalition led by new Prime Minister Naftali Bennet and Foreign Minister Yair Lapid, who is slated to take over the top job in two years, was made possible not only by the personal animus all of its elements bear for the Likud leader. It’s also a product of the consensus about security issues that Netanyahu helped forge that has essentially remade Israeli politics.

If Israel were still as evenly divided about the Palestinian question as it was in 2009, the idea of left- and right-wing parties working together would have been impossible. Though Labor and Meretz on the left hold views that are incompatible from of those of Bennett and other right-wingers in the anti-Netanyahu coalition, as well as those of centrists like Lapid and Defense Minister Benny Gantz, all of them know that thanks to the lack of a Palestinian peace partner, none of them are likely to be put to the test.

The same goes for the threat about Iran on which the majority of the new coalition is largely united and holds views that are little different from that of the Likud.

Netanyahu’s insistence that Israel needs him more than it needed a right-wing government, even if it was led by someone else, is also more evidence that the old political divide is no longer paramount.

And that makes the talk about betrayal, and Iran or Hamas celebrating Netanyahu’s demise, ridiculous. Bennett and Gantz may not agree on a lot, and the other parties in the coalition, including the anti-Zionist Ra’am Party, may also be at odds on the big issues. But Israel’s current position, though hardly invulnerable, is sufficiently secure to allow a government that can only function as long as it doesn’t have to answer existential questions to carry on at least for the short term, and perhaps for far longer than Netanyahu and his loyalists think.

That demonstrates why the appetite for change was so great.

Of course, so great is his reputation as a political wizard that commentators must qualify their evaluations of the current situation by acknowledging the possibility that he will make good on his promise to take down Bennett and return to power. But it is that possibility that will ensure that the new coalition is likely to hang together for a while. Having betrayed so many of his former allies and followers, including Bennett and other leaders of some of the new coalition parties, none will believe a word he says or be vulnerable to being persuaded to abandon their unlikely bedfellows.

The longer life goes on without Netanyahu at the helm—and in the absence of proof that Israel will be any less worse off for its citizens—the smaller the shadow he will cast over his successors. His churlish exit from office with over-the-top language about his parliamentary defeat being only the result of “fraud” will only redouble the determination of those who cast him out of office to keep him on the opposition benches for as long as possible.

What he will also have to reckon with is that now that Bennett and Lapid are in power, their political fate will be in their own hands and not a function of what he says about them. They may falter and prove to be inadequate to the task. Yet it’s also possible that they will muddle through and allow Israelis to understand that, for better or worse, the notion that without one man the country will fall apart is a myth.

That’s the nature of politics. Netanyahu thinks he has been treated unfairly and, in some respects (especially with regard to his trial on largely insubstantial corruption charges), that’s true. But nothing—not even the tenure of the most talented leader—can go on forever, and it may be easier to get used to life without him in power than those whose political imaginations revolve around him realize.

That’s why the hysterical punditry about Netanyahu and his successors in the last several weeks is not likely to stand up very well if we look back on them in six months or a year. As much as he will want the argument to continue to be about him, ultimately, the future of a country is never about one person. While he may not be ready to go quietly or graciously into the night and await the judgment of history, everyone else should be prepared to move on and deal with a reality in which he is no longer all that important. Whether you supported him or deplored his influence, the sooner we all are prepared to talk about something other than Benjamin Netanyahu, the better off Israel and the work of those who are dedicated to its support it will be.