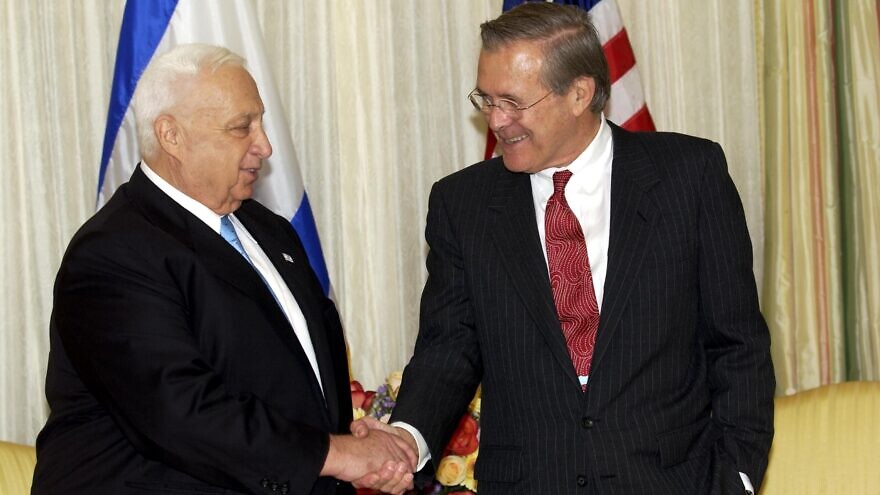 Despite much of the criticism of Donald Rumsfeld for his handling of the Iraq War, the late former defense secretary’s associates praised him for his decisions during an unstable time for American security.

“The American people owe a debt of gratitude to Donald Rumsfeld, who devoted his life to public service. He served our country as a naval officer, a member of the House of Representatives and in numerous roles in two Republican presidential administrations,” Coleman said in a statement. “As Secretary of Defense under President George W. Bush, Rumsfeld’s steady hand and innovative thinking guided our military in the difficult days after 9-11. Over the next few years, he led the fight against terrorism and made our country more secure.”

Those who knew Rumsfeld described him as a man of contradictions — a conservative who believed he could fix many problems with good government. He was a skilled, and some said even “wily” politician as a member of Congress. As a proud Eagle Scout, he was adamant about always telling the truth. He was known as severe and critical, with a great sense of humor.

While Troy had only brief moments interacting with Rumsfeld while working in the White House, he later sat down to interview him as a historian. Troy wrote in City Journal that Rumsfeld’s worldview was shaped from a young age by news he heard over the radio of the bombing of Pearl Harbor in 1941 and the death of President Franklin D. Roosevelt. And in his later life, Rumsfeld was shaken by the 9-11 attacks.

“[Rumsfeld] was determined to make sure that the United States would not be vulnerable to terrorist attacks in the future,” Troy told JNS.

His strong convictions, which were sometimes confused for arrogance, led him to conflicts with other Bush administration officials, most notably Secretaries of State Colin Powell and Condoleezza Rice.

Rumsfeld, according to Troy, favored a more aggressive foreign policy, while Powell was more of an internationalist who believed in international institutions.

“Rumsfeld was never afraid to speak his mind. But Powell was a little Buddha-like or sphinxlike in internal meetings. Didn’t say much of what he thought,” Troy said. “And then it would appear in The Washington Post what he thought, and Rumsfeld would get understandably annoyed by this and say, ‘Look Colin, we were in the same meeting, you didn’t say anything and now I’m reading in The Washington Post that you object to stuff?’ So, Rumsfeld was willing to call him on that kind of stuff and would directly confront him about leaks.”

But while they were bureaucratic rivals, they were still able to poke fun at each other. Troy recalled that one time, Powell served Rumsfeld and Rice lunches brought out on fancy, domed trays. When the domes were pulled away, there were brown paper bags with sandwiches inside.

“Rumsfeld had a good laugh at that,” Troy said. “I think he was always willing to share his opinion and he had a good sense of humor, but he also was a tough inside player.” 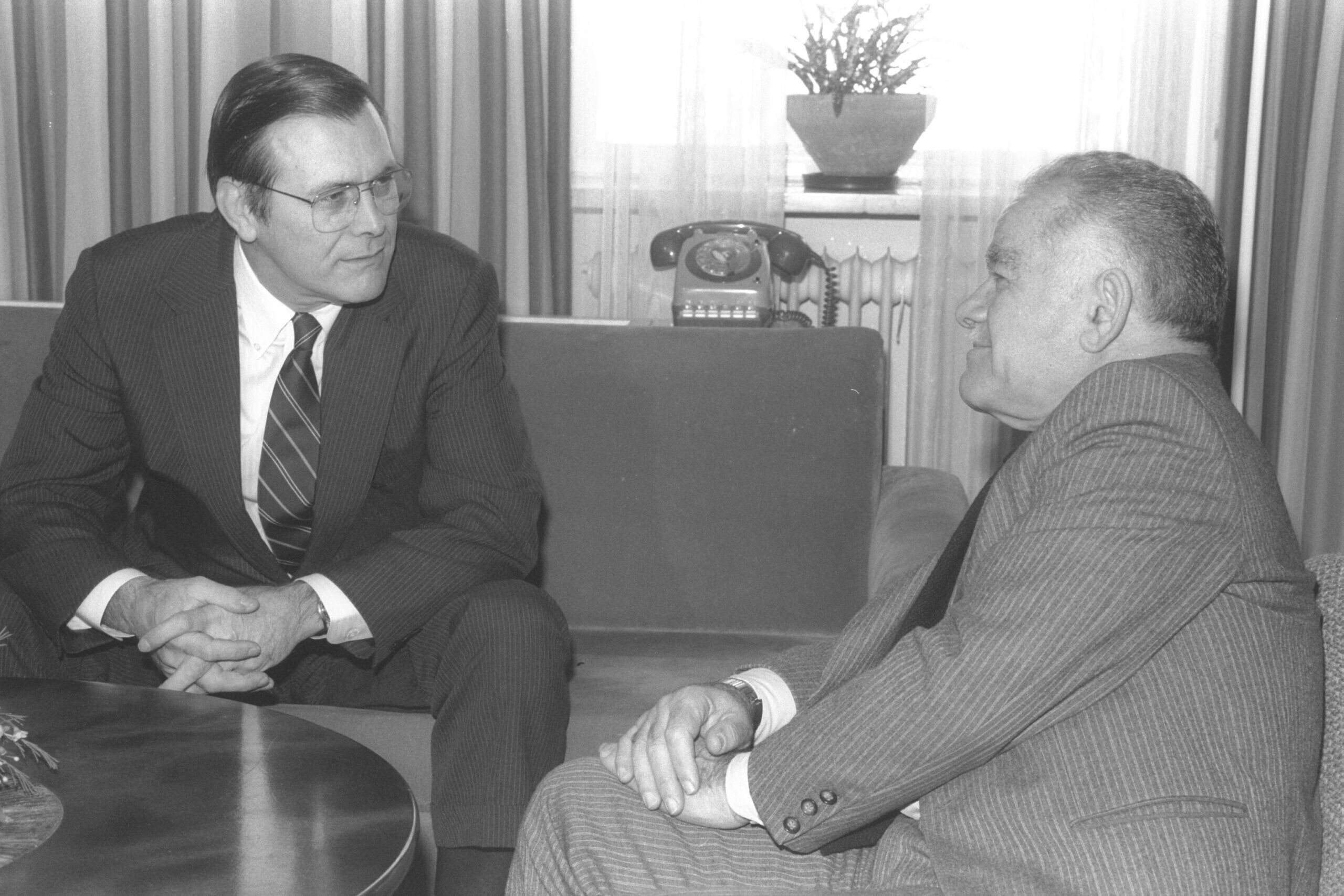 Douglas J. Feith, senior fellow at the Hudson Institute and former U.S. Under Secretary of Defense for Policy in the Bush administration, worked closely with Rumsfeld from 2001 to 2005. Feith did not know Rumsfeld before Rumsfeld hired him for the position, but the two got along, in part because Rumsfeld liked Feith’s memos.

“His death is a serious loss for the country, and I think that he did an enormous amount of good,” Feith told JNS. “We all know that nobody is perfect, and nobody is indispensable, but very few people contributed as valuably to the country as he did.”

Feith said that Rumsfeld appreciated clear writing, which he said was the basis for their relationship, and was frustrated by bureaucratic writing. Rumsfeld would always edit memos and staffers used to joke that he would edit a stop sign.

“If somebody would come and give him a briefing and it wasn’t up to his standards of clarity and comprehensiveness, and if the person couldn’t defend the factual basis for the statements he was making at a briefing, Rumsfeld could shred him. And so he wound up rubbing some high-ranking people the wrong way,” Feith said. “And when he got into political trouble because the Iraq War didn’t go well, people that he had rubbed the wrong way came out with their knives drawn.”

But Feith said that accusations of Rumsfeld being closed-minded were wrong.

“I saw him on a number of occasions change his mind,” Feith said. “He was not closed-minded. And it’s just some people who lost arguments with him thought they lost the argument not because their argument was weak, but because he was closed-minded.”

Feith said that Rumsfeld had a strong admiration for Israel.

“The things that he loved about America — the frontier spirit, self-reliance, pride in defending their democratic country and upholding its sovereignty — he saw also in Israel and in Israelis,” Feith said.

Feith, as Rumsfeld’s main foreign policy advisor, said Rumsfeld prevailed on Bush when there was disagreement within the administration of how to treat Palestine Liberation Organization leader Yasser Arafat. With the collapse of the 2000 Camp David Summit, Arafat had launched the Second Intifada against Israel. Some in the Bush administration, like Powell, argued that the situation could be improved if Bush would reach out to Arafat and try to woo him diplomatically. But Rumsfeld disagreed.

“Rumsfeld believed that Arafat was not only a terrorist, but thoroughly dishonest and was an unreconstructed terrorist. He didn’t buy the idea that Arafat’s participation in the Oslo process had transformed him into a statesman,” Feith said. “So, when Colin Powell was arguing for a presidential outreach in favor of Arafat, Rumsfeld and [Vice President Dick] Cheney were the main voices of skepticism about Arafat and arguing that the president should not invest American political capital in Arafat.”

In early 2002, Feith joked with Rumsfeld that the policy towards Arafat should be based on a quote from movie executive Samuel Goldwyn, who once said about somebody, “Don’t pay any attention to him. Don’t even ignore him.” The line, Feith said, means to ignore someone so thoroughly that it’s not even a conscious action. Rumsfeld liked the line so much he included it in a memo to the president. And that, in fact, became Bush’s policy.

As a result of controversies relating to handling of the Iraq War, Rumsfeld resigned in 2006.

Feith said that some criticisms of how Rumsfeld oversaw the war were valid and others were not, but that Rumsfeld never lied, and that his legacy should be that he helped develop a successful strategy against terrorism in response to 9-11.

“That strategy had, as its major aim, to prevent follow-on attacks on the scale of 9-11 that could have transformed the United States into a fortress country or a police state to defend itself. A series of devastating 9-11 type attacks was what we were worried about after 9-11,” Feith said.

“We did not have another 9-11 scale attack,” Feith said. “And it wasn’t because the terrorists were not trying. The strategy that Rumsfeld helped put in place protected the United States. And that is an enormous item to his credit.”