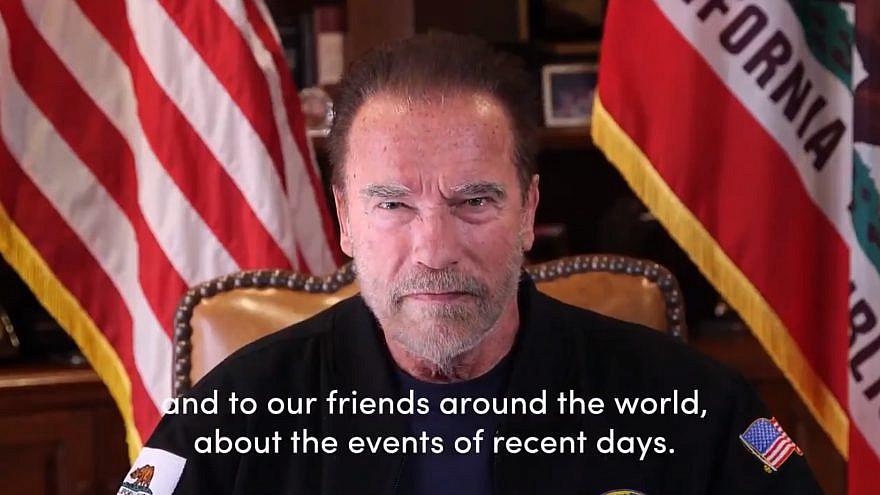 Former California Gov. Arnold Schwarzenegger received a lot of ill-deserved praise this week for his response to the Jan. 6 riots on Capitol Hill.

In a seven-and-a-half-minute video clip that he posted on social media, not only did the body builder-turned-movie star-turned-Republican politician compare last week’s events in Washington D.C. to Kristallnacht, but did so with the self-assured “authority” of someone born and raised in Austria in the immediate aftermath of World War II.

Kristallnacht (“The Night of Broken Glass”) was the Nazi pogrom against Germany’s Jews on Nov. 9-10, 1938, which involved the smashing of storefronts, synagogues, schools and hospitals. Right off the bat, Schwarzenegger describes this as “a night of rampage against the Jews carried out … by the Nazi equivalent of the Proud Boys.”

This would be laughable if it weren’t such an egregious distortion. The Nazis were not “equivalent” to a gang of American and Canadian extremists who cropped up in 2016. If anything, it’s the other way around, and even that’s an immoral stretch of the imagination.

To strengthen his analogy, Schwarzenegger recounts having grown up “in the ruins of a country that suffered the loss of its democracy … surrounded by broken men drinking away the guilt over their participation in the most evil regime in history.”

His father was one such man, who “would come home drunk once or twice a week, and he would scream and hit us and scare my mother. I didn’t hold him totally responsible because our neighbor was doing the same thing to his family, and so was the next neighbor over. I heard it with my own ears and saw it with my own eyes. They were in physical pain from the shrapnel, and in emotional pain from what they saw or did.”

According to Schwarzenegger, “not all of them were rabid anti-Semites or Nazis. Many just went along, step by step, down the road.”

It all started, he says, “with lies and lies and lies, and intolerance. So, being from Europe, I’ve seen firsthand how things can spin out of control.”

Before proceeding to savage U.S. President Donald Trump, he assures the Twittersphere that he doesn’t believe America is on the path to becoming Nazi Germany. However, he warns, “we must be aware of the dire consequences of selfishness and cynicism.”

Yes, Schwarzenegger asserts, Trump “sought to overturn the results of … a fair election. He sought a coup by misleading people with lies. My father and our neighbors were also misled with lies, and I know where such lies lead.”

While the naturalized American uses his Austrian background to give credence to his false likening of the Capitol Hill violence to Kristallnacht—and disgustingly suggests that Trump’s “lies” resemble those of the Third Reich—he also seems not to know the meaning of the word “coup.”

As inexcusable as the violent break-in of the U.S. Capitol building was, it was not an actual attempted coup. It was a vile expression of rage on the part of people whose behavior neither I nor any of my fellow Trump supporters condone. Trump’s actions in the wake of his electoral defeat, which became clear following vote recounts, too, were unacceptable.

In fact, they completely undercut the many accomplishments that he made during the past four years. Even worse, they led to the loss of the Senate to the Democrats and handed the left its most coveted gift: the moral high ground. In one fell swoop, the months of looting and rioting by Black Lives Matter and Antifa thugs in cities across America were erased. And all the ideological battles that we conservatives have been waging against the cancel-culturalists went up in smoke.

To make matters even more depressing, the pro-Trump camp instantly became divided with those daring to criticize the president for not doing us proud by bowing out gracefully and working with other Republicans to try to rectify the situation in 2024 being called traitors.

In his diatribe, spoken in soft tones for greater effect, Schwarzenegger calls Trump a “failed leader [who] will go down in history as the worse president ever.”

Actually, Trump’s downfall was not the fault of his policies—many of which, such as the Abraham Accords, will go down in history as stunning achievements—but rather of his hubris and big mouth. In this respect, he’s a tragic figure whose time in office will be the subject of much study—and deservedly so.

Schwarzenegger isn’t concerned about the man himself, however, who he says “will soon be as irrelevant as an old tweet.”

No, it’s “those elected officials who have enabled his lies and his treachery” that the Californian with an Austrian accent bemoans. He feels it’s his duty, then, to remind them of how Teddy Roosevelt, America’s 26th president, defined patriotism—“[standing] by the country … not … by the president.”

Another late U.S. leader he invokes is John F. Kennedy, who “wrote a book called Profiles in Courage. A number of members of my own party, because of their spinelessness, would never see their names in such a book. I guarantee you. They’re complicit with those who carried the flag of self-righteous insurrection into the Capitol.”

Luckily, says Schwarzenegger, it didn’t work. “Our democracy held firm. Within hours, the Senate and the House of Representatives were doing the people’s business and certifying the election of President-elect [Joe] Biden. What a great display of democracy.”

America, he continues, “will come back from these dark days and shine our light once again.” He then calls on Republicans and Democrats alike to join him in bolstering Biden.

His message to the president-elect is: “If you succeed, our nation succeeds. We support you with all our hearts as you seek to bring us together. … [W]e stand with you today, tomorrow and forever, in defense of our democracy from those who would threaten it. May God bless you and may God bless America.”

It’s a worthy sentiment, to be sure. But it isn’t one that was extended to Trump in 2016 or afterwards by anyone who didn’t vote for him. Nor is Schwarzenegger’s professed love for America rampant among the radicals in the Democratic Party.

Indeed, if there’s one thing they’ve made plain about their views, it’s that the United States was born in sin and lives on in infamy. Shame on Schwarzenegger for conveniently leaving that perilous reality out of the equation.