Home Op-Eds The Houthis and the Jews 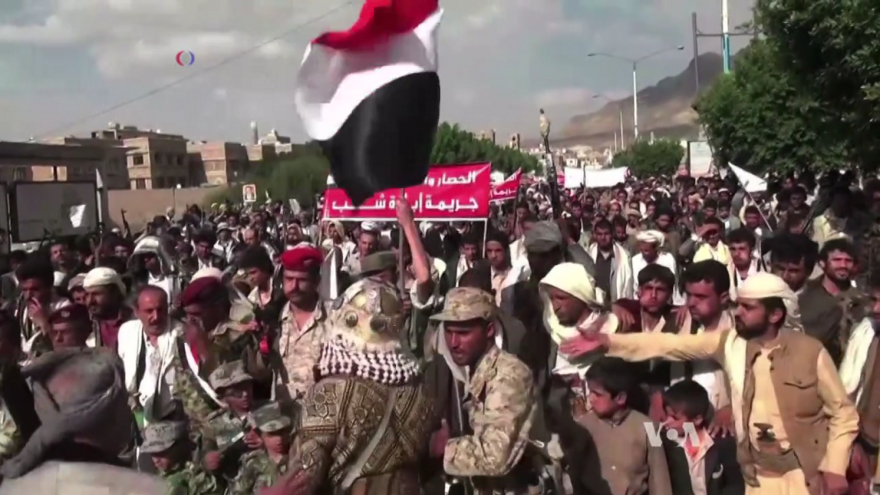 The following are remarks that the author delivered to the European Organizations Union for Peace in Yemen and the Yemeni Coalition of Independent Women, at the conference, “Terrorism & Violations of the Rights of Minorities in Yemen,” on the sidelines of the 48th Session of the UNHCR, Geneva, Switzerland on Sept. 20.

In addressing the Houthi militias’ violation of the rights of the Jewish religious minority of Yemen, one of the most ancient indigenous peoples in world history, I think it is important for us to start at the beginning, with the founder of this militia group: the radical Shia Hussein Bedreddin al-Houthi, who was trained and “educated” in Iran by the regime.

It thus comes as no surprise that he started agitating against Yemeni Jewish communities long before the breakout of the civil war in 2015.

The U.S. State Department under the Trump administration designated the Iranian regime as not only the Number One state sponsor of terrorism in the world, but also as the greatest state sponsor of anti-Semitism in the world. Therefore, what we find in the radical ideology of hatred towards Jews and Israel espoused by al-Houthi is an exact mirror reflection of the radical hatred of Jews and the Jewish state by al-Houthi’s sponsor state, Iran.

The Iranian regime’s obsessive anti-Semitism is a motivating pillar of the regime’s ideology. With that knowledge, it is easy to understand that just as the Iranian regime chants at all official occasions, “Death to America, Death to Israel,” the official Houthi slogan is also “Death to America. Death to Israel.” But the latter goes one step further by adding the phrase: “Curse the Jews.”

While  al-Houthi was killed in 2004, the group has since then been led by his brother, Abdul-Malik, and Hussein’s teachings still play a significant role in the ideology of the Houthi militias. In fact, Hussein al-Houthi’s sermons to this day dominate the Houthi website.

Just like his state sponsor, Iran, which annually marks a day dedicated to the hatred of Israel—a day that the Iranian regime has termed “Al-Quds [Jerusalem] Day”—in an Al-Quds Day sermon just three months after the 9/11 attacks, we find him at times mirroring the Iranian regime’s Jew-hatred and at times using its language verbatim. So, in this same 2001 speech, he made the claim that the 9/11 attacks were a Jewish conspiracy and that “the Jews are really ruling the world.”

He went to call Jews “filthy,” to compare Jews to “apes and pigs” and to call on his followers to commit genocide against the Jews, stating that Arab and Muslim nations “will not be delivered from the evil of the Jews except by their eradication, and by the elimination of their entity,” Israel.

Unfortunately, this ideology of hatred did not die with Hussein al-Houthi, but continued to flourish under the leadership of his brother over the years, which now also includes the indoctrination of children in Yemen.

According to a 2021 report issued by the Institute for Monitoring Peace and Cultural Tolerance in School (IMPACT-se), the Houthis have “made education a core tenet of the campaign to spread its influence over the Yemeni region.”

The report goes on to state that the educational materials the Houthis have created contain explicit anti-Semitism, including manipulated Holocaust-related imagery. Children are encouraged to fight against the “tyranny of the Jews.” Israel is referred to as a “cancerous tumor.”  The Houthi slogan, “Death to Israel, curse on the Jews,” is “repeatedly shown throughout the materials.”

“These Houthi educational materials mimic much of the Khomeinist rhetoric of the Iranian regime” stated IMPACT-se CEO Marcus Sheff.

These sentiments were echoed  by Yahya Al-Yinai, a spokesman for the Yemeni Teachers Syndicate, who told The Daily Telegraph in April that the Houthi militia had overhauled the teaching curriculum and installed its supporters as principals in nearly 90 percent of the schools it controls.

Al -Yinai went on to accuse Iran of orchestrating the changes in a policy of “cultural colonialism” to spread its revolutionary ideology in Yemen.

In fact, and in a very worrying sign for the people of Yemen, the IMPACT-se report indicated that the Houthis’ textbooks sought to indoctrinate children to sacrifice their own lives.

Sheff told The Telegraph that the Houthis appeared to have “no red lines” in their curricula. “The closest we have seen to being this extreme is ISIS materials,” he said.

There is also much video evidence that has surfaced online over the years showing the Houthis performing the Nazi salute during ceremonies and military recruitments, all the while shouting “Death to America; death to Israel; curse the Jews.”

In Nov. 2020, the Yemeni embassy in Washington released a statement condemning the Houthis for “unabashedly” showcasing their “appalling anti-American and anti-Semitic rhetoric” during a police academy graduation ceremony in Sanaa that was posted on Twitter. The video footage reveals Houthi police cadets performing the Nazi salute while chanting for the death of America and Israel and for the damnation of the Jews.

This hateful ideology, stemming from Iran and being spread now by the Houthi Iranian proxy, is meant to create enemies for the Yemeni people where there are none; and it is meant to divide people by religion—Muslim against Jew, Christian, Baha’i and all others.

Today, I stand before you by invitation of Muslim friends who reject this hatred and division. I am a Jewish woman who was born in Iran myself. And like the Jewish victims of the Houthis who were forced to flee their beloved and ancient homeland of Yemen after thousands of years, I and my family, too, were forced to leave our beloved and ancient homeland of Persia, which is modern-day Iran, at the hands of this Iranian regime and its anti-Semitism.

However, I know for a fact that millions more people in the Middle East and North Africa reject this Iran-sponsored and -created hatred than embrace it.

Al-Houthi in his sermons went so far as to try to depict Islam’s Prophet Muhammed as being anti-Jewish. What he failed to mention was the partnership that Muhammed had with a local rabbi, Mukhayriq—a learned leader of the tribe of Tha’labah at the time. Rabbi Mukhayriq lost his life fighting beside Muhammed in the battle of Uhud on March 19, 625 C.E. Today, there is named after him and about to launch the Mukhayriq Project of which I am a proud board member. It is a project that brings together Muslims and Jews in a partnership that reflects the bonds of friendship between Islam’s Prophet Muhammed and Rabbi Mukhayriq.

I want to turn now to the consequences of this Houthi Doctrine of anti-Semitism that has directly victimized what was a tiny Jewish community in the country and that, due to the Houthi anti-Semitism, has brought to an end an indigenous Jewish population that traced back its history more than 2,000 years.

Most of the Jews of Yemen had been airlifted to Israel in the 1950s as part of Operation Magic Carpet, with nearly half a million Israelis today being of Yemeni descent.

And yet, even prior to the civil war in 2015, we saw the Houthis begin their campaign against the indigenous Jewish community with their 2007 expulsion of approximately 70 Jewish individuals who lived in and were forced to flee from the Houthi stronghold town of Sa’adah or face physical harm.

What we have seen since that time is a Houthi campaign of ethnic cleansing against the Jews of Yemen.

After their 2007 expulsion from Sa’adah, these Jews mostly relocated to Yemen’s capital, Sanaa, but in 2014, the Houthis seized power there, too. The following year, Houthi officials publicly beat two boys in Sanaa for refusing to disavow their Judaism.

Mohammed Al-Samawi, a Yemeni national and interfaith activist who had to flee the country after the Houthi takeover of his native city of Sanaa, told The Forward this year: “The Houthis are trying to spread these stereotypes and conspiracy theories against the Jews. It’s extremely sad. If you look at the history of Yemen—the capital city, Sanaa—the architecture came from the Jews, the music came from the Jews, the food even.”

Yemeni embassy official Salem Baafi argues that Al-Houthi’s worldview now drives his successors to “target and hurt the most marginalized people in Yemen … seeking to eliminate all it deems unworthy,” such as the small number of Jews and Baha’is in Yemen, while committing other abuses against women and children.

Indeed, one by one, the Houthis have expelled each of Yemen’s Jews, and this past March, the last of Yemen’s Jews were expelled with 13 members of three different families being forced to flee their homes in Sanaa.

One member of this group told the press: “History will remember us as the last of Yemeni Jews who were still clinging to their homeland until the last moment. We had rejected many temptations time and time again, and refused to leave our homeland, but today we are forced.”

One of the expelled family members shared with the Al-Awsat newspaper, “They gave us a choice between staying in the midst of harassment and keeping Salem a prisoner or leaving and having him released.”

The reference here is to Levi Salem Musa Marhabi, was was wrongfully arrested and detained in 2016 by Houthi intelligence forces.

On Nov. 10, 2020, the U.S. State Department, for which I was privileged to serve at the time as Deputy Envoy to Combat Anti-Semitism, called for the immediate and unconditional release of Marhabi, noting that he had been wrongfully detained by the Houthi militia for four years, despite a court’s ordering of his release in Sept. 2019. Then-U.S. Secretary of State Mike Pompeo also called for the release of Marhabi, stating that the United States “stands with the Yemeni Jewish community.”

Since that time, the American Sephardi Federation and the Combat Anti-Semitism Movement—the world’s largest umbrella organization that brings together hundreds of thousands of people and organizations—have each activated a campaign for the release of Marhabi.

The time is well overdue for the Houthis to end this egregious flouting of international law and release Marhabi, whom they have now wrongfully detained for close to five years and whose health is deteriorating.

Marhabi is an innocent man; his only crime is that of being a Jew. The Houthi militias who are wrongfully detaining him need to understand that the international community is watching them; world Jewry is watching them.

The Houthis and their patron state, Iran, will be held responsible for the well-being of this Jewish man. We will not rest until he is released.

Ellie Cohanim is a senior fellow at the Center for Security Policy and former U.S. Deputy Special Envoy to Monitor and Combat anti-Semitism.