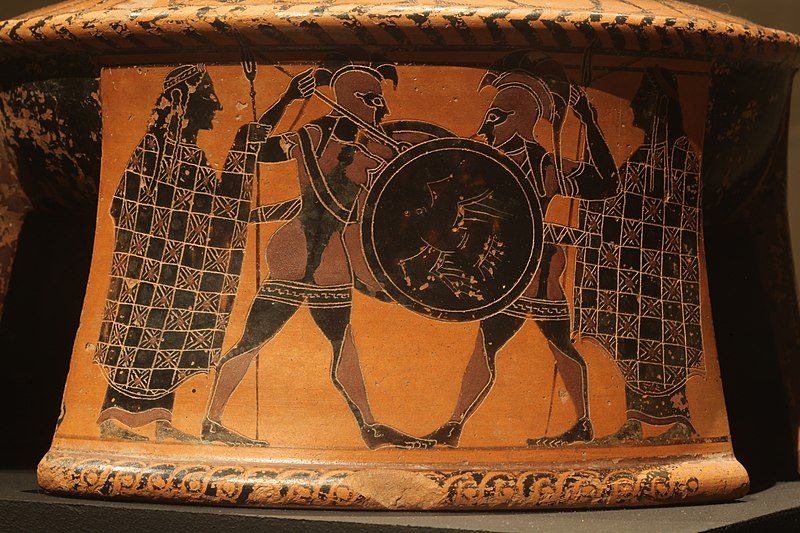 The philosophy of Immanuel Kant is useful to knit literary readings. With some Kantian principles and without ancient erudition we have attained hermeneutic conclusions on Homer, conclusions which coincide with the Homeric opinions of masters like Matthew Arnold and Alexander Pope. Homer says (The Iliad, book three, translated by George Chapman):

Disgraces will not ever last; look on their end; on us
Will other gods, at other times, let fall the victor’s wreath,
As on him Pallas put it now. Shall our love sink beneath
The hate of Fortune? (1).

If there are various “gods” in The Iliad, then the philosophical paradigm that rules it is “atomism”. A place with different forces which have not been derived from a general force by a scientific mind, is a place that seems to have constant, multifarious, conspicuous miracles. A place with persistent miracles causes an ubiquitous superstition. And superstition is the font of the uncertainty of all polytheists. It is so difficult, then, to make inferences when one is reading The Iliad. Edward Gibbon, the great rationalistic historian, with charm explained the vicissitudes of the Roman Empire by means of that uncertainty. He says: “We have already seen how various, how loose, and how uncertain were the religious sentiments of Polytheists” (2). Between the ancient artist and the modern artist there is an enormous frontier, namely: the scientific habits of thought, which reduce “the riches of nature” (3) to mere deduced and accidental facts. Before Homer an arrow is a thirsty death, but before a modern reader or skald it is a vulgar substance that flies toward something (4). One of the great literary triumphs of Homer was, therefore, to be able to handle a thumping blend of vivid entities.

The Homeric versification contains the ensuing interesting line: “Disgraces will not ever last; look on their end”. If our world is not a whole entity, but an accidental conjunct knotted by different substances and forces, then every deed, and every proposition on deeds, is a synthetical fact or proposition without rules which a thinker could interpret. To live among singular accidents causes moveable passions, a constant blizzard of hopes and fears. Our scientific and Christian age has made Greece a negative and “intimate adviser of Europe”, as Ortega y Gasset says (5). I said “negative” because we are desirous of a sameness, of a stillness, in the sphere of feelings (6). Between the ancient poet and reader and us there is another stately barrier, viz: a monotheism with ropes of science, or in most simple words, a terrible want to make mathematic inferences from a new god, the atom. Therefore, one of the main traits of The Iliad, or rather of Homer’s works, is the multifarious panoply of meanings (7) which are abridged in every fight, dead, inroad, etc.

If we do not know the original tongue of Homer, then we are unable to utter a good judge on his style. But it is possible to analyse his metaphors. The selected Homeric lines say that Fortune hates a specific love, that is to say that she has human features. If there are different elements that have compounded our world, and if every fact is accidental, or rather a fruit of freedom, then, the idea of “spirit” (the sum of immateriality, incorruptibility, personality and immortality), of immaterial substance, arises before our eyes. Homer spiritualises every object, every circumstance, every quality, and, meanwhile, he gives “living words”, as Pope affirms. It is too easy, therefore, to spin terms when here and there things are spirits, or immaterial substances, or in ancient language, “daemons” (8). Homer sings: “Shall our love sink beneath/ The hate of Fortune?”. “Love”, here, is an entity with the capacity to penetrate another substance, the “hate” of another substance, Fortune. Kant would say that Homer is using quantitative metaphors. These verses of Homer are, according to Jan Parker, “free-flowing, open, rhyming lines” (9). Homer had, at the same time, a savage and philosophical mind.

To believe that we are a spirit or an eternal and immaterial substance leads us to the idea of “I”. Our “I” has a dire enemy, whose name is “Fortune”, that big force which causes more pain than pleasure, more tears than intelligent reflections, and more debts than coins. The human being, before the arrival of Christianity, overall was ruled by tragic sentiments. To fight against Fortune forms a tragic heroism, or in words of Freud, such a fight has more or less satisfied the human “compulsion of destiny” (10). Honest tragic sentiments are impossible in a society guided by the concept of Providence (we say “credo quia consolans”, but not “credo quia absurdum”). For this reason Homer, with verisimilitude, can describe fights between humans, heroes and gods, who were erased by martyrs, angels and our Trinity. Or in Pope’s terms, just Homer, and just within the historical time of Homer, was possible to hoist such “a system of machinery for poetry”. Homer’s work is, in sum, an army of warlike miracles disguised as men… who sing like gods.-