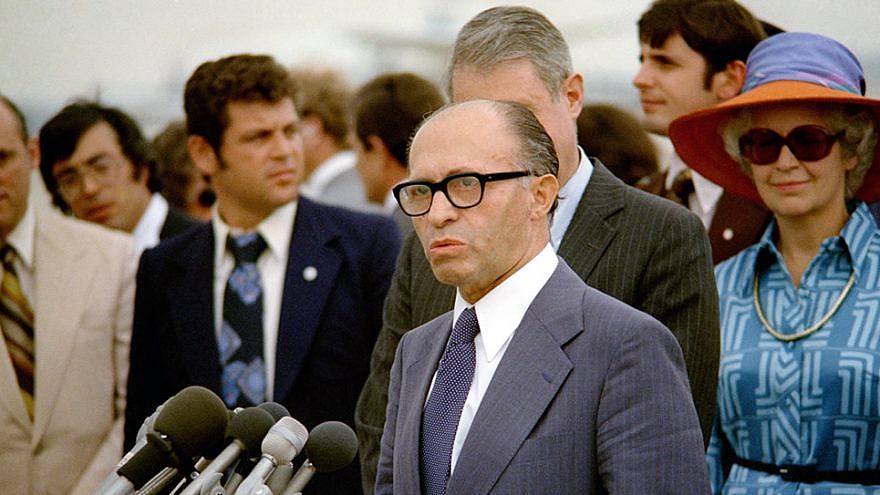 Winston Churchill once wrote, “The farther backward you can look, the farther forward you are likely to go.”

I thought of those words recently after watching “Upheaval,” a new documentary film produced by the Hidden Light Institute in Denver about the life of Menachem Begin, Israel’s sixth Prime Minister. Begin’s public life ended almost three decades ago, but this film offers insights and lessons in leadership, civility, anti-Semitism and Israel that are surprisingly relevant today.

Menachem Begin was born in 1913 in Brest, Russia, now Belarus. Motivated by strong Zionist ideological beliefs and the anti-Semitism he saw around him, he became active in the Zionist youth movement, and in 1940 was arrested and imprisoned in a Soviet gulag. His parents and most of the rest of his family were murdered in the Holocaust.

After his release from a Soviet labor camp, he made his way to Israel, then administered by the British under a League of Nations mandate. There, he became a leader in Irgun, an underground Zionist paramilitary organization that had split from the mainstream Zionist movement to pursue the more aggressive goal of forcing the British army out of Israel by publicizing British repression and carrying out acts of violence against British personnel.

During his time in Israel’s top job, Begin showed that he was capable of making both war and peace. Not only did he preemptively attack and destroy an Iraqi nuclear power facility in 1981, but he also made peace with Egypt and Anwar Sadat, the first such accord between modern Israel and an Arab country.

That is the outline of Begin’s life and career, as depicted in compelling detail in “Upheaval.” And these are the lessons I draw from it for our time:

1) Leadership: Begin was fiercely ideological and partisan, but in times of crisis, he always put the interests of his country ahead of ideology and party. In the Altalena affair, for example, when the mainstream Zionist leadership ordered its soldiers to fire on this ship bringing Irgun soldiers and weapons to Israel, Begin ordered his troops not to return the fire. After the Holocaust, he did not want Jews killing Jews in a civil war. Instead, the Irgun and Begin abandoned the ship. Another classic example of his patriotism took place in 1967 after Israel was attacked by Arab armies. Begin immediately offered to join a unity government with his Labor Party political opponents to protect the security of the State of Israel. Leaders in America and elsewhere in the world could learn a lot from his patriotism.

2) Civility: In opposition and in power, Begin conducted himself with dignity and spoke in words that could be fiery but always eloquent and respectful. We need much more of that today in our public discourse. It would elevate both society and the practice of governing.

3) Anti-Semitism: Rising anti-Semitism in Europe and fear of a coming catastrophe led Theodor Herzl to form the modern Zionist movement at the end of the 19th century, and Menachem Begin to join and lead it in the 20th century. Their worst fears were realized during World War II and the Holocaust. Today, in the 21st century, anti-Semitism is rising again, often violently. While the State of Israel provides a sanctuary that did not exist then, millions of Jews in the Diaspora do not want to leave their homes. For them, the lesson of Begin’s life, distilled in “Upheaval,” is to fight anti-Semitism where it appears when it appears and to stop it before it spreads and grows more violent and deadly.

4) Israel: One of the most outrageous charges leveled against Israel, including in response to the recent conflict between Israel and Hamas, is that it is a white colonial power suppressing people of color. Begin’s life will teach anyone who views the film that the Jewish people were forced from their homeland and kept from it by a succession of colonial empires beginning with the Romans and ending with the British. The Jewish state was re-established in 1948—not by a colonial power, but in the wave of popular national self-determination movements that liberated people throughout the world after the Second World War and up to our own times. And since 1948, Israel has been a liberal democracy governed by law in which all of its citizens have equal rights. Begin’s election as prime minister in 1977 with strong Mizrachi support also shows the importance of non-European immigrants in modern Israeli history. Today, in fact, a majority of Israelis are people of color.

5) Personal Values: An endearing side of Begin that emerges movingly in this film is the simplicity of his life and his loyalty to family and friends. The death of his wife, Aliza, sent him into a depression that contributed to the end of his public life. When he left office, friends had to raise money to find a small apartment where he could live. And he chose not to be buried on Mount Herzl, where most of Israeli’s great leaders have been buried, but on the Mount of Olives next to the graves of his wife and two Irgun comrades who were killed fighting alongside Begin in the battle for Israel’s independence.

As Churchill understood, looking back at Menachem Begin’s life can and should help us go farther forward now.

Joseph I. Lieberman served as a U.S. senator from Connecticut from 1989 to 2013. A former member of the Democratic Party turned Independent, he was the Democratic nominee for vice president of the United States in the 2000 election.