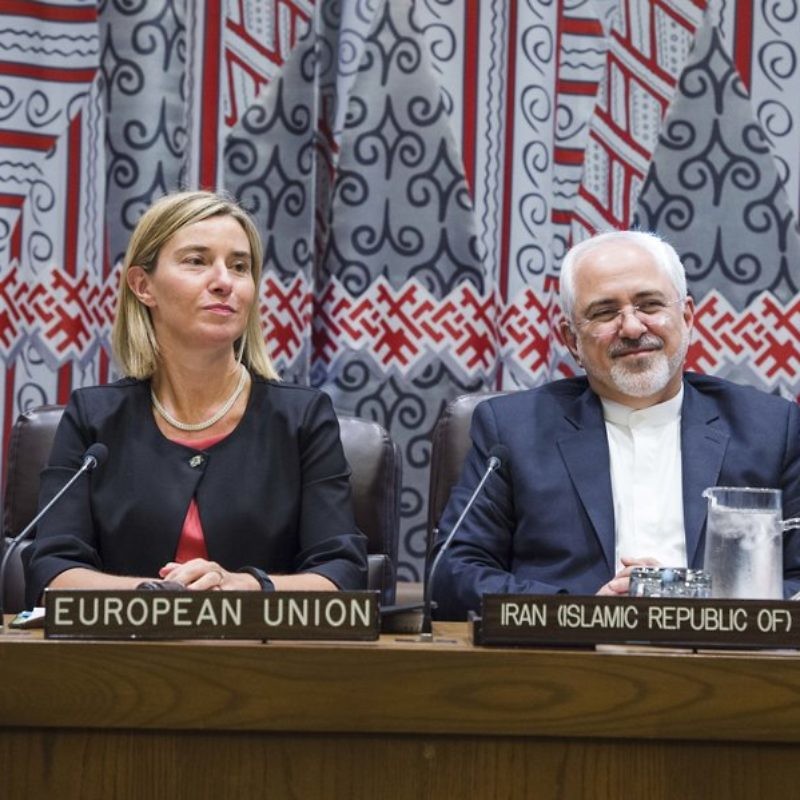 When the Obama-brokered Iran nuclear deal was signed in 2015, one of the many spurious reasons offered for that agreement was that it would help the supposedly moderate Iranian President Hassan Rouhani draw the sting of the Islamic regime’s extremism.

Now Rouhani is no longer bothering to conceal his real side. Addressing the annual Islamic Unity Conference in Tehran last weekend, Rouhani called Israel a “cancerous tumor” that was formed as a result of World War II.

Meanwhile Iran’s Supreme Leader, Ayatollah Khamenei, urged conference participants to “strengthen the Islamic awakening and resistance movement in the region as much as they can, because the only way for the salvation of the region is to spread this spirit and thinking.”

Yet despite this deranged, genocidal call to arms, European governments are still trying to circumvent U.S. policy against Iran in an attempt to keep the nuclear deal alive.

Last August, U.S. President Donald Trump reimposed sanctions designed to cripple the Iranian regime. In September, however, the E.U.’s foreign policy chief, Federica Mogherini, announced that a special E.U. payments channel would use a system of credits to facilitate compensation for goods traded between Iran and Europe. This would allow some trade to proceed without the need for European commercial banks to transact payments with Iran.

The initiative recently faced collapse when American pressure on Austria and Luxembourg prompted them to reject E.U. requests to host the company that would handle this special channel. A few days ago, however, The Wall Street Journal reported that France and Germany had stepped in to host the company, and the British government was considering joining them.

The Europeans’ eagerness to continue to trade with Iran is disgusting. The United States lists Iran as the world’s principal state sponsor of terrorism. The regime has been in a state of self-declared war against the West since it took power in 1979. It regularly denies the Holocaust and re-states its intention to wipe Israel off the map.

It is funding, arming and training Hamas in Gaza and Hezbollah in Lebanon, where more than 120,000 Iranian rockets are pointing at Israel; it supports the Bashar Assad regime in Syria, where there are now Iranian troops on Israel’s border; it is supporting the Houthis in the civil war in Yemen in order to attain unrivalled dominance in the region.

So it should simply be unconscionable to trade with Iran. Yet the Europeans are bending every sinew to continue to do so.

The behavior of France and Germany in spearheading the subversion of U.S. sanctions is particularly odious. France’s President Emmanuel Macron, the E.U. fanatic who by his own account is a cross between Napoleon and Jupiter and has taken to lecturing the world about the supposed evils of nationalism, runs a country in which Jews are being regularly attacked and murdered by Muslims.

His foreign ministry has said there is no doubt that Iran’s intelligence ministry was behind a foiled attack last June on an Iranian opposition group in Paris. Yet Macron opposes U.S. sanctions on the grounds that this would not improve regional stability. Instead, he is busy trying to enable the continued flow of money to prop up the Iranian regime. Is this what he means by improving regional stability?

Germany’s hypocrisy is stomach-turning. In 2008, its chancellor, Angela Merkel, came to Israel to say: “The Shoah fills us Germans with shame. I bow before the victims. I bow before the survivors and before all those who helped them survive.” Germany, she said, would always stand by Israel’s side; and she singled out Iran as the greatest threat to its security.

Yet although her foreign office condemned Rouhani’s remarks “in the strongest possible terms,” Merkel is now Europe’s principal champion of his regime.

In the words of Dr. Josef Schuster, president of the country’s Central Council of Jews: “It seems paradoxical that Germany—as a country that is said to have learned from its horrendous past and which has a strong commitment to fight anti-Semitism—is one of the strongest economic partners of a regime that is blatantly denying the Holocaust and abusing human rights on a daily basis. Any trade with Iran means a benefit for radical and terrorist forces, and a hazard and destabilization for the region.”

As Benjamin Weinthal recently wrote in Tablet magazine, the explanation may not lie merely in Germany’s huge export trade with Iran, worth $3.42 billion last year. It may also be a pathological refusal to forgive Israel for the Holocaust, as demonstrated by its preoccupation with turning Israel into a punching bag.

Germany’s pious memorializing of the Holocaust, he suggested, “can be a way for German politicians to inoculate themselves against criticism for their unwillingness to confront the lethal anti-Semitic Islamic regime in Tehran.”

The risible justification offered by Britain, France and other countries for opposing the renewal of sanctions is that they still believe the nuclear deal they helped broker will prevent Iran from developing nuclear weapons.

This is, of course, the opposite of the truth. The deal cements Iran’s ability to produce nuclear weapons, at best delaying it by a few years; Iran is still continuing to develop weapons capable of carrying nuclear warheads; and in addition, through sanctions relief, Britain and the rest of the deal’s enablers have poured money into strengthening Iran’s infernal agenda of arming and training terrorists around the world, and expanding its power in the Middle East and Africa.

Britain’s continued support for this pernicious deal has also had dreadful consequences for one of its own citizens. In April 2016, Nazanin Zaghari-Ratcliffe, who has dual British/Iranian nationality, was jailed in Tehran on trumped-up charges of anti-Iranian activity. She remains cruelly separated from her 4-year-old daughter, as well as her husband, in Britain.

Yet although the British Foreign Secretary Jeremy Hunt has begged and pleaded with his Iranian counterpart for her release, Iran has been cynically using her as a bargaining chip to pressure Britain to help further undermine U.S. sanctions.

Feebly, Hunt has called on Iran to stop using Zaghari-Ratcliffe and other dual nationals as tools of diplomatic leverage. But the regime can see that Britain will not act against it, and that it actually opposes the renewal of sanctions aimed at changing its behavior.

As a result, Hunt is being played for a fool. The truth is that the continued detention of Zaghari-Ratcliffe is the direct result of Britain’s craven appeasement of Iran.

And the further truth, which so many American Jews and others find so unpalatable that it must be denied, is that the person who has taken the most powerful and effective action against the genocidal anti-Semitism of the Islamic Republic of Iran is President Donald Trump.