Home Op-Eds The Perils of Ilhan Omar: The Weird Way She Identifies With Jews 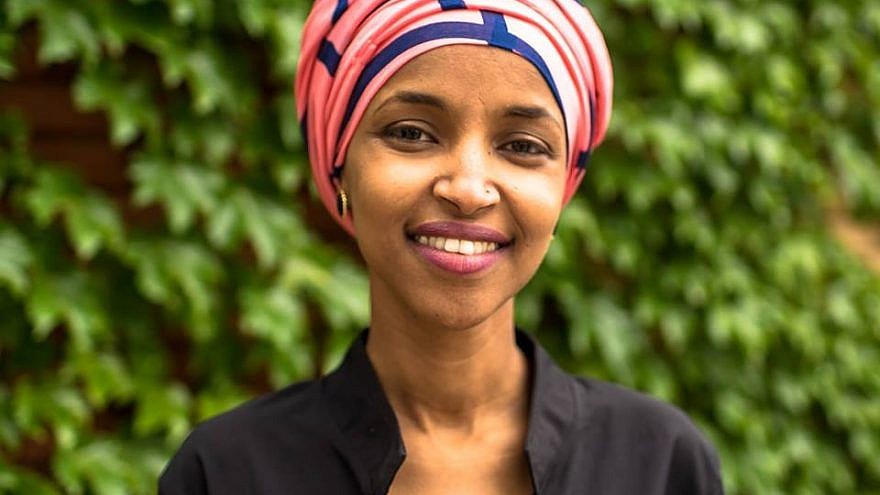 At long last, American Jews can bond with Democratic U.S. Rep. Ilhan Omar, at least in one sense. She now understands how we feel when she mouths off about Israel’s supposed oppression of the Palestinians, which compounds our fear that her followers will harm us.

After all, Omar comprehends the peril of being condemned by their colleagues after lying about Israel. “They have no concept for the danger they put her in by skipping private conversations & leaping to fueling targeted news cycles around her,” Rep. Alexandria Ocasio-Cortez said on Twitter.

Kind of like the danger she likely generates for Jews whenever Omar and friends open their big mouths?

Every time they slam Israel sans evidence, American Jews could wonder if their bombast incites violence against them. With expressions of anti-Semitism rising, especially in the midst of the 11-day confrontation between Israel and Hamas last month, violence against Jews has also risen.

We cannot quantify the impact of their rhetoric on criminals who physically harm Jews. Are assailants acting on their own, or are they responding automatically when Omar and company blame Israel – and by association American Jews – for all the ills befalling the Palestinians? Liberals called out former President Trump for inciting his right-wing followers to invade the Capitol building on Jan. 6.

The answer can probably be found in the middle. Whether from the right or the left, reckless rhetoric likely influences the mindsets of these criminals. At the same time, these same criminals have already developed poisonous attitudes that are reinforced by Omar’s remarks.

The latest clash between Omar and American Jews commenced on June 7 when she urged an investigation of human rights abuses committed by both Hamas and Israeli security forces, which occurred during a virtual exchange with Secretary of State Antony J. Blinken about the International Criminal Court in a hearing, according to The New York Times.

Omar followed up by sending a puzzling message via Twitter: “We must have the same level of accountability and justice for all victims of crimes against humanity. We have seen unthinkable atrocities committed by the U.S., Hamas, Israel Afghanistan, and the Taliban.” The firestorm that followed was blamed by Ocasio-Cortez as late as Sunday on “right-wing vitriol” as she responded to questions from Dana Bash on CNN.

Such “right-wing vitriol” was voiced by 12 Jewish Democrats led by Rep. Brad Schneider of suburban Chicago, who in recent weeks voted to investigate the Jan. 6 Capitol Hill attack and to admit Washington, D.C., as our 51st state with equal voting power in Congress. Rep. Jerry Nadler of Manhattan, an impeachment leader against Trump, is among the 11 Democrats who joined Schneider. That’s “right-wing vitriol” for you.

Calling on Omar “to clarify” her comment, Jewish Democrats released this statement: “Equating the United States and Israel to Hamas and the Taliban is as offensive as it is misguided. Ignoring the differences between democracies governed by the rule of law and contemptible organizations that engage in terrorism at best discredits one’s intended argument and at worst reflects deep-seated prejudice…False equivalencies give cover to terrorist groups.”

“Her comments were absolutely mischaracterized,” Ocasio-Cortez said, adding that this “was not a generous interpretation.”

Ocasio-Cortez, who represents parts of the Bronx and Queens, was just beginning to define the problem. That Omar’s words must be “interpreted” is problem enough. An elected official who uses confusing language about a volatile issue is playing with fire.

Likewise, it is intriguing that they explain themselves after the damage is done. That is the pattern with Omar and other Israel-bashers, just as Trump’s provocations must be explained by his staff. Unlike Trump, Omar and friends deserve credit for fashioning their own latter-day explanations.

Omar, who represents Minneapolis and some of its suburbs, ultimately relented, saying she “was in no way equating terrorist organizations with democratic countries with well-established judicial systems.”

But in between, she wrote, “The Islamophobic tropes in this statement are offensive. The constant harassment & silencing from the signers of this letter is unbearable.”

Unbearable? What isn’t “unbearable” in politics? Who forced her to run for elected office?

The Times reports that Ocasio-Cortez was joined by three other colleagues in defending Omar, and between the five of them they played four cards – race, religion, gender and ideology. They are all women of color and both Omar and Rashida Tlaib are Muslims. Omar moved to Minneapolis from Somalia and Tlaib’s family is from Israel’s West Bank; her grandmother lives near Ramallah.

Rep. Pramila Jayapal of Washington: “We cannot ignore a right-wing echo chamber that has deliberately and routinely attacked a Black, Muslim woman in Congress, distorting her views and intentions and resulting in threats against Representative Omar and her staff. We urge our colleagues not to abet or amplify such divisive and bad-faith tactics.”

Tlaib: “I am tired of colleagues (of both parties) demonizing @IlhanMN. Their obsession with policing her is sick. She has the courage to call out human rights abuses no matter who is responsible.”

Rep. Cori Bush, St. Louis, also a black woman: “I’m not surprised when Republicans attack Black women for standing up for human rights. But when it’s Democrats, it’s particularly hurtful. Enough with the anti-Blackness and Islamophobia.”

Enough of what? Republicans may have hidden agendas, but their fellow Democrats range from moderate to liberal in ideology and frequently vote for the same progressive policies and programs as do these five. More than half the Jewish Democrats who signed the statement represent sizeable Jewish populations that consistently vote Democratic in most elections.

Five of them are women and all have supported policies that benefit all races and religions.

Perhaps Omar’s friends might be justified in supporting her comments, but it is beyond despicable to suggest racism, sexism, etc. as motives. Omar and Tlaib in particular have been repeatedly insensitive to Jewish feelings with their Israel-badgering.

They should know by now that most Jews feel a strong emotional tie to Israel since it was established in part as the Jewish homeland. Some Jews may criticize Israel’s policies and take seriously criticism by others, but plain hostility toward Israel – like that offered by Omar and Tlaib – is sure to antagonize them.

They do not care about Omar’s race or religion. They only care about what she says.

They need to care about another factor – how wild accusations of “an apartheid state,” dual loyalty and other offenses will resonate in the public sphere. Are Omar’s comments producing, or at least contributing to, violent acts of anti-Semitism?

It’s a fair question considering Omar’s complaint that her condition is “unbearable.”

Though threats against Omar for whatever reason are inappropriate, she brings much of it on herself. She frequently exploits her place at the public pulpit to offend people who have done nothing to her. Maybe the reality that such people exist at all is what makes Omar’s life so “unbearable.”