Home Op-Eds The ‘right’ way to be anti-Semitic, according to Human Rights Watch 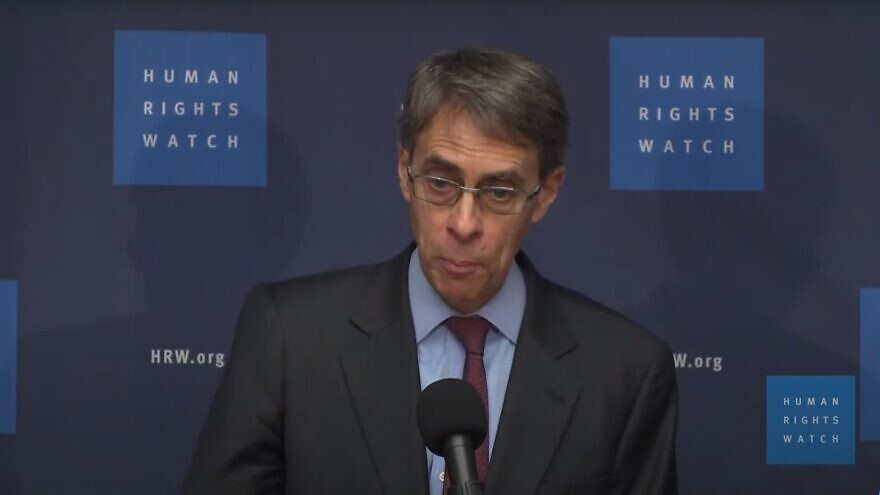 Only a generously funded, celebrity-endorsed NGO utterly convinced of its own rectitude would have the chutzpah to proffer advice on combating anti-Semitism, just weeks after it labeled the world’s sole Jewish state as the faithful reincarnation of apartheid South Africa’s white minority regime. True to form, that is exactly what Human Rights Watch (HRW) did last week.

Not everything about HRW’s analysis of the “spate of anti-Semitic attacks” targeting American Jews that erupted in tandem with May’s renewed conflict between Israel and Hamas was objectionable. The assaults were a reminder that “the far right has no monopoly on antisemitism,” wrote Eric Goldstein, the author of the analysis. “One thing is clear,” he concluded. “To assault or use ethnic slurs against a Jew because of what the government of Israel may be doing is antisemitism.”

While this might seem like HRW extending an olive branch to the Jewish community after years of blaming resurgent anti-Semitism around the world on Israeli policies towards the Palestinians, alas that is not the case. On closer inspection, HRW’s institutional view of what anti-Semitism is and how it should be countered turns out to be a middle finger rudely thrust in our direction—so much so that it’s hard to know where to begin.

The choice of Goldstein to expound on HRW’s understanding of contemporary anti-Semitism is probably as good a place as any. Why is an individual whose job title is “acting executive director, HRW Middle East and North Africa Division” opining about hate crimes (though he never classifies them as such) targeting a relatively small minority community in the United States? How exactly is a Middle East specialist qualified to give insight on the best practices to secure our synagogues and schools, or fighting anti-Semitic hate speech online, or protecting visibly identifiable Jews who are especially vulnerable to street violence, or educating law enforcement about anti-Semitic trends—or any of the other real, painful practical challenges our community is presently dealing with?

But if one’s goal is to assist the Jewish community by arresting the current anti-Semitic tide, one cannot help being astonished by the issues that Goldstein ignores, and those, in turn, that he addresses.

To begin with, he mentions two of the many anti-Semitic outrages recorded in May around the country—the assault on Jewish diners at a Los Angeles restaurant and the savage beating of a Jewish man in Midtown Manhattan. When one reports on hate crimes, it is customary to identify the perpetrators with as much accurate information as possible, and were Goldstein writing about an assault on Jews committed by white supremacists or neo-Nazi skinheads, he likely would have no qualms about disclosing this critical fact in order to enhance readers’ understanding of the episode at hand.

Yet Goldstein’s analysis of the May events gives the impression that the authors of these assaults were nameless and faceless, motivated only by a misguided notion of what solidarity with the Palestinian people involves. The assailants in Los Angeles were referred to merely as “a group,” while the attackers in New York City were simply “assailants.” No more detail was provided.

We know from ample coverage in the Jewish and general media that the vast majority of individuals arrested during the recent attacks, including those in LA and Manhattan, were Arab-American males, principally in their late teens or early 20s. For a mix of ideological and institutional reasons, this fact is too unpalatable for HRW to wrestle with. The organization fears being accused of fanning anti-Arab and anti-Muslim racism, and is reluctant to criticize the “oppressed” in their struggle against the “oppressor,” and so this aspect of the problem is duly buried.

Again, this is because the ultimate purpose of HRW’s analysis is to salvage anti-Zionism from the sewer of anti-Semitism. Inconvenient realities that undermine that neat division—like the aforementioned attacks, or the Islamist convoy that cruised through London’s Jewish neighborhoods threatening through a megaphone to “rape your daughters,” or the Muslim demonstrators in the German city of Gelsenkirchen who chanted “S**t Jews!” in ecstatic unison—just get in the way.

“Biden should ensure the envoy he nominates is also committed to rolling back the efforts of the Trump administration to brand vast swaths of Israel criticism as antisemitic, which ill-served the cause of combatting actual antisemitism,” wrote Goldstein. “Actual antisemitism,” it would seem, is restricted to those incidents in which Jews are physically assaulted and racially abused. Anything more subtle—like denying the right of the Jewish people to statehood, or singling out the Jewish state for the type of social distancing that all of us personally experienced over the last year—is not antisemitism at all. Indeed, the real problem consists of those in the Jewish community who say otherwise, along with the working definition of anti-Semitism endorsed by the International Holocaust Remembrance Alliance (IHRA) that unhelpfully includes anti-Zionist expressions as part of the rubric.

At the end of May, Goldstein’s boss at HRW, Ken Roth, tweeted that it was “WRONG to equate the Jewish people with the apartheid and deadly bombardment of Prime Minister [Benjamin] Netanyahu’s government.” Make no mistake, this is the old, discredited message of “Israel bad, Jews not necessarily so” that the anti-Zionist left has pushed for decades—and now HRW, in the name of defending human rights, is taking the lead.