Home Op-Eds What is it with J Street and anti-Semites? 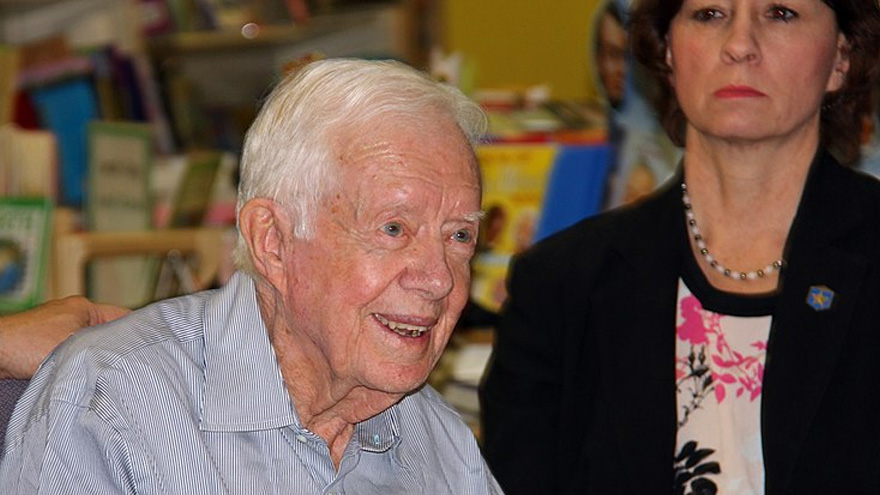 Why does J Street keep honoring and defending individuals who have made anti-Semitic remarks?

The latest is former President Jimmy Carter, who will receive an award from J Street at its upcoming convention on April 18. I’m not saying that Carter’s numerous attacks on Israel—as ugly and unfair as they were—constituted anti-Semitism. Not even his accusation that Israel’s treatment of Palestinian Arabs is worse than the Rwandan genocide in which 800,000 people were massacred.

No, I am referring to what Professor Deborah Lipstadt wrote in her essay, “Jimmy Carter’s Jewish Problem,” in The Washington Post, on Jan. 20, 2007. She wrote that in his responses to criticism of his anti-Israel book, Carter “has relied on anti-Semitic stereotypes in defense.”
Lipstadt continued: “Carter has repeatedly fallen back—possibly unconsciously—on traditional anti-Semitic canards. … Carter reflexively fell back on this kind of innuendo about Jewish control of the media and government. Even if unconscious, such stereotyping from a man of his stature is noteworthy. When David Duke spouts it, I yawn. When Jimmy Carter does, I shudder.”

The former Secretary of State was the keynote speaker at J Street’s 2015 convention. At first, it must have seemed odd that the overwhelmingly liberal and Democratic members of J Street would be honoring and applauding a lifelong conservative Republican. But apparently, Baker’s views on abortion and taxes were forgiven and forgotten in J Street’s enthusiasm for Baker’s harsh anti-Israel policies.

Evidently, J Street was not bothered by the fact that Baker’s hostility to Israel sometimes crossed over into hostility to Jews.

There was, of course, Baker’s infamous 1992 outburst, “F*** the Jews. They don’t vote for us anyway.” (The quotation came from unimpeachable sources. It was first revealed by former New York City Mayor Ed Koch, who later said his source was then-Secretary of Housing Jack Kemp, who heard Baker say it firsthand.)

But that wasn’t all. Baker was also reliably reported to have said: “Jews remember the Holocaust, but they forget insults as soon as they smell cash.” (The source was David Bar-Ilan, then one of the editors of The Jerusalem Post, quoted in Ma’ariv March 5, 1992.)

And according to The Los Angeles Times (March 7, 1992), Baker also referred to pro-Israel members of Congress as “the little Knesset.”

We need to add Linda Sarsour to the list of prominent individuals whose anti-Semitism has not deterred J Street from embracing them.

Sarsour’s hostile statements about Israel and Zionism have been as vicious as they come. She actively promotes the anti-Semitic BDS movement. She tweeted (in 2012): “Nothing is creepier than Zionism.” She told The Nation that “There can’t be … room [in the feminist movement] for people who support the State of Israel.” She calls for the replacement of Israel with a “State of Palestine.” Sarsour shared a stage with Rasmea Odeh, the convicted murderer of two Hebrew University students, and declared that she was “honored to be on this stage with Rasmea.”

Yet J Street founder and president Jeremy Ben-Ami signed a 2017 letter declaring that criticism of Sarsour is “dangerous, disingenuous and counterproductive,” charging that she has been “falsely maligned, harassed and smeared.” The letter’s only caveat was this tepid sentence: “We may not agree with Sarsour on all matters.”

So, what’s going on here? What is it with J Street and anti-Semites? I’m not a psychiatrist. I don’t pretend to know what goes on inside the heads of Jews who are so committed to bullying Israel that they will honor and even defend individuals who have made anti-Semitic remarks, as long as those individuals further the cause of undermining Israel. All I can say is that the decision by the Conference of Presidents of Major American Jewish Organizations and other umbrella groups to reject J Street’s applications for membership has been proven right time and again.