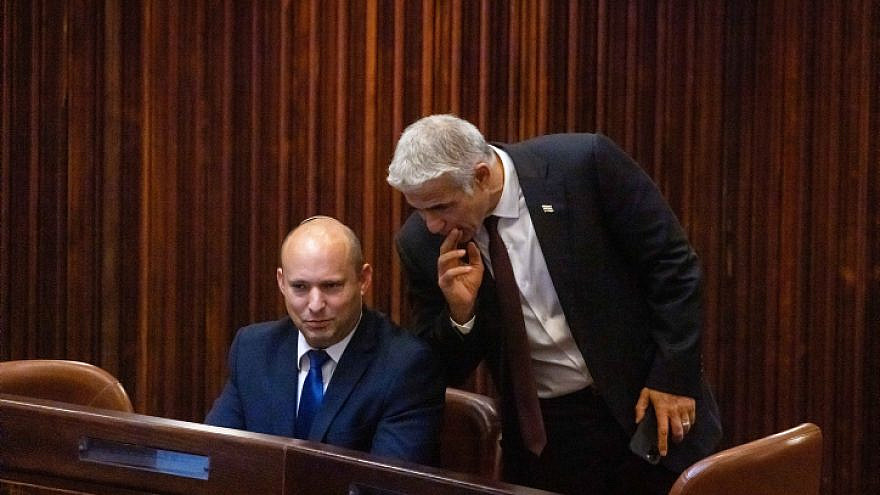 The storm of controversy now engulfing Israel revolves around one question. What sort of government do Yair Lapid and Naftali Bennett intend to swear in?

According to Lapid, Bennett and their media chorus, Israel is about to get a “unity government.” Once it is formed, all will be sweetness and light. The political fights that have afflicted us will fade away as the nation undergoes a collective therapy session.

The other side—the political right—insists that the two men are forming a leftist government that is willing to sacrifice Zionism to achieve their highest goal: ousting Benjamin Netanyahu from the Prime Minister’s Office.

Last Friday night, journalist Sharon Gal reported on Channel 13 News how the Islamist Ra’am Party is presenting the agreement they signed to its voters in Arabic. In its written statements and in television interviews on Arabic-language channels by Ra’am Knesset members, the Islamist party claims that Lapid and Bennett agreed that their “unity” government will end enforcement of building and zoning laws in Arab-Israeli villages and cities. Orders to destroy illegal structures will be frozen. Fines for illegal buildings will be canceled.

So as far as Ra’am is concerned, the political right’s assessment of the Lapid-Bennett government is accurate. Lapid and Bennett’s government will jettison Zionism.

Lapid and Bennett’s refusal to deny Ra’am’s claims, or reveal the actual agreements, prevents the public from checking the veracity of Ra’am’s assertions while lending them credence.

Beyond hiding information from the public about what they have agreed to do once in power, Lapid, Bennett and their friends in the media and the permanent bureaucracy are also working hard to silence their critics.

Over the weekend, in a gross overstep of his powers, Israeli Security Agency (Shin Bet) Director Nadav Argaman placed his thumb on the scales on behalf of Lapid-Bennett and their controversial government. Resonating leftist propaganda that delegitimizes all criticism of leftist policies from the right as “incitement,” Argaman released a statement Saturday where he insisted, “the incendiary discourse [around the Lapid-Bennett governing coalition] is liable to lead to physical harm.”

Likewise, for the past decade and a half, Israeli Arab politicians and religious leaders have issued a steady stream of incendiary and often openly anti-Semitic statements rejecting Israel’s right to exist and demonizing its people. Ahead of the Arab Israeli pogroms in mixed Jewish-Arab cities countrywide last month, those statements escalated. But Argaman never had anything to say about any of it.

So the first time the security chief decided to issue a warning about political violence is now, at the height of a heated and completely legitimate public debate around the formation of a government dominated by leftist parties that will not reveal whether or not it has pledged to effectively end Israeli sovereignty over Israel’s non-Jewish citizens and cede the Negev to irredentist Bedouin who openly seek the destruction of the state and are aligned with extreme Islamist elements.

If Lapid and Bennett were really forming a unity government, their supporters on Twitter and Facebook wouldn’t be banning right-wing voices or censoring and banning right-wing opinion pieces. And yet, since last week, Facebook and Twitter have banned information about a scheduled protest outside the home of Yamina Knesset member Nir Orbach. They also suspended the accounts of Netanyahu’s son Yair Netanyahu and several other well-known right-wing writers and activists. Whatsapp banned the accounts of an entire community of right-wing political activists.

If they were forming a unity government, last week Yamina MK Ayelet Shaked wouldn’t have felt it necessary to lock Orbach in a room in the Knesset and ban him from speaking to anyone who opposes what she and Bennett are doing with Lapid and the rest of their coalition partners.

If this were a unity government, we could reasonably expect that Bennett and Lapid would eagerly put all their agreements on the table and let the public read them. And we could expect the multitudes to rush to join and support their great Zionist effort to restore tranquility, happiness, sweetness and light to the people of Israel.