Home Op-Eds What’s behind the obsession with US aid to Israel? 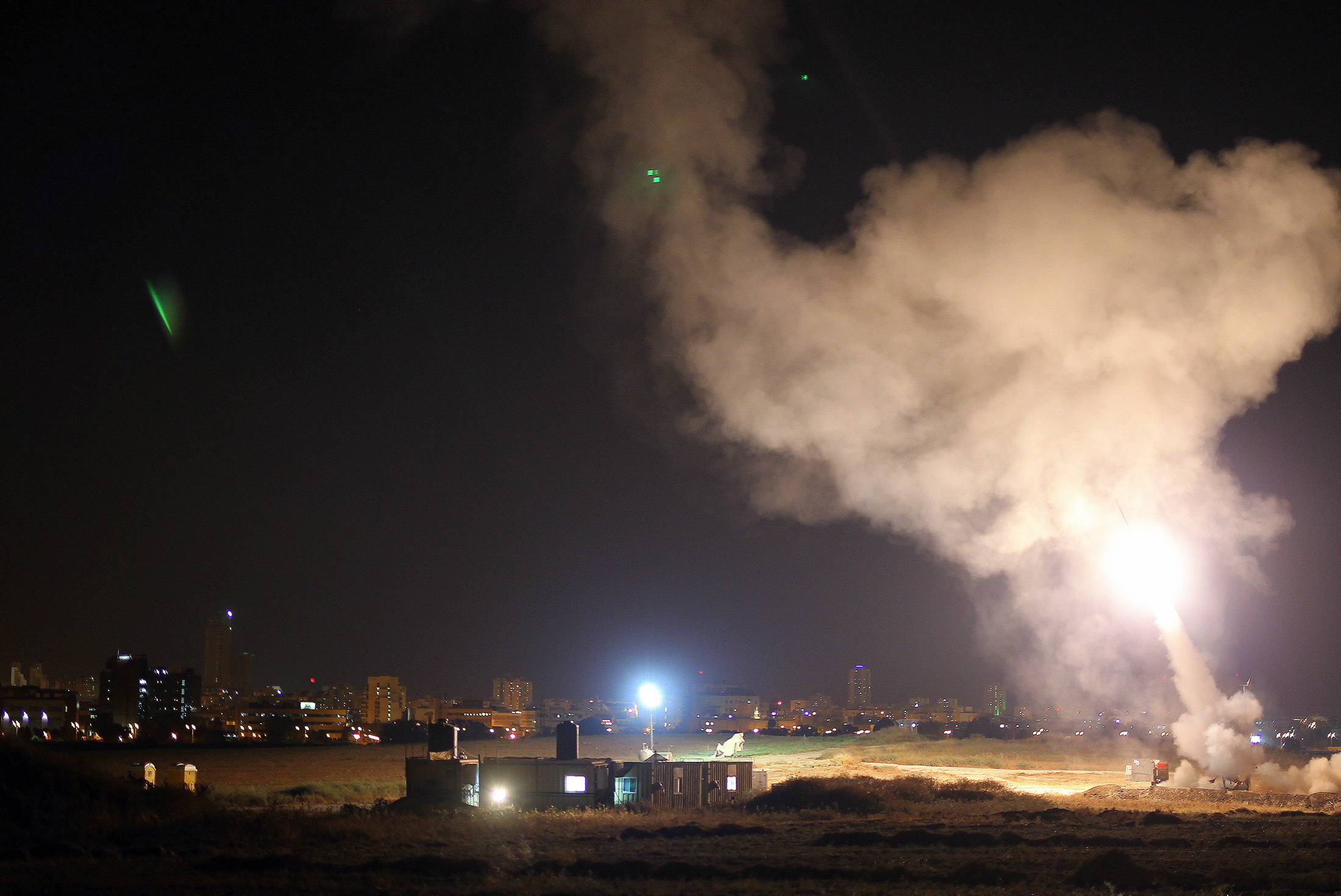 While Vice President Kamala Harris has been conspicuously absent from her alleged role in securing the nation’s border, she did find time recently for an impromptu visit with students at George Mason University in Virginia. At that meeting, one of the tendentious students, clearly schooled in the heterodoxy in which oppressed and oppressor animate all discussions about the world, raised the issue of the Israeli-Palestinian conflict.

The student, who identified herself as being Yemeni and Iranian, questioned Harris’s claim that activism, even by woke activists like herself, presumably, can result in substantive change.

“ … [A] few days ago there were funds allocated to continue backing Israel,” the student told Harris, adding, with words that were not corrected by the vice president and which subsequently drew criticism from many quarters as a result, “which hurts my heart because it’s ethnic genocide and displacement of people, the same that happened in America, and I’m sure you’re aware of this,” and she expanded on that idea by adding that “a lot of taxpayer money is allocated for funding the military, whether it’s in backing Saudi Arabia or in Palestine.”

One thing is clear in the behavior and rhetoric of the hate-Israel crowd: It has become adept at focusing obsessively and singularly on Israel and Israel alone, how it behaves, who its victims are, what human and civil rights of which it allegedly deprives the Arabs, and what crimes against humanity it continues to perpetrate in its brutal, unlawful occupation of the lands of an indigenous people. And a key part of that dissection of every part of Israel’s existence is the amount of aid the Jewish state receives from the United States—“a lot of taxpayer money,” as the student put it, some $3.4 billion annually.

There can be an honest debate about which countries should receive aid and in what amounts, but one thing about our support of Israel is noteworthy: in the entire existence of the Jewish state, the United States has never had to put an American soldier’s boots on the ground to specifically defend Israel. While we have been loyal in material support and supplying intelligence, diplomacy and armaments to Israel, American lives have not been lost defending it. Compare that, for instance, to the human cost of our recently terminated operations in Afghanistan, where since 2001 more than 2,300 U.S. soldiers were killed and 20,660 injured in action.

The critiquing of U.S. military aid to Israel has been a recurring theme at universities as part of the campus war against the Jewish state. When in May this year Israel moved to suppress rocket attacks from Gaza aimed at Jewish neighborhoods, predictably, instead of supporting Israel’s actions to protect its citizenry from the homicidal aggression of Hamas terrorists, students and faculty from dozens of universities issued statements of solidarity with the Palestinians. And the issue of U.S. aid to Israel was a bulleted point in many of those statements, along with a demand that the amount be either reduced or eliminated altogether.

An example of this sentiment can be found in the May 12 “Statement by Palestine Student Groups at Harvard University on Violence Against Palestinians,” in which the woke students claimed that America is complicit in the injustices they perceive by being the primary funder of Israel’s aggression and militarism. “The United States is not a passive third-party observer of the ongoing settler colonial violence against Palestinians, but an active participant,” the tendentious statement read. “Israel is the largest cumulative recipient of U.S. foreign and military aid. In 2016, the United States passed the largest military aid package ever given to any country, providing $38 billion in military assistance over the next decade.”

In a May 18 opinion piece in the Daily Princetonian, “Princeton University community statement of solidarity with the Palestinian people,” undergraduates and graduate students, along with some 25 Princeton faculty, published a similar statement that asserted that, “We also refuse the ‘two-sides’ and ‘evenhandedness’ narrative that ignores and conceals the meaningful differences between Israel—one of the most heavily militarized states in the world that receives $3.8 billion in military aid annually from the United States—and a Palestinian population resisting occupation and oppression.”

The scrutiny given to funds flowing to the Jewish state is not confined to academia, of course. In July, a pro-Palestinian teacher’s group, New York City Educators for Palestine, issued a virulently anti-Israel statement because, they trumpeted, “we have no choice but to speak out against the injustice being committed against the Palestinian people.”

Particularly odious was the suggestion in the statement that aid to Israel should cease, and that the aid is an example of Jews depriving New York taxpayers of funds that might be spent domestically. “Over $3.8 billion yearly of taxpayer money funds the purchase of weapons by the Israeli military,” the statement read. “New York City alone gives almost $145 million dollars [sic] a year to the Israeli military. … This is money taken from the families of New York City by a nuclear power with one of the most technologically advanced militaries in the world … .”

These woke educators, like the students and faculty who express similar sentiments concerning aid to Israel, apparently have no issue with the huge sums of U.S. aid given in 2020, for example, to such countries as Afghanistan, Egypt ($1.445 billion), Iraq ($1.017 billion), Jordan ($2.388 billion) and Ukraine (more than $1.5 billion in security aid between 2014 and 2019), countries that are not reliable strategic and diplomatic partners, and not useful in sharing technology and intelligence in the way that Israel is and does.

In the case of Afghanistan, the U.S. Department of Defense recently reported that our country’s total military expenditure from October 2001 until last December was $825 billion, not even including another $130 billion spent on reconstruction projects, for a total of just under a trillion dollars for a country that, after all of that blood and treasure, has almost immediately after our withdrawal reverted to a medieval theocratic state under Taliban rule.

And aid is not limited to the Middle East, obviously. The International Institute for Strategic Studies issued a report indicating that the United States spends some $36 billion annually on maintaining a military presence and capability in Europe. More than 170,000 active-duty personnel are currently deployed to overseas locations in some 140 countries—a presence that the Department of Defense Comptroller’s Office has estimated to cost American taxpayers over $24 billion in 2020.

Rarely mentioned, too, is the fact that, since the end of World War II, American forces have been in Japan, as well as in South Korea since the outbreak of the Korean War. The price tag for that military presence is in the billions.

The recent effort by the congressional “Squad” to kill funding for Iron Dome, the defensive technology that enables Israel to neutralize incoming rockets launched towards Israeli civilians by terror groups to its north and south, indicated very clearly that for Israel-haters—in politics, academia, unions, NGOs, and other elite institutions and organizations—it’s not enough to merely strip Israel’s ability to defend itself with offensive weapon and military technology.

They even revealed that their pathological loathing of the Jewish state is so fundamental to their ideology that they attempted—unsuccessfully, as it happened—to strip Israel of a defensive weapon that saves Jewish and Arab lives, alike. So, clearly, the issue is not the dollar amount the U.S. gives in aid to Israel, as it does in similar amounts to many other countries around the world.

Those who obsess about the very existence of Israel—and who focus exclusively on it and what it receives from American taxpayers while they are indifferent or ignorant of aid given to other, less deserving nations—reveal that their anti-Semitic desire to decrease or eliminate funding to the Jewish state can only be motivated by one insidious impulse: a desire to weaken and cause harm to Israel, the Jew of nations.

Richard L. Cravatts, Ph.D., a Freedom Center Journalism Fellow in Academic Free Speech and president emeritus of Scholars for Peace in the Middle East, is the author of “Dispatches From the Campus War Against Israel and Jews.”