Home Op-Eds When the Jew-bashers are Jews 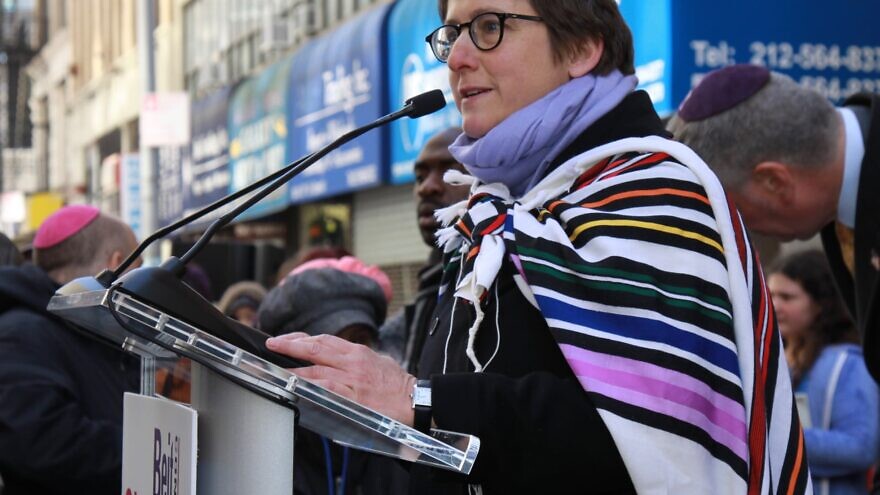 The latest move by President Joe Biden to appall many American Jews as an act of wanton hostility is his appointment of the progressive rabbi, Sharon Kleinbaum, to the U.S. commission on International Religious Freedom.

During Israel’s “Operation Protective Edge” in Gaza in 2014, Kleinbaum read a list of Palestinian and Israeli casualties, including the names of Hamas terrorists, in special prayers during her synagogue’s services. A number of members quit the synagogue in protest.

Her other half, Randi Weingarten, who is president of the American Federation of Teachers, distinguished herself in turn by saying in April that American Jews were part of an “ownership class” in the United States who want to take opportunities away from others.

Such Jewish individuals are routinely used as human shields by Jew-bashers on the left. In Britain, the former Labour Party leader Jeremy Corbyn, who presided over an eruption of Jew-baiting and Israel-bashing in his party, boasted as his friends certain anti-Israel Jews—particularly if they were religious—in order to rebut accusations that he was an anti-Semite.

Those who know nothing about Judaism may therefore think that the malevolent views such Jews express about Israel represent authentic Jewish values. Certainly, many of these anti-Israel Jews themselves think that.

In fact, their values turn Jewish principles of justice and truth on their heads, and their Israel-bashing is but a thin veneer for a hatred of other Jews or Judaism itself.

Part of the explanation for this is the influence of Marxist ideology that now dominates left-wing thinking through “social justice” (which is anything but). Since most American Jews subscribe to this view of the world, they are not only increasingly turning against Israel; they assume, shockingly, that the anti-Jewish precepts of leftist ideology are Jewish ones.

Today, this muddle takes vicious form through the doctrine of intersectionality. This grotesquely demonizes Israel and the Jewish people as representatives of white supremacism, colonialism and racism and holds that their victims are people of color, the LGBTQ community and Palestinian Arabs.

However, the phenomenon of Jews turning against each other reaches deeply back into history with innumerable examples. The very first blood libel is thought to have been promoted by a Jewish convert to Christianity in medieval England.

In his essay On the Jewish Question, Karl Marx wrote: “Money is the jealous god of Israel, in face of which no other god may exist.”

The financier George Soros, who has been the target of much anti-Jewish prejudice, has nevertheless funded anti-Israel initiatives through his Open Society Foundation and nauseatingly blamed the resurgence of anti-Semitism in Europe on Israel’s behavior.

There are many different reasons for such problematic attitudes towards the Jewish people among some Jews.

Marx was the son of Jewish parents who converted to Christianity, itself a principal historical driver of demonization and persecution of the Jews. Soros’s complex personality was almost certainly forged in his experiences in Holocaust-era Hungary.

Today’s intersectional Jew-bashers subscribe to the view of Jews as predators that itself derives in large measure from Marx.

But the distortions go far deeper. Such Jews are often called “self-hating,” but this is a misnomer because they tend to be intensely narcissistic. Moreover, there’s one part of their Jewish ancestry that they do embrace; this is their identification with Jewish victimhood, which they think gives them moral nobility.

So they will talk up their family’s victimization in the Holocaust; or in Britain, they may wheel out as evidence of their “proud” Jewish identity the fact that during the 1930s, their fathers marched against British fascists in London’s East End.

Of course, other people revolt against their own religion, culture or nation. With the Jewish Judaism-haters, however, this takes pathological form. They obsessively seek to expunge Jewish particularism from themselves and the world.

Anti-Jewish Jews are perhaps the greatest danger facing the Jewish people today. Despite being on the left, they make common cause with neo-Nazis and jihadists in seeking to harm the Jews. Wildly over-represented in the universities and cultural elites, they are to be found at the very forefront of campaigns designed to damage the Jewish people.

Take the recent announcement by Ben & Jerry’s that the company would no longer sell its ice-cream in what it calls “the occupied Palestinian territories.”

Although Ben Cohen and Jerry Greenfield sold their eponymous company years ago to British-owned Unilever, they have said that this illegal and discriminatory boycott, which will hit both Jewish and Arab residents of the disputed territories, is “one of the most important decisions the company has made in its 43-year history.”

The boycott was applauded in turn by Kenneth Roth, the Jewish director of Human Rights Watch, which obsessively and maliciously demonizes Israel with serial falsehoods.

And to combat the furious pushback, the Ben & Jerry’s board has brought in Peter Beinart, a Jew who now notoriously argues for Israel’s dissolution and advocates that it should be stripped of its nuclear capability—its last-ditch deterrent against a second Jewish genocide.

In his book The Oslo Syndrome: Delusions of a People under Siege, the psychiatrist Kenneth Levin provides a magisterial analysis of the psycho-pathology of the anti-Israel and anti-Jewish Jew.

Much of this pathology is deeply defensive. Blaming Israel for the murderous war waged against it, writes Levin, provokes an illusion of control over a situation that otherwise would be unbearably terrifying. It’s easier for certain Israelis and Diaspora Jews to believe they can stop the violence by getting Israeli policy changed than it is to cope with the reality that millions of fanatics are bent on Israel’s extermination.

Similarly, such Diaspora Jews believe they can fend off anti-Jewish attacks by ingratiating themselves with the enemies of the Jewish people. Identifying with fashionable social causes appears to offer protection against the charge that the Jews are concerned only with their own interests. Which is why so many subscribe to the “social justice” agenda, equate anti-Semitism with Islamophobia and relativize the Holocaust.

As Levin observes, however: “Yet the path they advocate is no less delusional than that of abused children who blame themselves for the abuse they experience. All too often such children doom themselves psychologically to lives of self-abnegation and misery. In the case of Jews indicting Israel for the hatred directed against it, the misery they cultivate goes far beyond themselves and ultimately, undermines Israel’s very survival.”

Perhaps the most savage analysis of the anti-Jewish Jew was written by Uzi Silber in Ha’aretz more than a decade ago. Jewish anti-Semitism, he wrote, was a condition in which being “more sensitive to pain suffered by members of a group other than (one’s) own metastasizes into a malignant emotional and moral identification with people committed to (one’s) annihilation.”

No other people does this to itself. Attitudes expressed by the likes of Kleinbaum, Beinart, Roth and a myriad others constitute a particular and devastating Jewish tragedy.